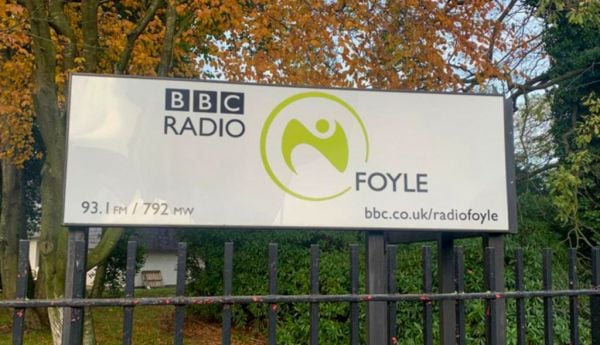 BBC chiefs were warned that proposed cuts to Radio Foyle are “totally unacceptable” as they were challenged about the plan at a meeting in London.

The Mayor of Derry and Strabane Sandra Duffy and local MPs Colum Eastwood and Gregory Campbell attended the Westminster discussions with senior corporation management to outline their objections.

The planned cost-saving measures include the axing of Radio Foyle’s morning news programme and a significant headcount reduction in the newsroom in the northwest.

BBC director of nations Rhodri Davies and the interim director of BBC NI Adam Smyth were among those who attended the meeting.

Afterwards, the mayor described it as a “frank and open discussion”. She said she had reiterated a standing invitation for BBC managers in London to come to the northwest to hear from local people about the potential impact of the cuts.

“At the meeting I stressed the importance of having a regional station in our city and the pivotal role it plays in the local community,” she said.

“I spoke about the uniqueness of Derry and the wider northwest region and shared with them details of the recent public meeting that was held in the Guildhall and the huge outpouring of support that exists across all communities in the northwest.

“I outlined that the proposals to cancel Radio Foyle’s Breakfast Show and hourly news bulletins, with the loss of a number of staff, is totally unacceptable and will be strongly opposed at every opportunity.

Met with senior BBC chiefs today to reiterate my strong opposition to cuts at Radio foyle. It was a very open & frank meeting & I’ve once again invited them to the city to hear what locals have to say.
The fight continues #SaveRadioFoyle
Read more ⬇️https://t.co/kO2gJU6OGr pic.twitter.com/5DB0ksljTT

“I reissued my invite for them to come to Derry, visit the Radio Foyle station and speak to the local community and hear from us directly about what the station means to us and how we need to retain it.

“Nowhere will you find a media team as embedded in the local community as the one at Radio Foyle and I want the BBC senior team to see for themselves what that really means to the BBC audience.

“We are bombarded daily with regional and national news content, but Radio Foyle have a pivotal role in refining and breaking that information down in a local context, and focusing on the issues that really matter to local people.

“I highlighted in particular how The Breakfast Show is a flagship programme that has acted as an institution for the people of Derry and surrounding areas for many years, providing a vital platform for conversations around business, politics and current affairs. I sincerely hope that the BBC chiefs took on board our robust case for scrapping the cuts and allowing the services and jobs to be retained.”

She added: “The fight to save Radio Foyle continues. We will continue to oppose these cuts every step of the way.”

A BBC spokeswoman said: “We had a useful and informative meeting. It allowed us to listen to concerns and to explain our ambitions for Foyle and the service that it provides.

“We also undertook to give a further update on specific points and developments. Our conversations with BBC staff and the trade unions are ongoing.”