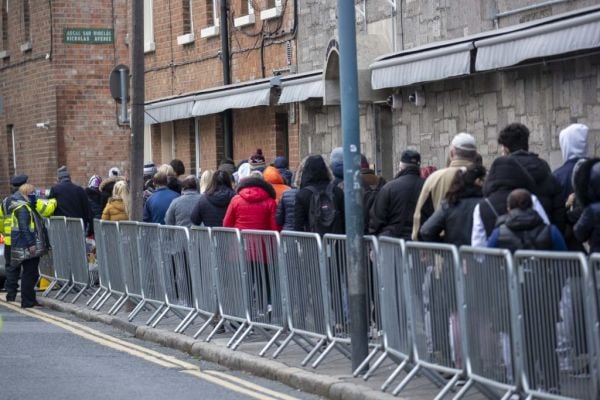 The manager of the Capuchin Day Centre in Dublin has said he doesn’t know the scale of assistance that will be required to help asylum-seekers that arrive in the country.

“We just don’t know what numbers are going to come in. We hope and feel we are ready for them,” Alan Bailey has said of asylum seekers seeking assistance.

“We sat down with staff at 6am this morning and worked out the logistics of a big influx today, we feel we are ready for it,” he told RTÉ radio’s Morning Ireland.

“Once we received the advice from the government that there may be an influx we’ve been getting ready for it, we were here this morning at 6am to get ready in case we have an influx of the people who arrived yesterday.

“We have prepared for at least another 100 people, as long as we have a bit of advance notice it’s no problem for us to have it ready.”

On Wednesday instead of sit down breakfast service the Centre provides a take away breakfast and distributes food hampers.

The average breakfast is 200 people, said Mr Bailey. “A lot of those are rough sleepers who have spent the night walking the streets, normally we open at 8 o’clock but the last few days we have started at 7 o’clock to take them in off the street.

“We’re seeing a lot of new people, people who have never been here before. We like to think they know they can come here because they will be comfortable and we will provide the necessities.”

Mr Bailey said that on the previous occasion when City West had to close to new arrivals the Centre has provided meals, shower facilities and medical services. “They said themselves where they’re coming from is far worse than anything that can happen here. They were grateful.”