Geesala native Clara Barrett has been rewarded for her stunning form for Connacht in the Women’s Interprovincial Championships with a call-up to the Irish Combined Provinces XV, a 43-strong squad which is set to compete in the Celtic Challenge competition against their counterparts from Scotland and Wales over the coming weekends. 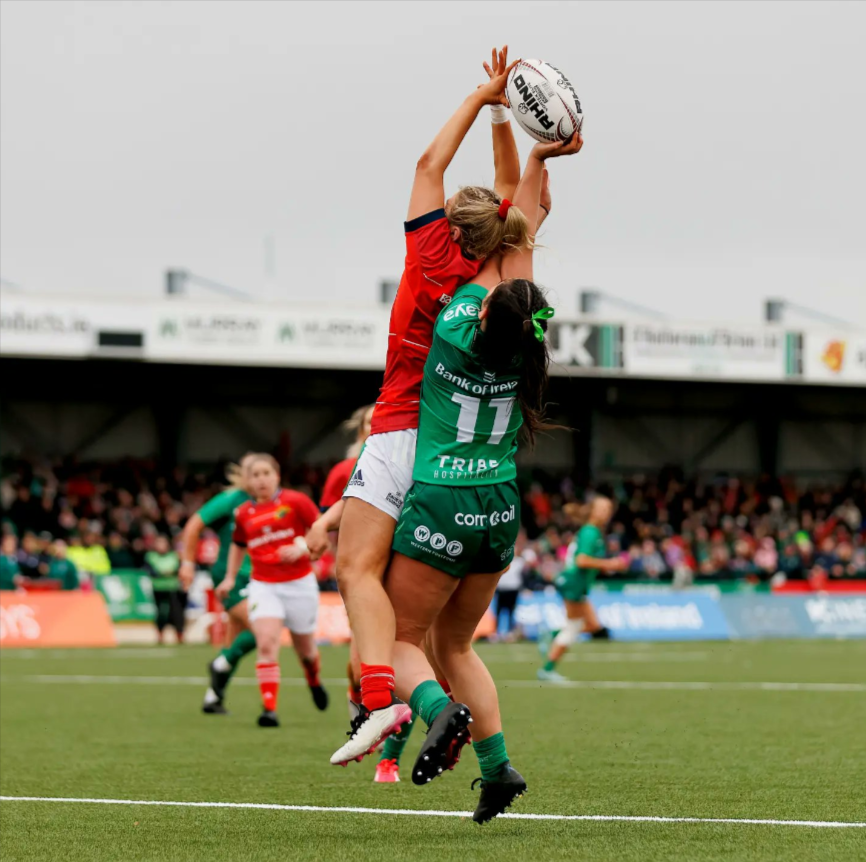 Mayo teenager Amber Barrett looks second favourite to win this high ball from teammate Nicole Fowley above Munster’s Aoife Corey but she does to touch down for her second try of Saturday’s Vodafone Rugby Women’s Interprovincial. Pictures: INPHO/James Crombie

Barrett was named in the squad yesterday (Monday) on the back of another outstanding performance for Connacht in their third and final interprovincial of the season, against Munster at Sportsground in Galway on Saturday.

Teenage star Barrett scored two tries in Connacht’s 24-50 defeat to an excellent Munster side, who claimed the interprovincial title with a clean sweep of three wins from three. 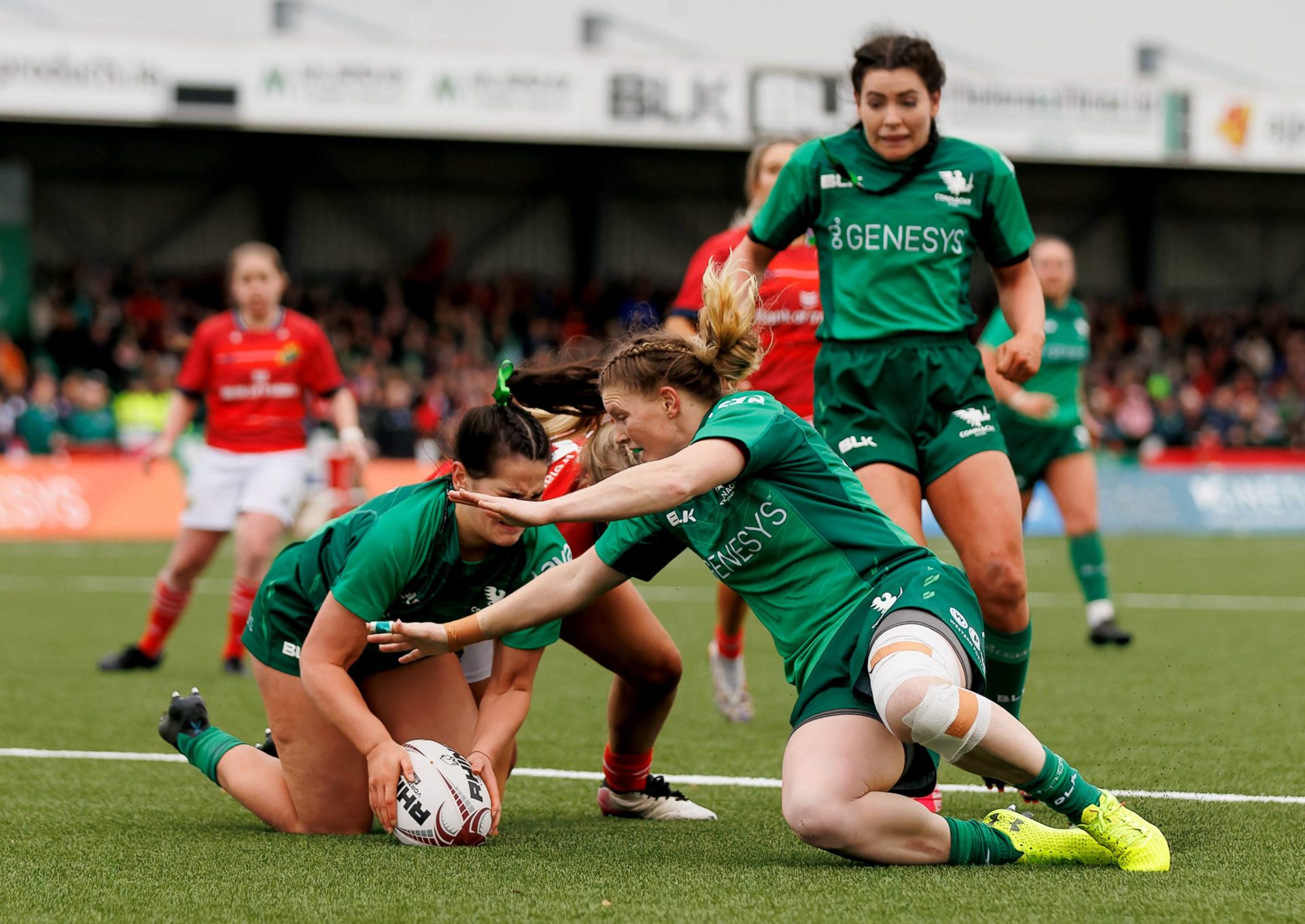 The tries brought to four the number Barrett has scored in her last two games for the western province, following on from her double against Ulster in Connacht’s Round 2 win at Kingspan Stadium a week earlier.

In what was her full competitive debut for her province, Barrett was named Player of the Match.

On Saturday, Barrett’s first try helped Connacht to stay in contention in a first half in which Munster had much the better of the play. She applied a fine finish in the corner to a cross-field kick from out-half Nicole Fowley.

Barrett’s second try, early in the second half, came off a similar kick from Fowley but the Geesala girl had much more to do this time; she went up to seize the ball over Munster full-back Aoife Corey and bring the ball down for the score, showing some brilliant athleticism to convert the chance. 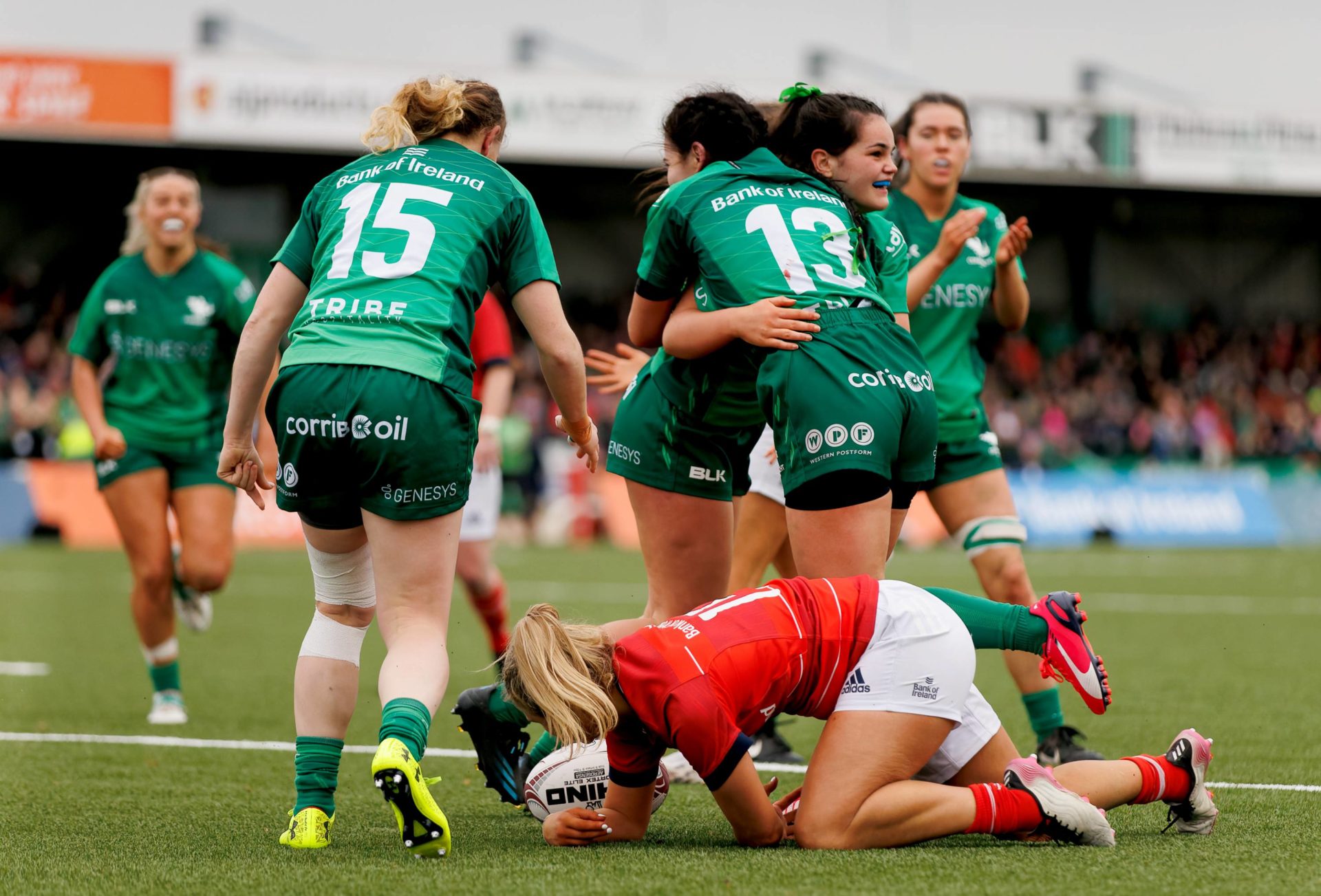 Barrett’s brilliant form over her last two games was recognised on Monday as Ireland head coach Greg McWilliams named his panel for the Celtic Challenge competition.

Barrett is one of just four Connacht players — the others being Meabh Deely, Orla Dixon, and Kayla Waldron — named to the 43-strong squad.

The Irish sides’ first fixture of the competition is away to their Welsh counterparts this Sunday, January 29, at the Cardiff Arms Park.

The Celtic Challenge will lead into the Women’s Six Nations, which begins at the end of March.

If Barrett can continue to show the kind of try-scoring form she has demonstrated over the last couple of weeks, she could yet earn a call-up to the full national squad for the Six Nations.