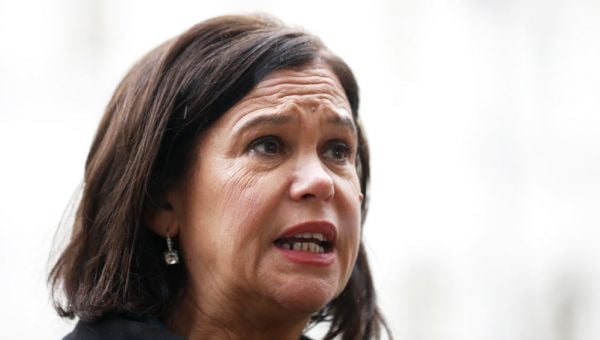 Paschal Donohoe’s ministerial reputation lies in tatters, Mary Lou McDonald said, as she clashed with the Taoiseach on the election expenses controversy.

Addressing the Dáil during Leaders’ Questions, the Sinn Féin leader said the furore over undeclared donations carried the “stench of cronyism and favours for insiders”.

Her remarks prompted heated exchanges with Leo Varadkar, who accused her of “hypocrisy” as he highlighted a series of issues related to Sinn Féin’s finances.

Ms McDonald claimed Mr Donohoe had engaged in an “exercise in concealment and cover-up from start to finish”.

This whole saga with Fine Gael’s Minister has the stench of cronyism and favours for insiders. His ever changing cock and bull story, his ducking and diving to evade accountability has been an exercise in deliberate concealment and cover up from start to finish – @MaryLouMcDonald pic.twitter.com/Jlo3ZpAxiE

“The theme of this controversy is the minister’s ever-changing story, the muddying of waters, the ducking, the diving to evade accountability,” she told the Dáil.

“Mr Stone claims that minister Donohoe asked him twice if he had paid for his postering operation in the 2020 general election and that he told the minister that he had not.

“Then in a eureka moment, as the minister was being questioned on the floor of the Dáil, he remembers that he had in fact paid for the postering in 2020.

“This is the farcical story that the minister asked the Dáil and the public to believe and nobody buys it.

“The reason why Mr Stone has had a sudden recollection is because he knew they were caught out. The idea that this donation simply slipped through the net and slipped out of memory doesn’t stack up.

“The idea that the minister didn’t know, and the businessman simply forgot does not hold any water.

“He has chosen concealment and cover up again and again and at every turn the truth has to be dragged out of him.”

Addressing Mr Varadkar in the chamber, Ms McDonald added: “The minister misled the Dáil last week and now to continue the cover-up Michael Stone falls on his sword, all to protect the minister.

“Taoiseach, are you also standing by this story? Do you also claim that the minister didn’t know and that the businessman simply forgot.

“As head of government, do you stand by this account of events?”

“I’ve heard his explanations over the weekend, spoke to him about it, and I believe him,” he said.

He said during “chaotic” election campaigns it would often be assumed that people offering to put up posters were doing so on a “voluntary” basis.

Mr Varadkar then focused on Sinn Féin’s finances and questioned the party’s conduct on a series of issues, including the decision to declare a multimillion pound donation to electoral authorities in Northern Ireland rather than in the Republic, where rules prohibit such large donations.

He claimed the move was done with “questionable legality”. The Taoiseach said Sinn Féin also failed to include a €7,000 payment to a UK polling firm in its 2020 election accounts declaration.

“So, Sinn Féin, your entire party, filed your returns in 2020 three times because of errors identified by the media and the sums involved were much greater than any sums involved in relation to minister Donohoe here,” he said.

“So, it’s a very different standard that you seem to be trying to apply to him than you would apply to your own party.”

Mr Varadkar then referred to a €1,000 donation made by former Sinn Féin councillor Jonathan Dowdall, who last year was convicted of facilitating a gangland murder in Dublin.

The Taoiseach said Ms McDonald needed to clarify whether the donation was made to her or her party.

“You need to consider revising your own declarations,” he said.

“Your declaration shows that you received a personal donation of 1,000 euros from your friend, gangland criminal and Navan Road torturer John Dowdall.

“Around you are members of your party who claim that that was a donation to your party, that requires you to decide which it was, and to make an amendment to your own declarations deputy, just as minister Donohoe has.”

Ms McDonald accused the Taoiseach of attempting to distract from the central issue.

“If the Minister for Finance has a very faulty memory, I have to say you are of Olympic level competence in trying to breed further distractions,” she said.

The Sinn Féin leader said the “real rub” in the controversy was that a wealthy individual who was the beneficiary of state contracts and was appointed to state boards was a donor to the minister.

She said the “concealment” of the donations was a “real cause for public worry”.

“I put it to you Taoiseach that it is not credible on your part for you to attempt to stand over these donations that were undeclared and the cock and bull story that your colleague has fabricated, after the fact, to try and cover his tracks,” she said.

“Exposing your hypocrisy is not a distraction, it’s simply telling the truth, something that you consistently run a mile from,” he told Ms McDonald during the Dáil exchanges.

“And I think you’ve some brass neck, quite frankly, in that regard, given that your own party had to file your 2020 decorations on three occasions because of a €7,000  payment to a UK polling company that you forgot about until the Irish Times questioned you about it.”

“You know as well as I do, that Government ministers have no role in awarding commercial contracts to businesses,” he said.

“That’s a pure distraction, trying to throw that one out there under coverage of privilege quite frankly.”