Mayo trailblazers get the world of hurling talking 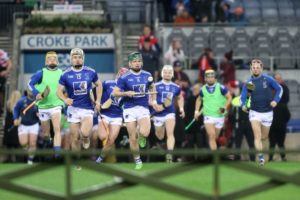 The Boland brothers Fergal and Shane leading the Tooreen team out at Croke Park for their All-Ireland Club IHC final against Monaleen.

By Anthony Hennigan
Time heals. And while it will take time for Tooreen to get over their loss, longer perhaps because of just how close they came and how well they played, amid the dissatisfaction at its ending, they will in time — at least, they should — reflect on their 2022/23 campaign with a huge amount of fondness.
Last Saturday night’s All-Ireland hurling final was a belter, the standard top-notch — better than the uninitiated who tuned in to TG4 probably expected to witness. But even the educated were mightily impressed by the fare served up by Tooreen and Monaleen so thankfully, the post-match commentary was anything but condescending. There was none of that “Aren’t the Mayo boys a great bunch of lads all the same, God love them” sort of guff, only genuine respect and admiration for the standard and style with which they play the game.
Christy O’Connor, a gifted sportswriter, no mean hurler himself, and in Jamesie O’Connor, a brother of Clare royalty, said: “Some credit due to Monaleen and Tooreen, absolutely brilliant game. Lots of wides but the skill level of both teams, the first touch, composure on the ball, plus the quality of the scores was off the charts, As good as you’ll see in Croke Park. Two excellent teams. Epic stuff.”
Former Tipperary goalkeeper and manager Ken Hogan described the intermediate club final as a “wonderful game of hurling” that epitomised what the club and pride in the parish is all about. Another ex-Tipperary hurler Timmy Hammersley, now a performance coach, reckoned Tooreen showed “there is no difference in skill level between hurling teams from so-called weaker counties. Just not enough of clubs.”
Former GAA president Seán Kelly joined in with the plaudits, saying the people of Tooreen were right to be proud of the performance of their players. “I was most impressed by the high standard and great skill of Tooreen. Just ran out of steam but wonderful ambassadors and exponents of hurling,” Kelly said.
A serious debate even broke out online among Galway hurling aficionados, some of them for, some of them against any future admittance of Tooreen to their hurling competitions — a subject we’ll come to. The top and tail though, is that on Saturday night in Croke Park, under the national spotlight, Tooreen broke boundaries, dared to tread where no Mayo hurler had before and made the GAA world sit up, take note, and tip its hat. It was a victory in itself. And that’s before you even consider the catchment areas of the competing clubs.
Monaleen, in a hurling-mad county, apparently draws upon a population of roughly 18,000 from one of the largest and fastest-growing urban suburbs in Ireland. There are about 300 people in Tooreen — not that you’d have known the disparity by the noise pouring out of the Hogan Stand. The village, its offspring and diaspora travelled in numbers as well as expectation.
The expectation, as it turned out, was well founded.
In fact, if you had told the Tooreen management beforehand that all six of their forwards would score more than once from play, and that only four Monaleen forwards would manage the same, they’d have probably bitten your hand off. And when wing-back David Kenny reserved the All-Ireland final to land his first point of the championship, rounding off a wonderfully creative team move with a booming score from inside his own half after 24 minutes, the fact this was already Tooreen’s eighth score of the game compared to Monaleen’s fourth, had you seriously considering the prospect of an upset. The reasons — and very fine margins — why it didn’t happen thereafter have been well detailed elsewhere by this newspaper, like how two Monaleen shots hit but fell between the posts and two Tooreen shots hit the posts and came to nothing. That’s hurling.
But dare we say, it was whispered closer to Tooreen’s base camp than you may think that last Saturday’s defeat could, in the greater scheme of things, actually be for the greater good. That’s not for one moment to suggest that every fibre of every person connected to Tooreen’s challenge for All-Ireland glory didn’t yearn for the victory and to see Shane Boland raise the trophy in the Hogan Stand, only that some were still able to extract positives from a sad situation. It was said that where one or two of the team’s older heads may have contemplated retiring as All-Ireland champions, now they may feel compelled or even obliged to devote another year in pursuit of the big prize, thereby furthering the progression of Tooreen — a progression that could, in a strange sense, have been jeopardised by them winning. How so, you may well ask? 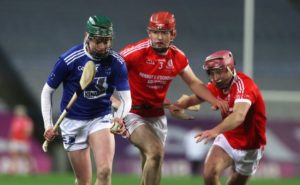 If the GAA had a plan in place for what happened in the event of a Tooreen win, no one seems sure what it was – or is, if it’s the case that Tooreen do like Ballygiblin in the junior final last Saturday and return next year to finally take the crown. Manager Ray Larkin has already said that will be their ambition. The likelihood is that Tooreen would then be thrust into a situation whereby after a subsequent defence of their Mayo senior hurling title, they would, as in days of old, have to take on the senior champions of Galway in a one-off game.
That was an arrangement which never did much for the development of Mayo hurling, whereas it has been the regular competitive matches against teams of similar means, in that space just below the very top senior club teams in the country, particularly against the champions of London and intermediate champions of Galway, that has improved Tooreen (winners, most times very narrowly, in 10 of their last 11 games in the Connacht intermediate championship) to a standard that now has observers engaging in a conversation about whether it behoves the GAA to consider somehow accommodating the club in Galway hurling’s upper tiers.
Could that be achieved while retaining the integrity of the Galway and Mayo championships? How else to ensure Tooreen’s continued development? How to utilise Tooreen as the rising tide that lifts all Mayo boats?
All questions for which answers would need to be carefully teased out. You could even say it probably isn’t a fair situation that the Galway intermediate champions now find themselves having to play a team that is repeatedly winning the Connacht championship without risk of promotion, whereas if the Galway team were to win, that’s the last they’d see of Connacht until crowned Galway senior champions or relegated from Galway’s senior ranks and crowned county intermediate champions again, as happened to Monaleen when dropping out of Limerick’s top tier in 2021 only to make their return at the first time of asking.

Tooreen, in more ways than one, have the GAA world talking.