Is this amazing Lee Keegan statistic also Mayo’s most damning?

By Anthony Hennigan
The famous quote by the record-breaking American Football coach Bear Bryant that “defense wins championships” has spawned countless alliterations over the years. Depending on the sport we’ve heard “Defences win you matches and the forwards decide by how much”, “Goals win you games but defences win you titles”, and “Forwards win matches and backs decide by how much.”
The Kerry footballers, just last year, were even described as “perfect proof” of Bear Bryant’s theory because of their quite miserly concessions along the road to becoming All-Ireland champions. Funny that, when you consider it wasn’t one of their defenders but the assassin David Clifford who was their hands-down winner of the GAA Footballer of the Year.
If you want “perfect proof” that Bryant’s theory is flawed, at least when it comes to Gaelic football, you need look no further than Mayo.
From the time the team that James Horan built truly burst on the scene to reach – and LOSE – four All-Ireland senior football finals between 2012 and 2017, seven Mayo defenders won sixteen All-Stars. That’s three more All-Stars than were awarded to defenders on a Dublin team that also reached – and WON – four All-Ireland finals during the same period.
So, was it Dublin’s defence who really won those four championships – or their attack perhaps, seven of whom shared thirteen All-Stars across those six seasons compared to five All-Stars for Mayo’s forwards? 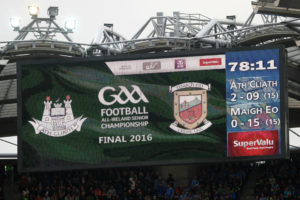 The scoreboard at the conclusion of the 2016 All-Ireland SFC final between Mayo and Dublin. Picture: INPHO/Donall Farmer

Even extending the period examined, and despite appearing in – and winning – seven All-Ireland finals between 2012 and 2022, Dublin defenders still garnered only five more (24 versus 19) All-Stars than Mayo defenders who appeared in – and lost – six All-Ireland finals across the same eleven seasons. Yet Dublin’s forwards won more than three times as many All-Stars (23 versus 7) as their Mayo counterparts during that period.
Forget what Bryant said, when it comes to Gaelic football it’s forwards who win championships and that is the central reason behind Mayo’s tale of woe. With the possible exception of Tyrone in 2021 (Don’t mention the war!), we simply haven’t had the firepower to rival the counties that have managed to raise Sam Maguire at our expense. Yes, people will point to Cillian O’Connor being the top-scoring player in championship history and that Andy Moran was named Footballer of the Year and that Diarmuid O’Connor, like brother Cillian, was twice named Young Footballer of the Year and that Kevin McLoughlin has probably been one of the country’s most underrated forwards, and… and … and…
But do you know the thing that links those four, and Aidan O’Shea, who won two of his three All-Stars as a forward, and Jason Doherty, and every other Mayo player for that matter, is that in the ten championship matches that Mayo and arch-rivals Dublin played between 2012 and 2022, Lee Keegan scored more from play that any of them, all the while carrying out his defensive duties to a standard that saw him become Mayo’s all-time All-Star winner.
Keegan played all ten of those games against Dublin – five finals and five semi-finals – and struck 3-5 (fourteen points in a different currency).
In contrast, Cillian O’Connor scored 0-11 from play and while you could point to the fact O’Connor missed the tenth game (2021 semi-final) due to injury, Keegan, it’s worth remembering, missed the entire second-half of the replayed 2016 final having already struck a goal in that game. There’s every possibility he’d have added to his tally.
More damning is the single point that Aidan O’Shea managed to score despite also playing all ten of those games against the Dubs, the times he lined out as a midfielder (as opposed to centre-forward or full-forward) not counting as much of an excuse given Keegan’s positioning at either wing-back or corner-back in every game.
Kevin McLoughlin also featured in all ten games but even his contribution of seven points from play is half what was scored by Keegan while Jason Doherty rowed in with just four points in the first seven of those Mayo-Dublin encounters from ’12 to ’17 before missing the three games since due to injury. Put another way, the combined score of O’Shea, McLoughlin and Doherty (0-12) in their combined 27 championship appearances against Dublin still falls two points short of what Lee Keegan, a defender, contributed alone to the cause. Diarmuid O’Connor has scored 0-4 in his eight appearances since 2015. 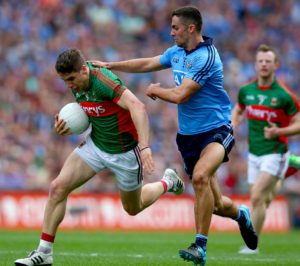 The man who came closest to besting Lee Keegan’s scoring record against Dublin was Andy Moran who falls one point short of his Mayo teammate. Injured in 2012 and retired before the 2020 and 2021 instalments of the rivalry, Moran scored 1-10 in seven games and were it not for the fact he started the ’15 and ’19 semi-finals on the bench, it’s possible the Ballaghaderreen corner-forward would have surpassed Keegan’s tally. But that’s only as it should be.
But forget about just the monologue that was Mayo versus Dublin; Mayo’s overall attacking issues were highlighted by this writer six years ago (Western People, March 13, 2017) when pointing out that Lee Keegan even then had a championship scoring average that was higher than Aidan O’Shea and Kevin McLoughlin, who had debuted several years before him, an average that was practically identical to Jason Doherty and which at that stage was only 0.26 points less per championship game than Andy Moran who, like Doherty and McLoughlin, had the advantage of kicking frees to bolster their stats.
At that point, Keegan had scored 4-28 in 33 championship appearances in the five seasons from 2012 to ’16 and in a remarkable display of consistency, added a further 3-20 (only eleven points less) in his next 34 championship appearances between 2017 and ’22 despite having reverted for much of that time to the full-back line.
Defence never won a championship for Mayo – but one defender very nearly did.
They broke the mould when they made Lee Keegan.