First trophy of the McStay era for Mayo

Kevin McStay picked up his first piece of silverware as Mayo manager with his team running out four points winners over Roscommon in Friday night’s FBD Connacht Senior League final at the Connacht GAA Air Dome.
The indoor Astroturf venue has become noted for the high-scoring nature of most of its games, however, at 0-13 to 0-9 this was a match that failed to raise the pulses of the attendance. Roscommon in particular were guilty of some very poor shooting, kicking a dozen wides and several shorts, and they failed to raise a flag at all until the 21st minute at which stage Mayo had moved into a three points lead courtesy of points by Fionn McDonagh, Ryan O’Donoghue and Diarmuid O’Connor, the latter pair from frees. 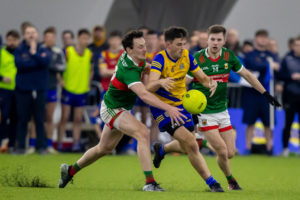 Mayo, it should be said, failed to set the world ablaze in an attacking sense either, and by full-time the starting six defenders had scored more from play than the starting six forwards (three points to two).
A couple more scores from placed balls by O’Donoghue and a point in reply on the stroke of half-time by Diarmuid Murtagh meant Mayo led 0-5 to 0-2 at the turnaround and McStay’s men nursed that three points advantage for all of the third quarter, with points by Conor McStay, Ryan O’Donoghue, a free, and captain for the night, Stephen Coen, negated by Murtagh, Keith Doyle and Conor Cox, a half-time substitute.
Life may have been more comfortable for the Green and Red had Bob Tuohy dispatched a 46th minute goal chance, having also had an effort saved by Roscommon goalkeeper Conor Carroll in the first-half, but even playing most of the last ten minutes with fourteen men following full-back Rory Brickenden’s dismissal on the second booking was of little hindrance.
Mayo introduced old warriors Aidan O’Shea and Cillian O’Connor for the final quarter, with two points from the latter coupled with singles by Enda Hession and Jordan Flynn helping to steer their side to a first FBD Connacht Senior League crown since 2012.