He might be regarded as one of the greatest forwards of the modern era but Diarmuid Connolly has no problem admitting that when it came to being marked by Mayo footballer Lee Keegan, it was Connolly himself who oft times ended up doing the marking.

The legendary Dublin footballer has praised Keegan’s influence after the Mayo man announced his retirement from inter-county football ahead of the 2023 season.

The pair were often found in close quarters during the fierce rivalry between the two counties in the 2010s and five-time All-Star Keegan recently singled out Connolly as his toughest opponent having found himself on the losing side in four All-Ireland finals at the hands of Dublin between 2013 and 2020. 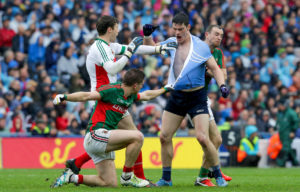 Now Connolly has returned the compliment, saying his old foe will be a significant loss for the Mayo side, especially since he believes Lee Keegan was still the Green and Red’s standout player in 2022.

“It was a bit of a shock to me to see him hang up the boots so early to be honest. He’s a guy I really admire; when he played at number five he was really hard to stop, he took your focus because he liked going forward a bit and getting on the scoreboard,” Diarmuid Connolly has told BoyleSports.

“He caught me on the hop in the All-Ireland Final replay in 2016 when he got a goal off the run of play and that can knock you for six. We were lucky to win that game; they didn’t get over the line against us, so it may be disappointing for him never to get a Celtic Cross medal.

“He may have been sent to man-mark me but sometimes I ended up doing the marking. A lot of sides went defensive against us but to be fair to Mayo they went toe-to-toe and that’s why the games were so exciting and often so close.

“I don’t believe I was a better player than Lee Keegan, I just played a different game. He was a top player for the Mayo side and they’ll miss him this season.”