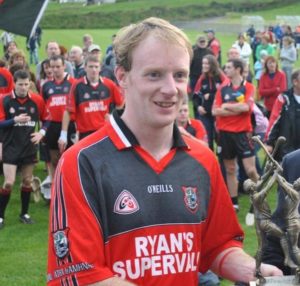 The late Pierce Higgins from Ballyhaunis who has passed away aged 45.

The death has taken place earlier today of former Mayo and Ballyhaunis hurler Pierce Higgins. He was aged 45.

Married to Clare and father of Erin and Ellie, Pierce is the son of Pete and Kay Higgins and brother of Mayo GAA star Keith Higgins.

Pierce was diagnosed with Motor Neurone Disease in 2017 after which he showed huge determination to still tog out in that year’s Mayo SFC final against Tooreen. It was a determination that was to remain with Pierce throughout his near six-year battle with MND. 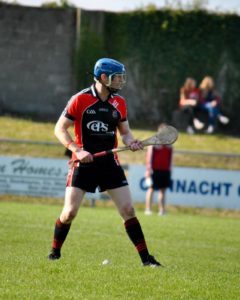 As a player, Pierce Higgins won an incredible fourteen county senior hurling medals, the first two with Tooreen before he and dad Pete helped Ballyhaunis form their own senior hurling club in 1997. Pierce made his Mayo senior debut that same year and went on to wear the Green and Red for fourteen consecutive years. Together with Keith, the brothers’ biggest achievement arguably came when both featured on the Mayo team that reached the 2008 Christy Ring Cup semi-final only for a last-minute goal by Carlow to deny them a famous victory.

In offering their heartfelt condolences to Pierce Higgins’ family today, Ballyhaunis GAA Club said that: “Despite the daunting challenges that he faced, Pierce’s unbending stoicism and radiant positivity have been an inspiration to all and especially to those closest to him. Ar dheis Dé go raibh a anam dílis.”

Pierce Higgins will repose at Donnellan’s Funeral Home, Clare Street, Ballyhaunis, on Sunday evening from 3pm to 6pm. Funeral Mass is on Monday morning at 11am in St Patrick’s Church, Ballyhaunis. House is strictly private.