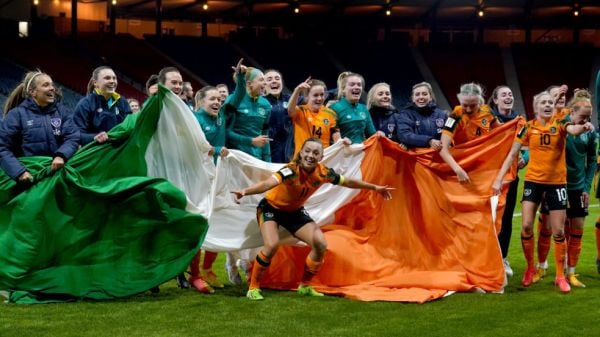 Uefa has fined the Football Association of Ireland (FAI) after members of the national senior women’s team sang a pro-IRA song following their World Cup play-off win over Scotland.

A video circulated online of the Republic of Ireland players singing the song, and Uefa confirmed on October 13th it was investigating the incident for potential inappropriate behaviour.

On Thursday, European football’s governing body said its Control, Ethics and Disciplinary Body (CEDB) fined the FAI €20,000 over the incident, describing it as “a violation of the basic rules of decent conduct”.

The FAI and Ireland manager Vera Pauw apologised at the time over the incident.

Pauw said: “It’s quite right that it’s taken some shine off because this goes deep into the history of Ireland.

“It doesn’t matter if the players meant anything or not – because they didn’t mean anything with it – it’s a celebration that occurs, but that doesn’t mean that they (shouldn’t) realise what they’re doing. If it’s in a private room, it should not happen either.

“We’ve hurt people and we are very, very deeply sorry for that.”