Volunteers light up Ballina for Christmas

A massive, coordinated volunteer effort has ensured that Ballina’s main thoroughfare is lit up for the festive season.

A group of 50 volunteers, including members of the Ballina Community Clean-Up group and local electricians, were mobilised by Martin Devaney from the Clean-Up group last week. There was a tremendous buzz as they worked for five nights to decorate the town centre.

Two weeks ago, local councillors received an email from the head of Ballina Municipal District, Declan Turnbull, informing them that the town would have limited lighting for Christmas this year despite Mayo Co Council making a provision of €36,000 for Christmas lights earlier in the year.

The email stated that the erecting of the lights was tendered in October but the preferred tenderer, as well as a second contractor, were unable to take on the work and the municipal district was now reliant on a number of volunteers to do the work.

“These volunteers are to be praised and thanked and given credit and support — without them, we would have no lights at all,” it read.

Cathaoirleach of the municipal district, Cllr Mark Duffy said local electricians also had to step in last year to complete the job.

“A different approach is needed going forward for next year and the following years. A multi-annual programme for Christmas lights needs to be tendered out to an electrical contractor,” he said.

In addition to the lights, colourful signage was erected at the six main roads entering Ballina by the Community Clean-Up group proclaiming Ballina as ‘Santa’s Favourite Town.’

There was also an installation of Christmas lights on Cathedral Road and Barrett Street by a team of volunteers from the local cumann of Fianna Fail which was arranged by Minister for State Dara Calleary.

“I want to thank my group of volunteers for their time, expertise and commitment to the plan,” he said. “I also wish to compliment and thank the efforts of all the volunteers involved in the erection of Ballina’s lights this year. The town looks fantastic.

“Without this collaboration of local voluntary groups, there would have been no lights at all — the efforts made by all epitomise all that is great about Ballina.”

The big switch-on of the lights took place last Sunday. Traditionally, the lights are switched on by the Cathaoirleach of the Municipal District, but this year, Cllr Duffy passed the baton on to children from war-torn Ukraine who are staying in a local hotel.

Christmas is well and truly underway in Ballina with free parking now in effect in Council-owned car parks from 2pm to 6.30pm daily from now until Saturday, December 31. 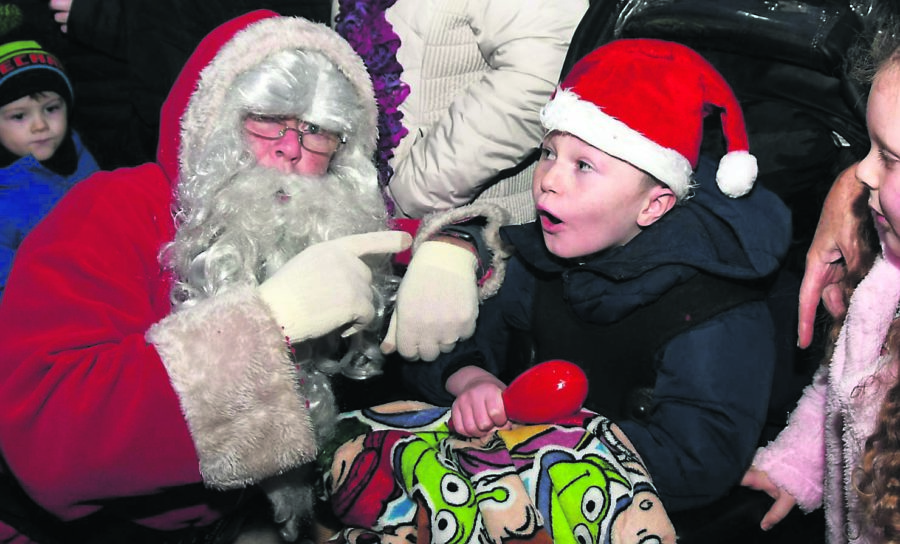 Sonny Moyles from Ballina meets Santa at the turning on of the Christmas Lights in Ballina last Sunday. Picture: John O’Grady