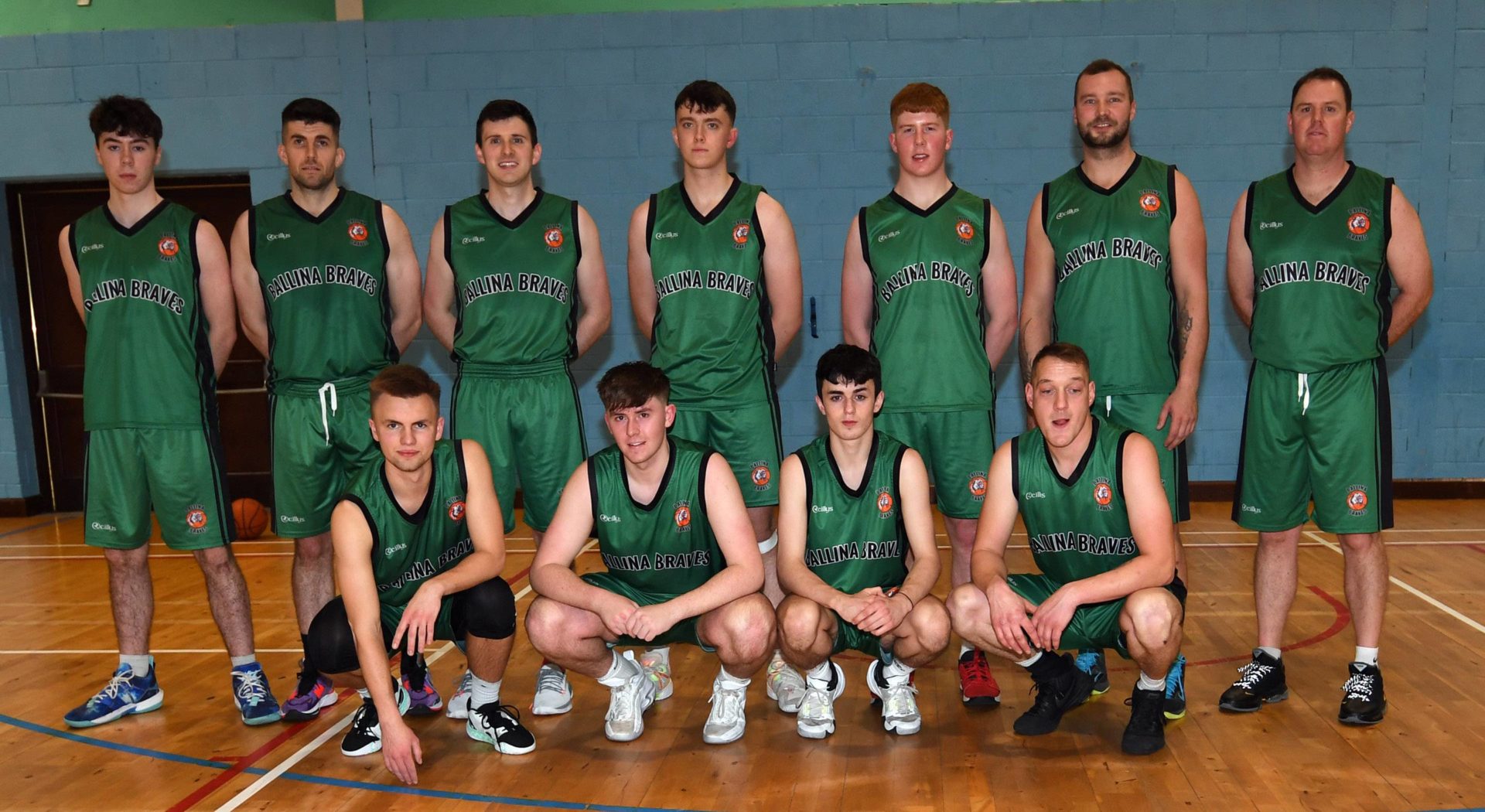 Senior basketball has returned to Ballina after an absence of over a decade this autumn, with the Ballina Braves senior men’s team having joined the LLR Regional League.

The Braves had their second home game of the season, and their fourth overall, at the Ballina Sports Centre last Saturday evening and they continued their 100 percent start to the season with a commanding 17-point victory over their guests from Athlone BC, on a final score of 61 points to 44.

The Braves had already secured road wins over Castlerea Cavaliers and Donegal Town, and a home win over Longford Phoenix, but they were braced for their toughest test to date on Saturday, welcoming an Athlone side who had won four from four to start the season and sat joint-top of the league standings heading into this Round 5 encounter.

The Braves’ task was further complicated when news broke in the lead-in to the game that Ronan McGarrity, scorer of 28 points in the Round 3 win over Donegal, was to miss the game with illness. McGarrity is one of a number of veterans of the glory days of Ballina basketball in the 1990s and early 2000s lending their talent and experience to this up-and-coming Braves teams, but others of his vintage, like Paul Barrett, Peter Papic and Stephen Popplewell, all played on Saturday night as the home side proved far too strong for their visitors.

The Braves’ scoring on the night was led by Martynas Pankunas, who dropped three excellent three-pointers as part of his 15-point haul, and Ronan O’Malley, the Ardnaree footballer who was probably the home side’s most impactful player, particularly in a first half in which he dominated Athlone at both ends of the floor.

Barrett used all his guile and nous to control the pace and rhythm of the Braves’ offence while on the floor while Papic and Popplewell were key figures in a physically dominant Ballina defence.

The Braves, under the stewardship of coach Derek Cunningham, are also bringing through some promising young players over the course of this campaign.

Luke Feeney, who played at midfield for the Mayo minors earlier this year, dropped four points on his debut senior appearance on Saturday night while the likes of Mark Cunningham, Kyle Armstrong and Eoin Noone also turned in impressive performances.

There was little to separate the two teams in an evenly-pitched opening quarter. O’Malley started brightly for the home side and had 10 points on the board inside the first quarter, showing real intent to drive hard at the Athlone rim. The Braves’ shooting took some time to click though, and Athlone were able to keep pace with their hosts early on through nice buckets from Stephen Mannion, John Kennedy and Mel McGerr, the wily point-guard who was probably Athlone’s best performer on the night. Ballina led 14-12 at the end of the first ten-minute quarter. 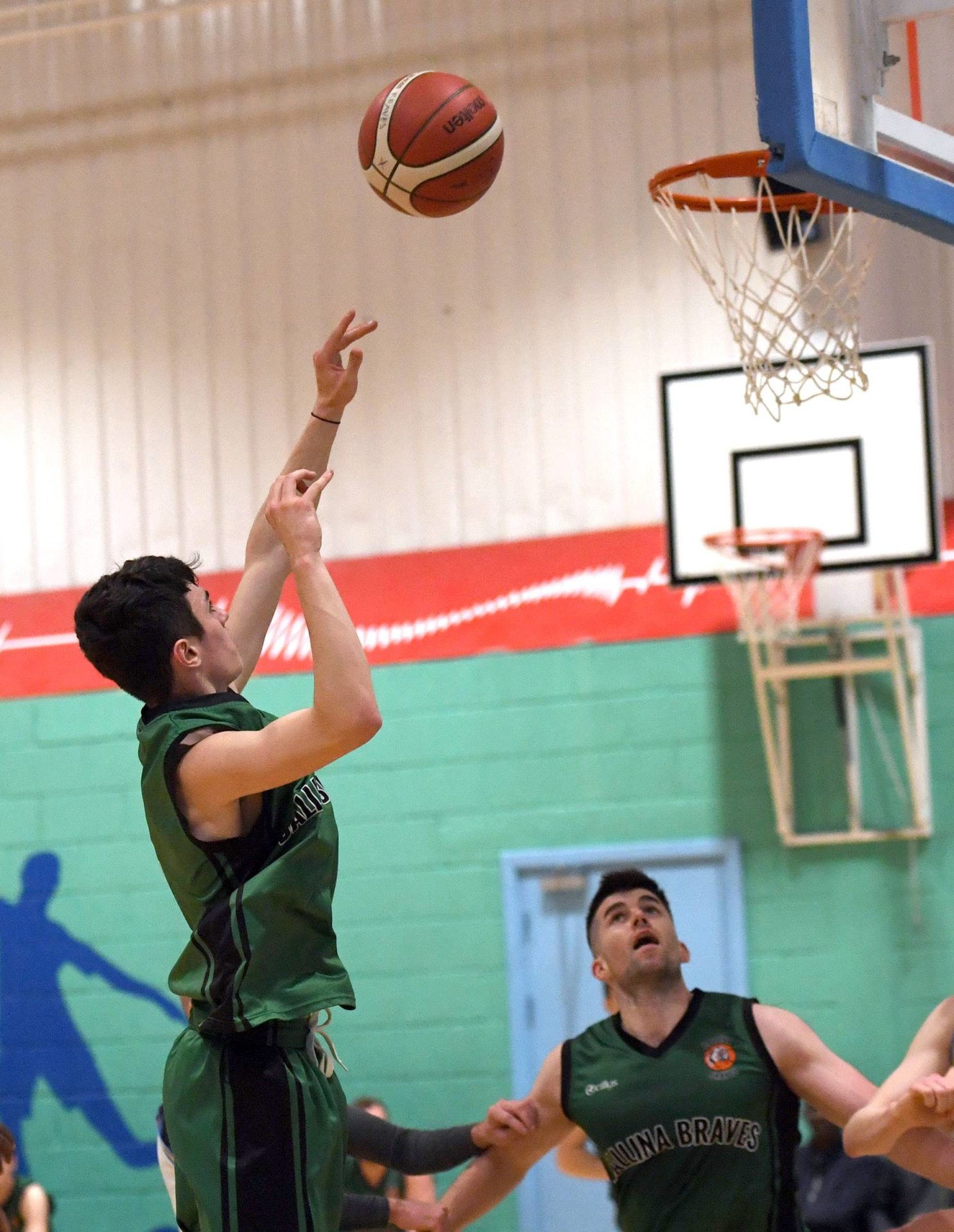 Mark Cunningham scores for the Ballina Braves during their impressive win over Athlone on Saturday.

But the hosts moved up through the gears in a second quarter in which they held Athlone to a total of just three points. Martynas began to get more involved and he dropped a couple of lovely baskets from the floor, with Rory Upton adding real energy and dynamism moving up the court. Cunningham came in off the bench to drop a beautiful three-pointer late in the quarter to help put the Braves in a commanding position at half-time, leading 23-15.

The Braves continued to have the better of the exchanges in the third as Athlone struggled to create clear looks at the basket. Noureddine Eshaji was an all-action, high-flying presence for Athlone but with the likes of Papic and Popplewell blocking up the lanes, he found it difficult to force his way through.

At the other end, Martynas was sparkling into life. The Lithuanian nailed three three-pointers in the space of five minutes in the third quarter to help push the braves into an unassailable lead while Papic, Barrett and the newly-introduced Feeney also found scores to leave a gaping 18-point gap between the sides at the end of three quarters, Ballina up 44-26.

With the game as good as won, Cunningham withdrew some of his more established names and gave the younger guns minutes in the fourth. Mark Cunningham, Feeney and the Armstrongs were all heavily involved, and despite the relative youth on the floor, the Braves still held their own.

Eshaji won a handful of fouls in the fourth to finish as Athlone’s top scorer with 10 points but the Braves still went score-for-score, with Upton landing a gorgeous three-pointer and Feeney, Kyle Armstrong and Jack Armstrong all getting buckets – the Braves finished with ten different scorers on the night, an impressive spread. 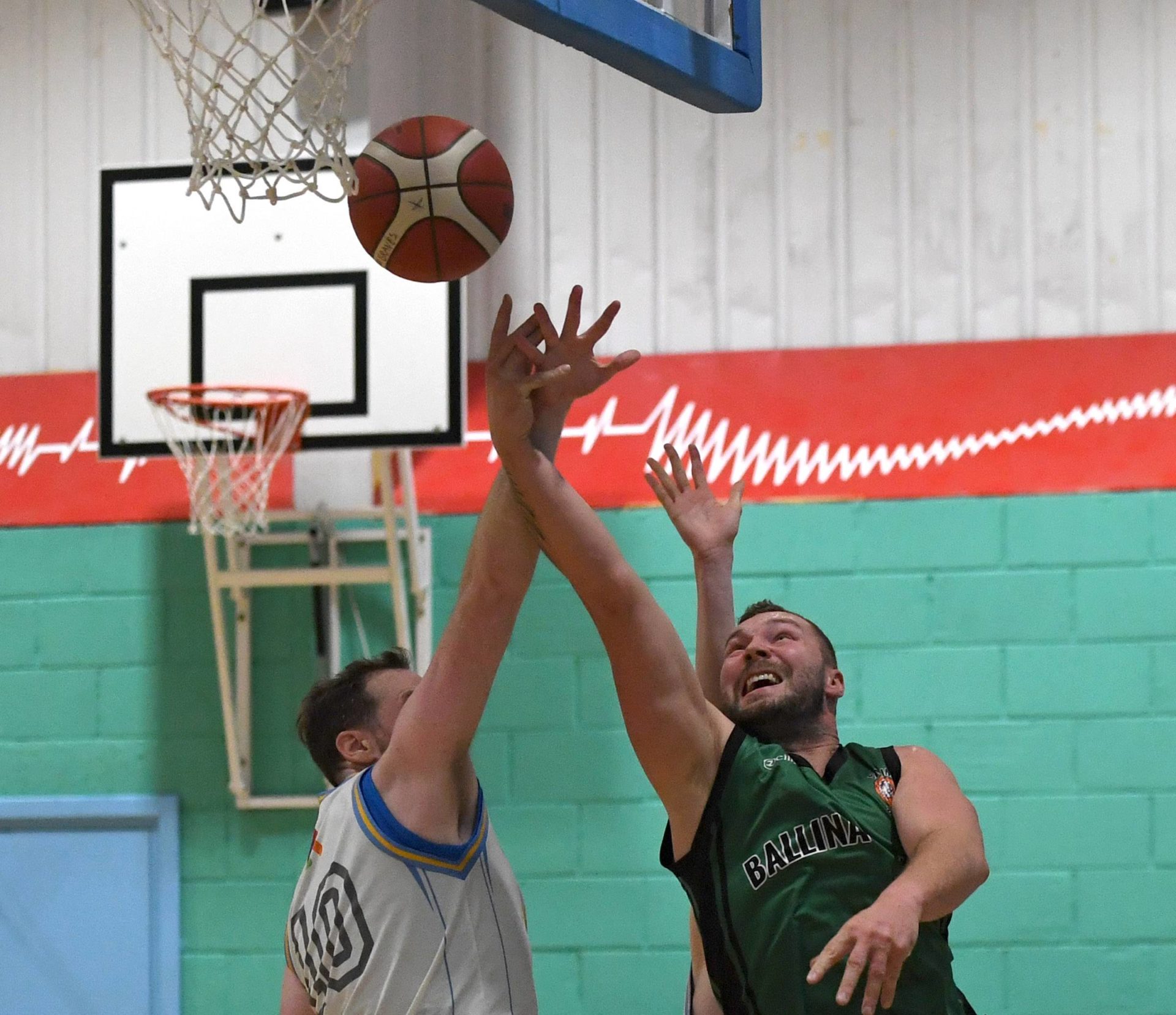 Ballina Braves’ Peter Papic and Tomas Glynn of Athlone compete for possession under the rim during the LLR Regional League clash between the sides on Saturday night.

The gap was all of 30 points at one stage mid-way through the fourth; Athlone restored some respectability in the closing minutes but the result was long-since decided here, a thoroughly deserved win for Ballina Braves and another step along their road in the development of this exciting new team.

The Braves’ next game is next Saturday night, December 10, at home to the Sligo All-Stars.