A major fundraising football match has been arranged to take place in the Air Dome at the Connacht GAA Centre of Excellence on Friday night, as a support for Mayo underage footballer Emma Langan. 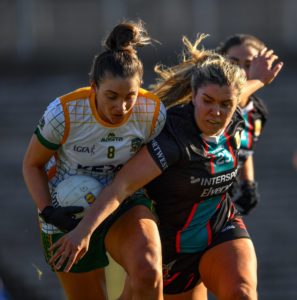 The St Brigid’s player was diagnosed with leukemia two months ago which prompted a huge response from right across North Mayo and beyond.

Emma, her four older sisters, Orla and triplets Ciara, Niamh and Siobhan, and their dad Seamus were rocked in 2019 when they lost their mother Yvonne to cancer and now significant fundraising efforts are underway to help the 14-year-old recover from her own cancer diagnosis.

Mayo senior ladies football manager Michael Moyles has been working hard for several weeks now to arrange that back-to-back LGFA All-Ireland senior football champions Meath will travel to the Bekan venue to take on his team in a senior football challenge this Friday night. The aim, however, is much more than simply to raise money, it’s to raise the spirits of Emma, to highlight just what the young footballer is going through and to increase awareness of leukemia.

“I was approached for some signed jerseys and to arrange a few messages of support from players, which we did, but I felt we could do something more, something for Emma and to highlight what she’s going through and which might give her some support,” Michael Moyles explained to the Western People.

And what better than to invite the best ladies football team in the country to play Emma Langan’s beloved Mayo in the spectacular setting of the Air Dome.

“Emma won’t be able to attend because she’s very prone to infection at the moment between her sessions of chemotherapy so we’ve arranged that Connacht LGFA will livestream the game, with a full production around it including commentary and messages of good luck,” added the manager who is urging as many people as possible to turn up on the night to show their support for the teenager who has also shone on the soccer pitches of Mayo playing for both Killala and the Mayo U16s.
Entry to the game between Mayo and Meath is absolutely free but bucket collections will take place. The Play4Emma GoFundMe page that was established in advance of last month’s charity match between the under-16 footballers of St Brigid’s and McHale Rovers in Moygownagh continues to do well.

Emma is in 3rd year at Gortnor Abbey, Crossmolina, but her Junior Cert studies will have to wait for the time being as she focuses on her rehabilitation. Her mum, Yvonne, was diagnosed with breast cancer a day before Emma’s first Holy Communion. She received treatment in Castlebar and Galway before getting the all-clear. However, when her cancer returned it had spread to her spine and liver, and her condition deteriorated before she passed away in 2019.

Emma continued to excel on the sports field and she played football for the St Brigid’s club before she went on to represent her county last year at under-14 level.