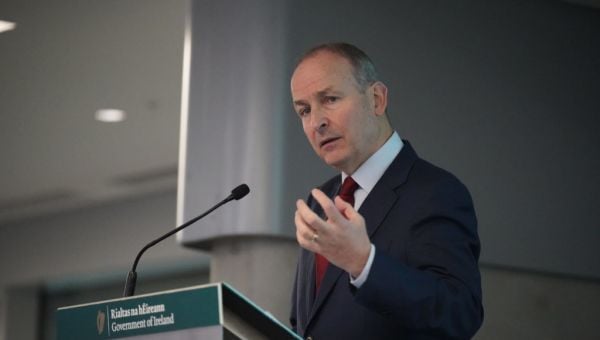 Taoiseach Micheál Martin has appealed for people to continue to “warmly” welcome Ukrainian refugees in their communities.

Mr Martin said there should be consultation with communities about accommodation but that the country is dealing with a “very significant” migration issue.

His comments come after residents in East Wall in Dublin held a protest on Saturday over housing for refugees in the area.

“There should be consultation,” Mr Martin said. “But that said we have a very significant issue in terms of migration, not just in Ireland but across Europe.

“First of all, we have an unprecedented number of people having to flee Ukraine because of the brutal war that Putin is raging. And Putin wants these type of issues to arise in societies.

“He is weaponising migration, Russia are bombing infrastructure … to, in many ways, provoke more people to leave Ukraine.”

Mr Martin told reporters at a housing construction site in Shankill, Co Dublin that many communities the “length and breadth” of the country are “doing exceptional work in welcoming Ukrainian families”.

“And I’ve witnessed this myself, travelling around the country (I) met Ukrainian communities, who have been very well and warmly received and that’s the spirit that I would urge people to continue with, notwithstanding the very significant challenges more generally,” the Taoiseach added.

Earlier on Monday Mr Martin attended the first National Community and Voluntary Civic Forum at the Aviva Stadium in Dublin.

Some 130 delegates attended the conference exploring how to strengthen public participating in policymaking.

Speaking at the event the Taoiseach said the community and voluntary sector are at times the first voice to identify emerging challenges “speaking loudly for those who cannot, while at other times working silently, almost unseen”.

“Our collective response to major challenges such as the Covid pandemic and the current war in Ukraine would have been so much poorer were it not for the invaluable role played by a wide range of community and voluntary organisations working locally and nationally,” Mr Martin added.

Minister for Rural and Community Development Heather Humphreys said the department is about putting communities first and giving people the opportunities to be part of policy decisions that affect them.

“It’s about encouraging that participation – in whatever form it takes,” she said.