Growing up on the pitches off the Newport Road, the young footballers of Westport GAA club were instilled with a rare psychological skill from the moment they first hopped an O’Neills football.

The club may not have boasted the same trophy-laden history of clubs in other large towns in the county, but that didn’t matter to those rearing the new breed of Westport footballers. They had a never-give-up attitude that would help the club, in time, to become a hothouse for some of the best footballers in the county. 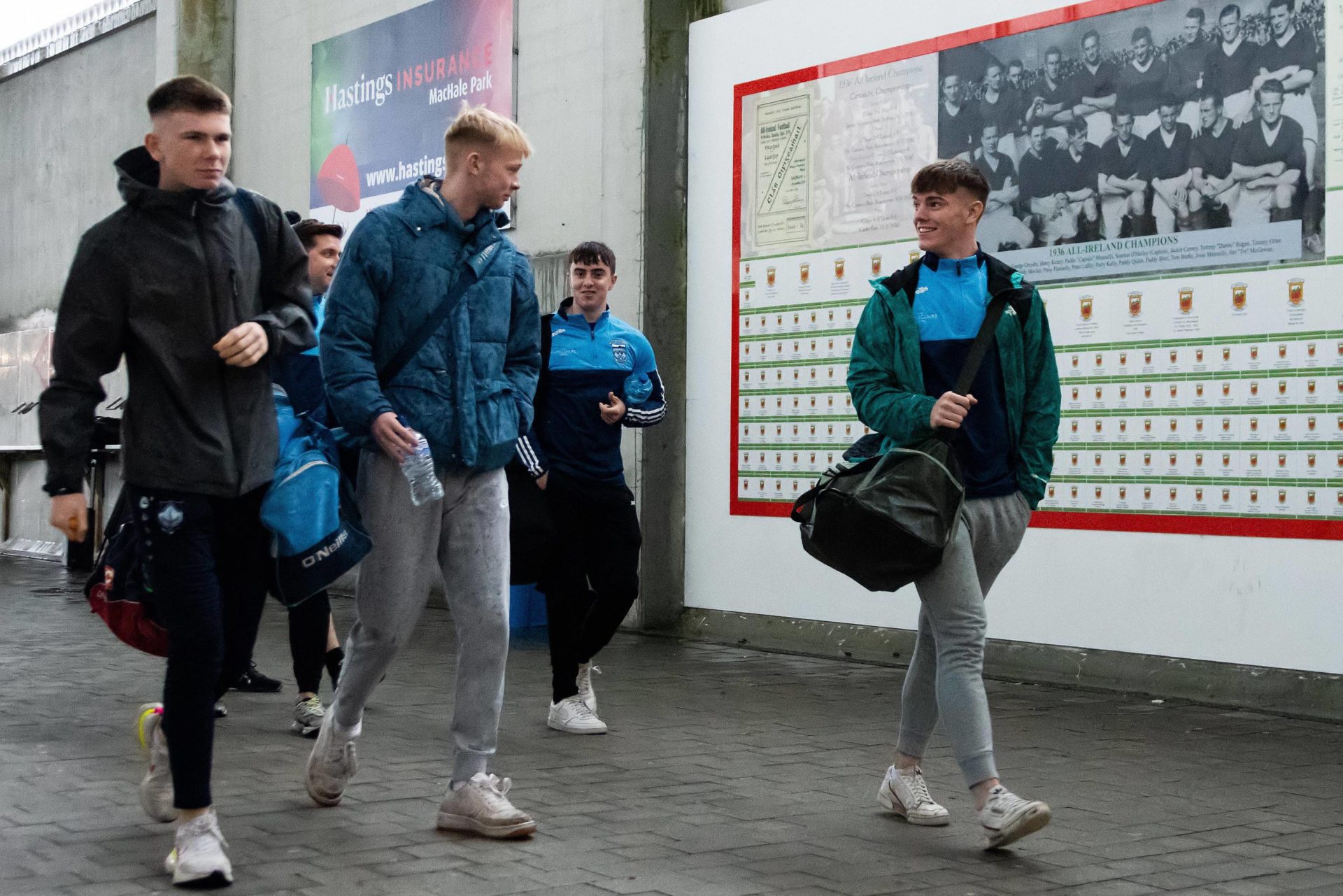 Some of the Westport players arrive at MacHale Park for their Connacht club football quarter-final clash with Moycullen, the first game for either club in the provincial senior championship. Picture: INPHO/Evan Logan

But the endurance with which the young players were inculcated didn’t hinder their ability to play with joie de vivre and, as the years rolled by, underage trophies piled into the club on a conveyor belt. It was only a matter of time before the club began to make hay at senior level. And once they did, that failure to resign in testing times never left them. The final minutes of all their games had become reminiscent of those final moments before the school bell rang on the school yard, young fellas desperately trying to get one last score or tackle in before a teacher appeared at the door.

In this year’s Mayo senior football championship quarter-final, a 13-man Westport outfit held off a late surge from Garrymore to record a two-point win. Against Castlebar Mitchels in the county semi-final, they required a last-gasp goal from Shane Scott in response to a Castlebar penalty to secure their spot in their first senior county final since the 1990s. Once again in the county final against a fancied Ballina Stephenites side, there was only a single score between the sides at the final whistle. The size of the mountain ahead has never daunted this collection of Westport men who considered winning titles growing up as customary as eating dinners.

But shortly after 2pm last Sunday afternoon, they finally faced their Everest. Seven points down to a Moycullen side at half-time in their first foray in the Connacht senior club football championship, Westport tossed away the playbook and went looking for a new answer.

There were problems all over the field for Martin Connolly and his management team to consider: Dessie Connelly was wreaking havoc in the forward line with a smorgasbord of impressive scores from every angle at MacHale Park’s Bacon Factory end, Moycullen’s defence had erected a defensive wall high up the pitch that Westport were struggling to penetrate and errors were creeping into all aspects of the Mayo champions’ game.

The side had started the game well. A couple of well-taken points were recorded before Brian McDermott rushed up the field to send his club motoring into the game by cannoning the ball high into the top corner of the net. But the Covies soon began running into potholes and Moycullen found their confidence.

The Mayo champions, needless to say, required a bright start to the second-half. Any more damage to the scoreboard against a side as impressive and confident as the Galway champions would’ve become fatal. With this in mind, they almost executed the start they needed when Killian Kilkelly quickly released a quick ball to Lee Keegan who was bursting towards the Moycullen goal from deep. He released a shot that was destined for the bottom corner of the Moycullen net. The ball was hit low and hard. It was practically unstoppable. But, exhibiting the reflexes of a cat pouncing on a mouse, Moycullen goalkeeper, Andrew Power, somehow managed to miraculously push the ball around the post.

A few minutes later Westport were given another gilt-edged opportunity when the ball found its way through a tightly-packed Moycullen defence and into the arms of Kilkelly who had been left unmarked only yards away from the goalmouth. The subsequent shot from the Westport forward was, however. driven wide.

Had those goals gone in, and had a few wayward frees drifted inside the uprights, Westport would’ve been in the ascendancy against a side who were missing a number of players through illness. Instead, Moycullen once again grew in confidence and Westport errors mounted.

One of those errors led to the Galway side’s second goal of the afternoon and what turned out to be the quenching of Westport’s rapidly fading hope. Following a surging run forward from Oisin McLaughlin, the field began to open up for the Westport joint-captain who spent just a fraction of a second too long considering his options. He was dispossessed and, a couple of seconds later, Westport defenders were scrambling to get organised as the ball was funnelled through the lines and palmed to the back of the net by Owen Gallagher. Another goal and an array of points would follow but Moycullen’s second goal of the game had already sealed the tie. Not even Westport’s reserves of resolve could overcome a nine-point deficit with only 10 minutes to play.

It wasn’t Westport’s finest day at the office, but there is hardly a 12-point difference between the best of what Mayo and Galway have to offer. It was nevertheless a learning experience for the team of youngsters, speckled with some grizzled veterans, who at every point of their young careers bounced back to even greater heights following losses. And all things considered, Moycullen may well be collecting the Andy Merrigan Cup before the end of the season. If they can overcome both a promising Westport squad and an illness that tore through their panel in the run-up to the game, there aren’t many clubs in the country that will feel wholly confident about playing a fully fit version of the Galway champions.

Westport’s immediate future, meanwhile, is still looking immensely bright. Ballina Stephenites lost their opening game of the Connacht club championship against Curry in 2003 before returning the following season to march through the county and province en route to winning the All-Ireland title in Croke Park on St Patrick’s Day. The formula has already been laid out for Westport if they want to emulate it.

They’ve already smashed through their glass ceiling by winning the club’s first county title in 2022. There’s much to suggest that this season has been nothing but an opening salvo to an era of domination with a bundle of more triumphs.