Sexton opens up on ageing, nutrition, and whether he will ever coach 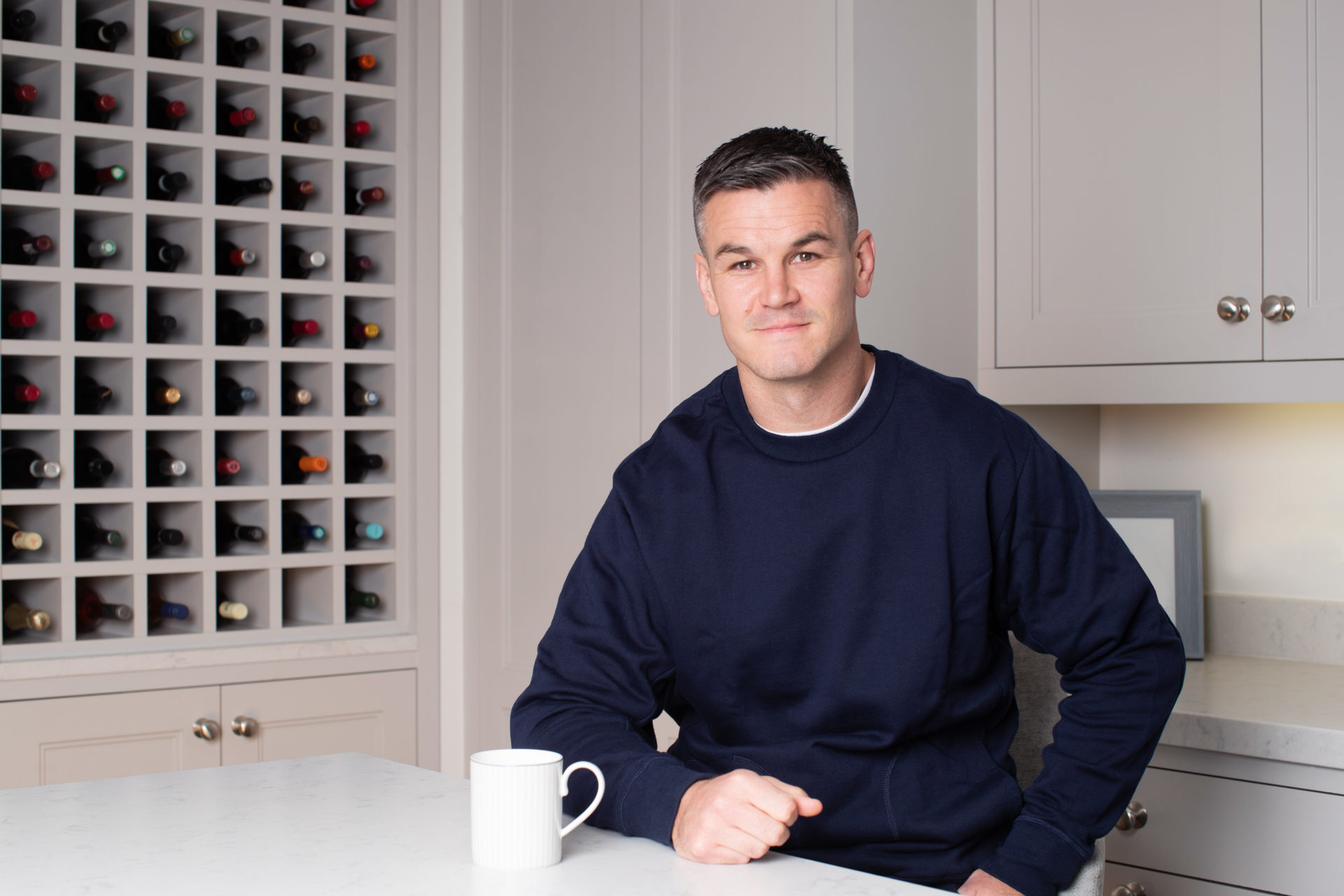 Off the pitch Johnny Sexton likes nothing better than spending time with his wife and kids in their Dublin home.

The Ireland and Leinster captain invites us into his Dublin home to talk frankly about family life, investing in himself, staying on top of his game, his World Cup hopes and passing the ball.

The 37-year-old captain of the Leinster and Ireland men’s rugby teams and two-time British and Irish Lion sits in his kitchen, having dropped the kids to school. 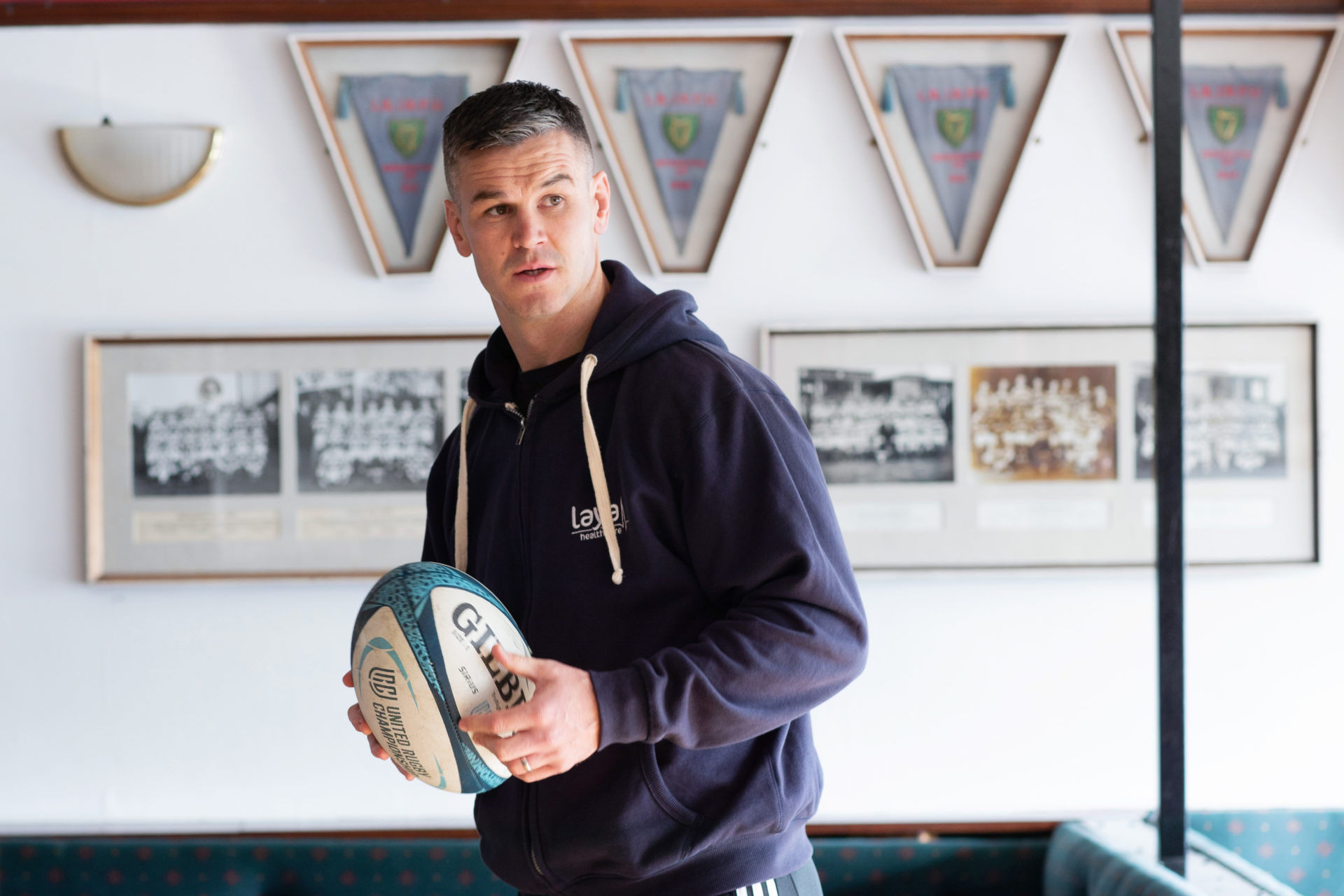 Their dog, a Vizsla, is away for the morning. Outside sits a barbecue on the patio and a kicking net in the garden, the latter installed to keep him ticking over during Covid lockdowns and now claimed by the kids as their goal.

The father of three has played 186 times for Leinster, 108 for Ireland. Rugby World Cup 2023 is on the horizon with another tilt at a fifth European Cup in sight and he is always looking for new ways to stay a beat ahead.

“We’ve always mapped out our ambition with the World Cup being, I suppose, the end point in this particular group’s journey. We need to keep trying to find areas to improve. We won the second test in New Zealand – we saw some areas that we could be way better in. We played the third test – we haven’t sat down and reviewed it yet, but I’ve watched it myself and there’s plenty of areas we can keep refining (had been improve but it’s been used several times).” 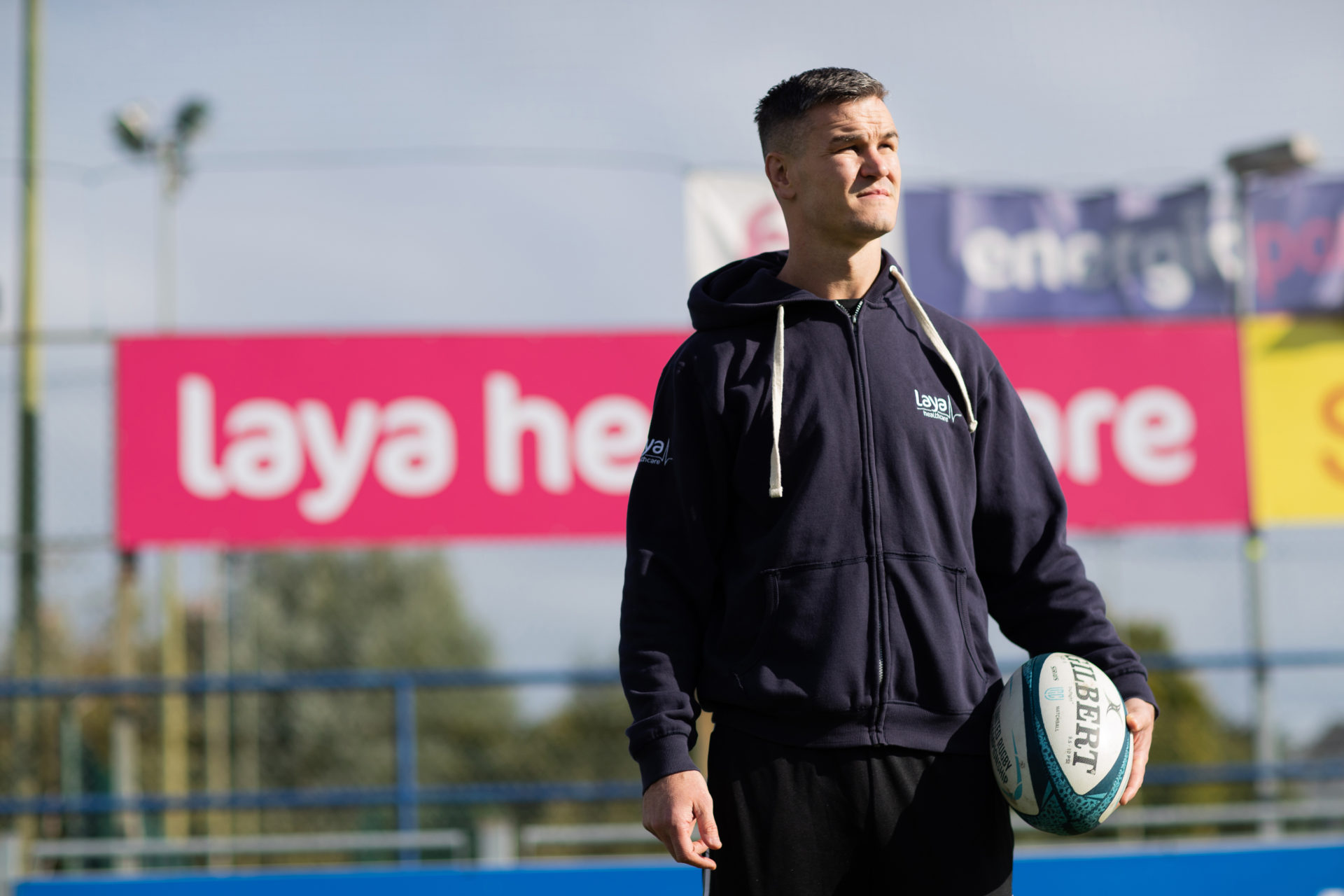 Johnny Sexton is a brand ambassador for Laya Healthcare, which sponsors Leinster Rugby.

A series win in New Zealand was no small thing, but it wasn’t all plain sailing in 2022. “A setback like the European Cup Final last year was – I think it was the hardest defeat I’ve ever had.” While Leinster’s loss to La Rochelle left them still chasing that fifth star, he enters this season with a powerful incentive: a home final at Dublin’s Aviva Stadium. “It could be up there with the greatest days in our career if we can make it happen.”

Fatherhood and how it changed his game

He has sixteen years of professional rugby behind him. Fatherhood has been a huge change to factor in.

“It’s been a huge transition but it also the benefit of being the older guy in the squad.” When teammate Luke McGrath recently had a baby and he tried to explain to him how your life changes in terms of your recovery, your game.

“You really need to change the way you do things and get enough sleep. I learned the hard way. I remember when we first had kids it was the first time, I started getting injured. It is a big challenge but it also the best thing you can be is be a dad.” 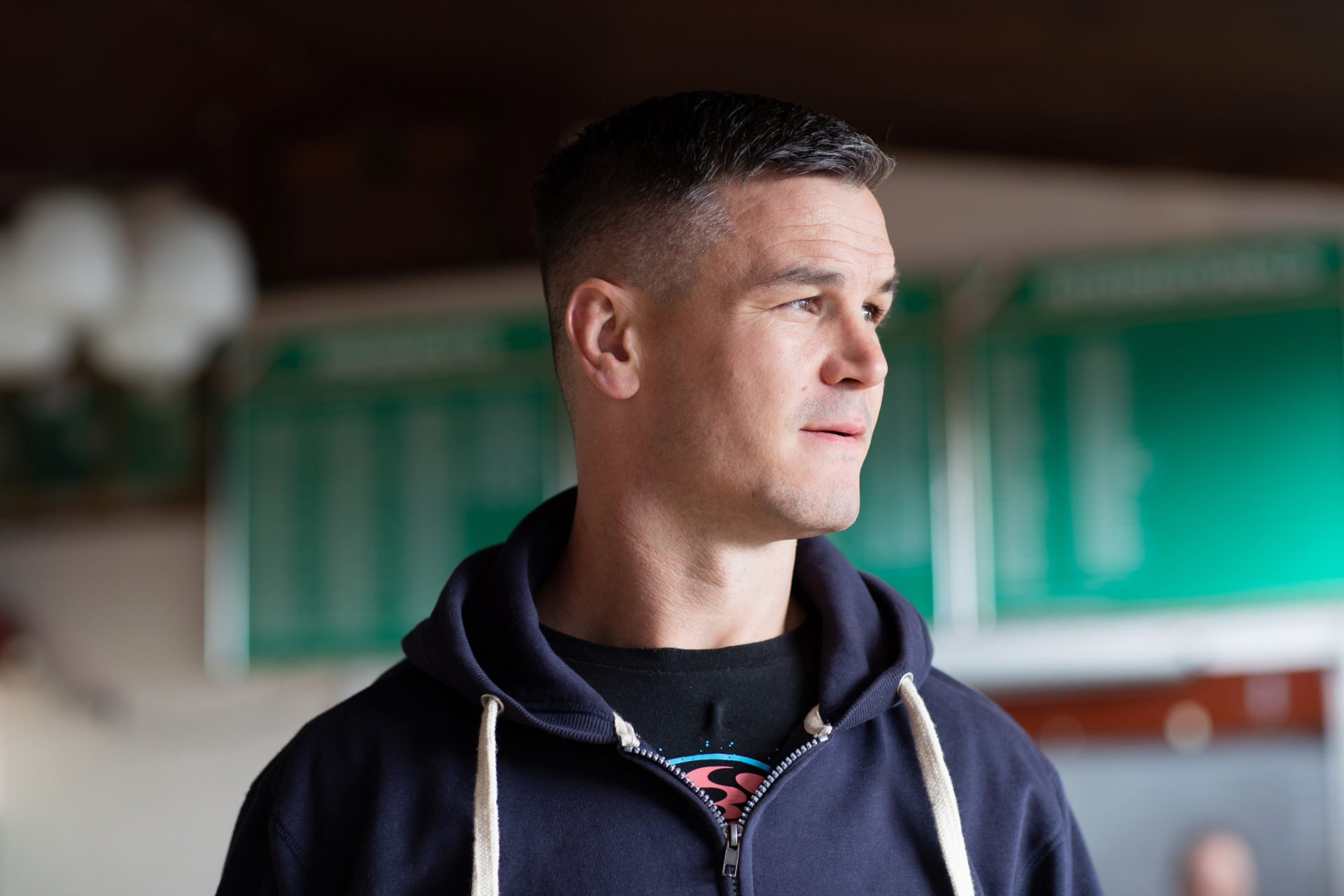 He credits much of his career longevity to wife Laura. “She does the majority of everything. She’s a huge part of me still playing and me getting to do the things I love over the years.”

Older than some of his teammates he has become somewhat of a father figure to some. “I genuinely don’t feel the age that I am, mentally as much as physically, thank god. I remember last year I was walking out to training with Jamie Osbourne, and I asked him if he had any brothers or sisters. And he said ‘yeah’. And I asked, ‘what age?’. At the time his brother was five and I had a son the same age.” It was a bit of an eye-opener.

Sexton at his second home, Bective Rugby Club where his father and uncle are both listed on the green captain and president boards to the rear.

A home from home

Fly half and place kicker, with over 2600 points scored for club and country, he practices his kicking at the Bective Rangers club, a short drive from his D6 house. The club and its grounds are, in effect, his second home and his spiritual heart. “That’s where I spent my childhood”, he explains nodding towards the low, grey-bricked Donnybrook clubhouse, wherein a team photo by the entrance displays his father and an uncle standing side by side along with his family GP and others that might as well be family. It’s a picture of the winners of the 1980 Metropolitan Cup, an annual competition played by senior and Leinster league clubs that’s been running for 100 years. 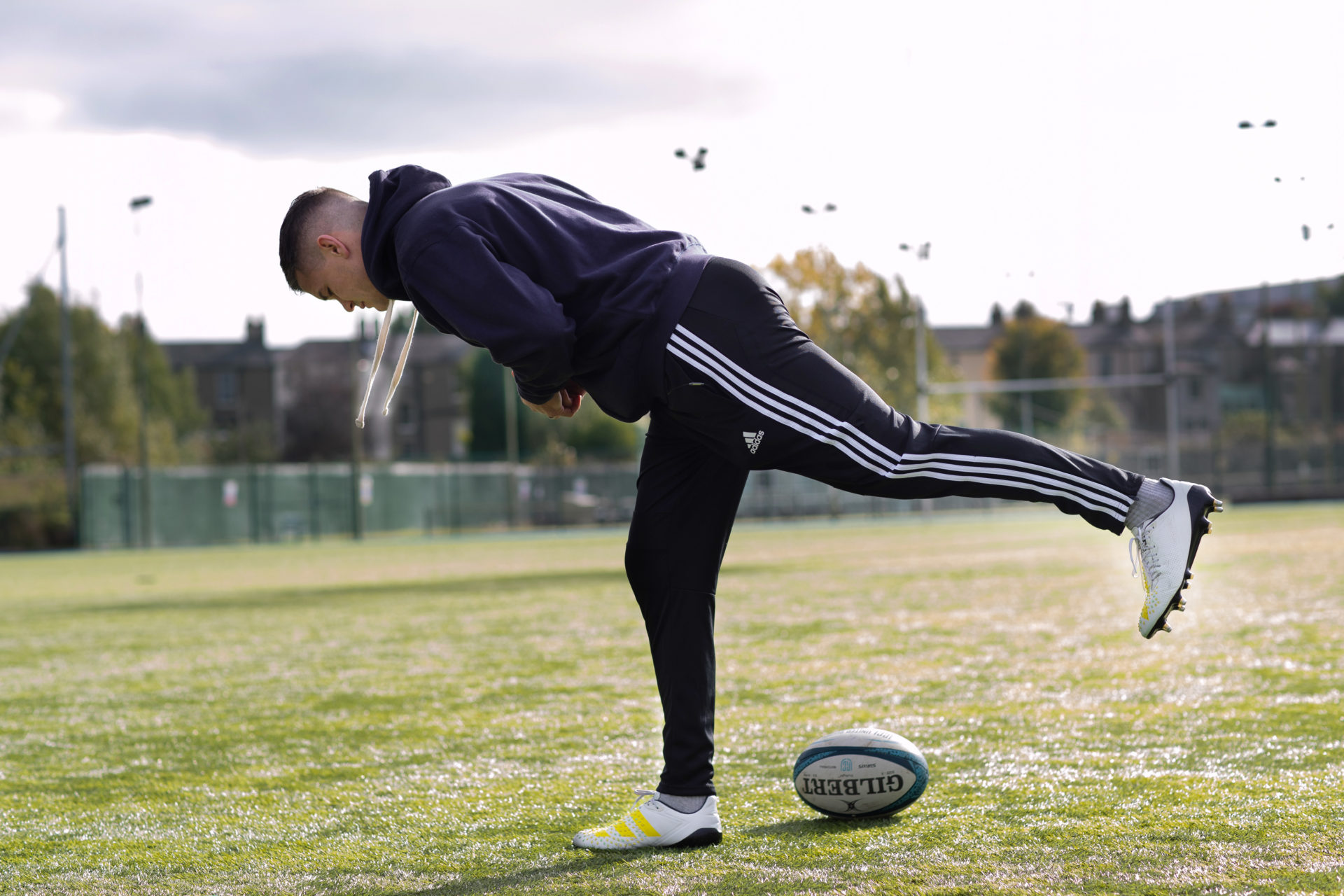 Johnny uses yoga as part of his recovery work, crediting it as part of the reason he is still playing at the age he is.

His family and home-life help him to switch off. “I come home after training and spend some time with the kids. If I’m early enough I’ll get to pick them up, or pick one up [from school], and then it’s just spending time with them and get them to bed. In the evening time I generally just watch sport, much to my wife’s dismay, and that’s really it.”

Home is also where he does a lot of extra recovery work. By his own admission it’s part of the reason he is still playing at the age he is. It can be extra physio work at home, a massage or stretching work.

It is in Johnny’s sitting room that he practices various types of yoga. “It touches on everything for me, and it’s great. It depends how I’m feeling: if I’m injured, or if I’ve had a tough game, or if it’s a recovery type session versus a real hard yoga session. Because they can be tough.”

One of the more strenuous practices he follows is ashtanga, where “you’re moving in and out of poses – you move real quick for most of the session”. And then there’s other times when he uses it mainly as “relaxation, and breathing, and mental headspace stuff”.

Looking after himself is part of his job. “I’ve always invested well in myself. I learned that from great professionals who have gone before me. Jamie Heaslip, for one, used to always explain to me how he literally took money aside at the start of every week and said, ‘I’m going to invest this into my body’.”

While an elite athlete the gym is something it took time for him to love. “At the start of my career I don’t think anyone would have pointed me out to be the best professional. I hated going to the gym. I hated doing all the extras, the fitness stuff and all that. But then the more you go through your career the more you see how it benefits you and now I absolutely love it.”

Nutritionally, how does he stay a beat ahead?

When at home he doesn’t need to weigh his food, he says, he just eats healthily. As an older athlete, he makes sure he stays on top. This includes taking the right supplements. These include collagen, fish oils and BCAA’s, a form of essential amino acids. In his kitchen is a large American-style refrigerator “that is full of jelly, low calorie jelly. that is just a different form (of collagen). The kids love it as well.”

These basics apply to everything, he says. “Sleep. Nutrition. Hydration. It’s all the boring stuff. There’s no magic bullet.” 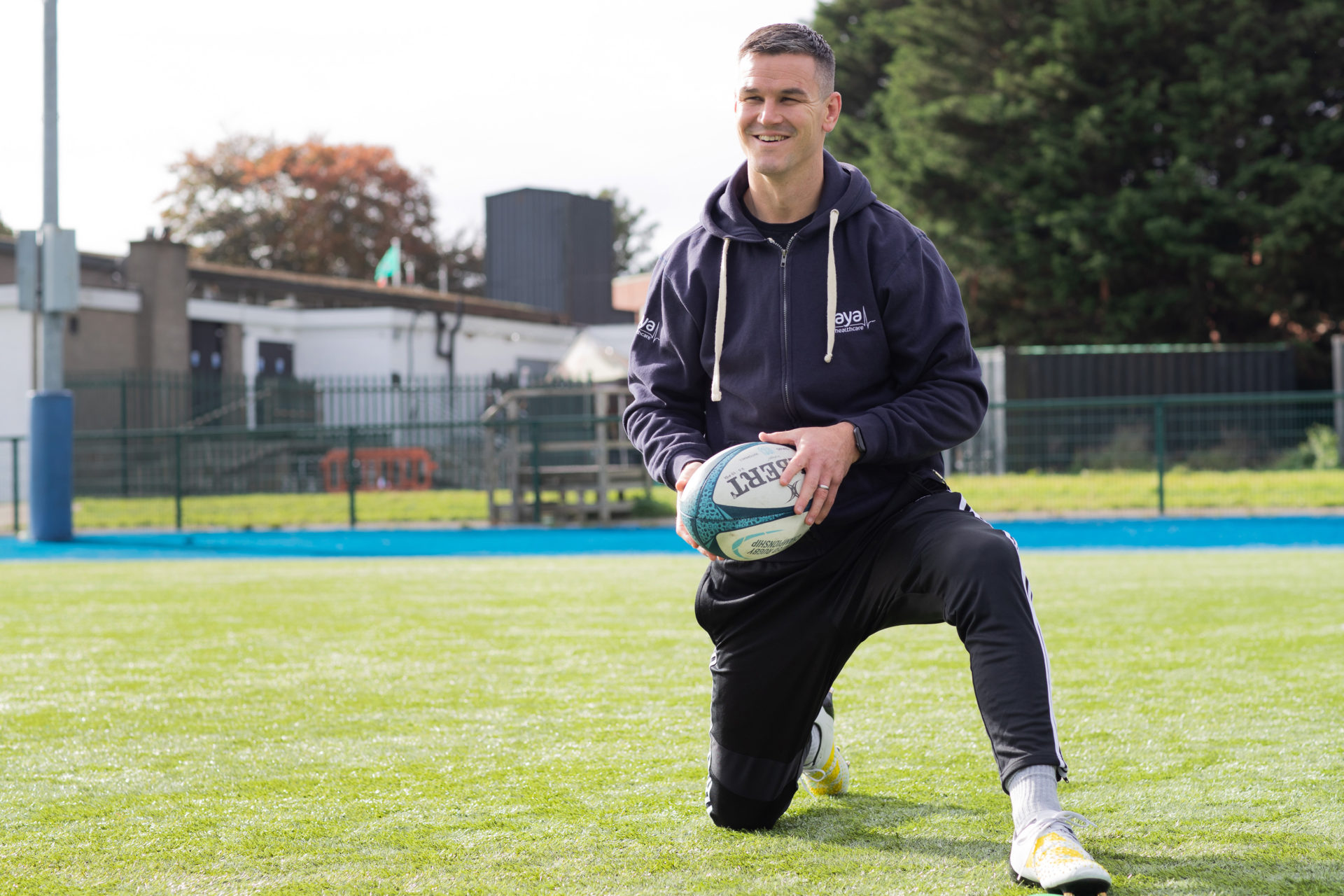 Looking after himself is part of his job. One of the more strenuous yoga practices he follows is ashtanga.

Being selfish as a player

In a recent documentary, Never Give In, Sir Alex Ferguson talked about the family sacrifices he made to be a great football manager. As a Manchester United fan it resonated, with Sexton, both for now and his future. “I think as a player you’re very selfish; you do take a lot from your family. You give them a lot as well – it’s a livelihood, it’s providing for them – but at the same time you’re very selfish. Take the day before a game you’re trying to get as much rest as possible, you’re trying to do all the things you need to do before the game. For a coach it ten times that.”

Sexton has picked up a range of skills from his former coaches including active listening from Joe Schmidt. “We weren’t allowed notebooks when Joe was at Leinster because he said if he was making a point and people were writing down that point, they miss the next one. He wanted us to listen, be attentive and make some notes later. When preparing for the game I try to do a bit of recall later in the week, write down the gameplan points and the plays I’m going to call on the day. Old habits die hard. I’m probably the only one that sits there now without a notebook.”

Will he go on to coach? 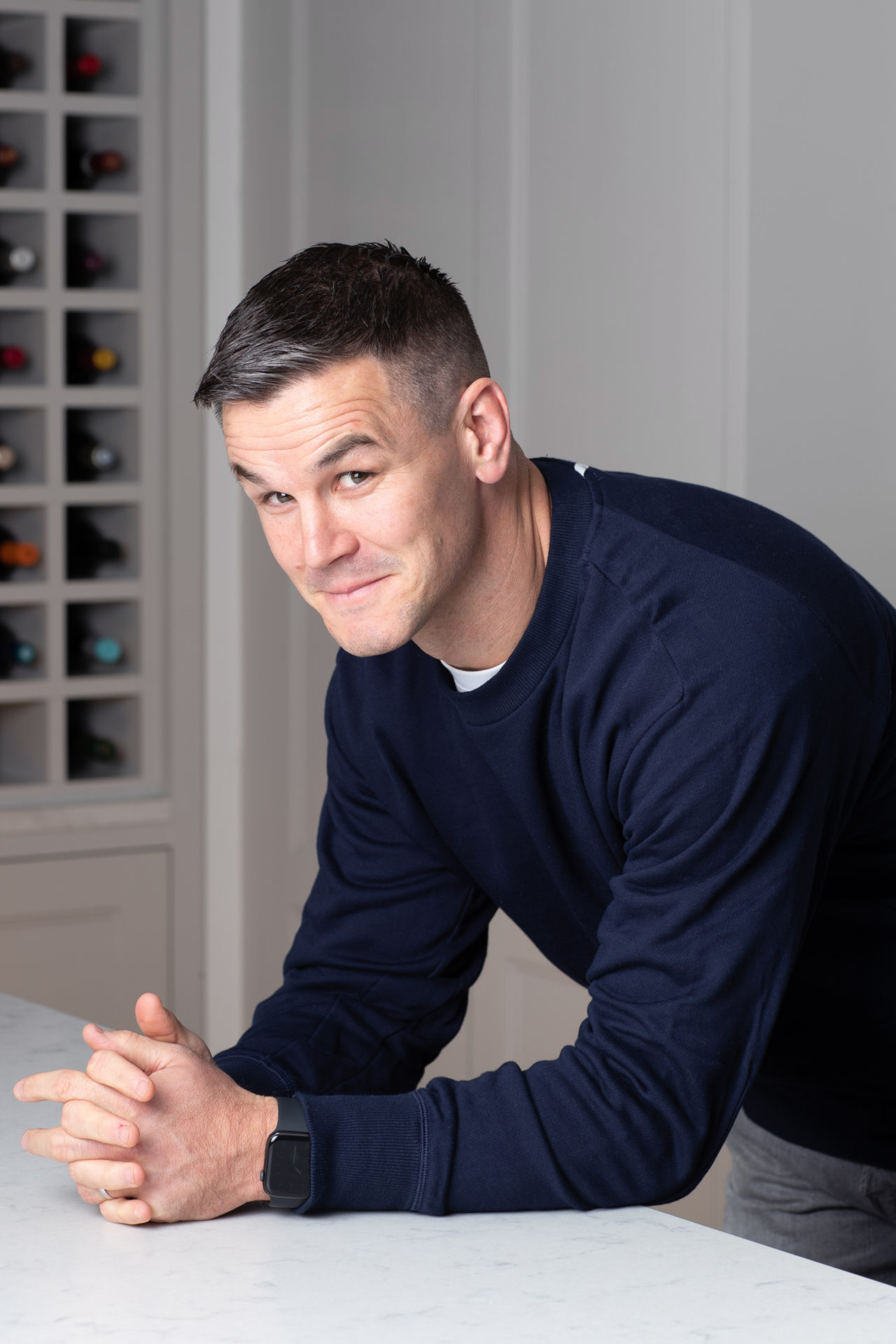 Johnny says his playlist includes all the Disney classics, firm favourites of his kids.

What music he listens to

The mixed-age squad has varying musical tastes with everyone contributing to the playlists they hear in the post-match changing room. “So, you come in after a game and tunes are playing. Some of the younger lads like the older stuff as well.”

What’s he currently listening to? “I’m on shuffle and all these songs, there’s Moana, and Encanto, are all coming on.,” he says, adding with a quip, that: “My playlist isn’t going on in the gym anyway.”

Is he a reader?

Does he like to read? Yes, but only with purpose. “I rarely sit down and read a book start to finish. I like to get to the good bits. Whether it’s an autobiography, about a team, or a self-help book, I’ll always flick through and try and take the best of it. I don’t like wasting time.”

For now, home remains Dublin. It’s Laura, and the kids. Downtime is also a meal out with wife Laura or with good friends outside of the game. There are occasional nights out with the team too. “One of things that we do as a squad – there’s a band that plays all the old Irish songs called Rake The Ashes and we go and see them whenever we can in town.” The balladeers play on Sundays in Cassidy’s bar on Dublin’s Camden Street in D8.

Home is where he does those extras that keep him a beat ahead. There are old habits and new tips, but no silver bullets.

Apart from one, maybe. When asked about his secret to staying young he cracks a cheeky smile and laughs. It’s easy: “Get your hair cut every week; it gets rid of the greys”.

For a chance to win a €100 One4All voucher, follow this link: https://groupmireland.eu.qualtrics.com/jfe/form/SV_a66bB9rR2rTqP4y

Six Connacht players, including a Mayo man, in Irish squad for Fiji Test