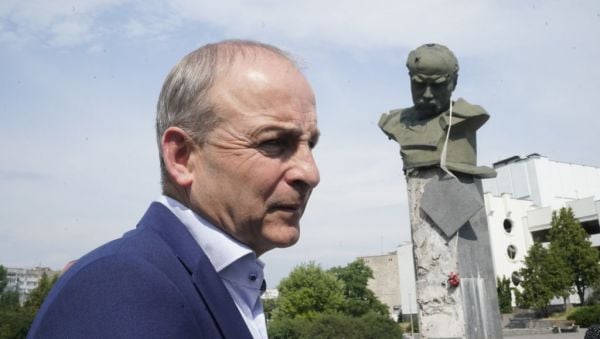 Taoiseach Micheál Martin has cast doubt on whether there is a list of Irish officials who are banned by Russia, calling the announcement “classic Russian propaganda”.

The Kremlin said on Wednesday that 52 “key representatives” from Ireland had been placed on a sanction list for expressing what it claimed was Russophobic sentiment.

Six senior politicians were named – including Taoiseach Mr Martin, Tánaiste Leo Varadkar and Foreign Affairs Minister Simon Coveney – but the Kremlin claimed there were 46 others.

A meeting was held between a senior government official and the Russian ambassador on Thursday afternoon; Mr Coveney is currently in Washington to meet with officials about issues such as Ukraine and the Northern Ireland Protocol.

Speaking at the Sports Ireland National Indoor Arena in Dublin, the Taoiseach confirmed that there had been a meeting between the deputy secretary general of the Department of Foreign Affairs and Russian ambassador Yury Filatov.

“The message was conveyed to him that this behaviour by Russia is absolutely unacceptable and not the norm in a diplomatic situation to be really essentially engaging in propaganda, a form of hybrid warfare,” Mr Martin said.

“So it’s unacceptable behaviour, that message has been conveyed today.”

When asked if he knew who was on the full list, Mr Martin said it was an example of “classic Russian propaganda, disinformation”.

“General form across Europe on this is that they announce that so many have been (put) on a list, but the list never gets published.

“So I’m not sure there’s a list of 52 out there. I haven’t got a readout from the meeting.

“But the key point is the nature of the action by the Russian Federation in sanctioning the Taoiseach of Ireland, and the Tanaiste and other ministers, it’s classic misinformation.

On the announcement that toll charges across nine motorways would increase from January to the maximum rate, Mr Martin said the government has “some concerns with the timing of this, given we’re in the midst of an energy crisis, people have a lot of pressure on in respect of cost-of-living issues”.

Mr Varadkar, also speaking from the indoor arena, suggested that “just because the maximum toll is set at a certain rate” does not mean it has to be raised to that maximum.

The Tánaiste also confirmed that he had asked minister for social protection Heather Humphreys to fill in as Minister for Justice when Helen McEntee goes on maternity leave next Friday.

He said this was done after speaking to his coalition party colleagues; on Wednesday Mr Varadkar said he had someone in mind for the role, but had not yet consulted with the Taoiseach or minister Eamon Ryan.

“It’s quite a short period. It’s just between the end of November and December 17. She’s done it before, knows the territory and did it very well, but it doesn’t prejudice any decisions that might be made on December 17,” he said on the expected Cabinet reshuffle.