Vicky Phelan’s death ‘will leave a void in all our lives’, family says in tribute 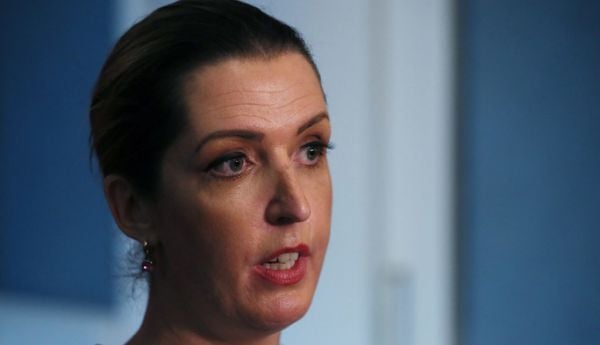 Cervical cancer campaigner Vicky Phelan has been hailed as a woman of “extraordinary courage” and a “national treasure” following her death at the age of 48.

President Michael D Higgins said the mother-of-two will be “deeply” missed by all of those who were in awe of her courage and her resilience.

Ms Phelan died in the early hours of Monday morning at Milford Hospice in Limerick after a long battle with cervical cancer.

The Limerick native is survived by her children, Amelia and Darragh, and her husband Jim.

Ms Phelan’s family paid tribute to her, saying she will leave a void in their lives that “at this point seems impossible to fill”.

“It is with an immense burden of grief that earlier today we bade our final farewell to our beloved Vicky,” a statement from her husband Jim and children Amelia and Darragh said.

“She was the heart and soul of our family unit and her passing will leave a void in all our lives, that at this point seems impossible to fill.

“We cherish the memories of a loving wife, mother, daughter and sister, whose ability to deal with the struggles of life has inspired not only ourselves but an entire nation.

“The outpouring of grief and good wishes from far and wide are truly appreciated. Funeral arrangements when made will be private, with an opportunity for people to pay their respects in due course.”

Ms Phelan grabbed the attention of the Irish public in 2018 after bringing a High Court case over how her cervical smears tests were handled.

She was diagnosed with cervical cancer in 2014, three years after a smear test result she had undergone was wrongly reported as clear.

Her case prompted more than 200 other women to come forward over misreported smear test results and led to a series of reviews of Ireland’s cervical cancer screening programme CervicalCheck.

Very saddened at the passing of Vicky Phelan, a woman of great courage, integrity, honesty & generosity of spirit.
She will be long remembered as someone who stood up for the women of Ireland, & globally.
Our condolences go to her husband Jim, Amelia & Darragh, friends & family.

Despite receiving a terminal cervical cancer diagnosis, Ms Phelan actively campaigned for better healthcare and better accountability in the healthcare system and co-founded the 221+ advocacy group alongside campaigners Lorraine Walsh and Stephen Teap.

President Higgins said anyone who had the privilege of meeting Ms Phelan will have been struck by her “powerful inner strength and dignity”, while Taoiseach Micheál Martin said she was a “woman of extraordinary courage”.

Mr Higgins said: “All of us who had the privilege of meeting Vicky will have been struck by the powerful inner strength and dignity with which she not only faced her own illness, but with the sense of commitment to the public good and the rights of others with which she campaigned.

“Vicky, in all of this, made an enormous contribution to Irish society. Thanks to her tireless efforts, despite the terrible personal toll she herself had to carry, so many women’s lives have been protected, and will be protected in the future.

“She will be deeply missed, by all of those who were in awe of her courage, her resilience, offered not only to women but to all of us in Ireland.”

The Taoiseach described Ms Phelan as a “outstanding advocate for women across this country, and across the globe”.

“Vicky was a woman of extraordinary courage, integrity, warmth and generosity of spirit,” Mr Martin said.

“She made a very significant contribution to public life in Ireland and Vicky’s actions and commitment will live long in the memory of the entire nation.”

The Fianna Fáil leader said Ms Phelan “stood up” for the public interest and ensured the embedding of the principle of full public disclosure in the area of public health.

“Vicky always gave selflessly of her time to help others, even though she was going through severe illness herself,” the Taoiseach added.

Tánaiste Leo Varadkar said Ireland had lost a woman of “limitless courage, compassion and strength”, as he extended his sympathies, particularly to her children for the loss of their “incredible mother”.

“Vicky was a shining example of the power of the human spirit,” Mr Varadkar said.

“Her fight to uncover the truth and the courage with which she faced her illness made her an inspiration to us all.”

Former Labour leader Alan Kelly described his friend as the “most incredible human being probably I’ve ever met”, while Dr Gabriel Scally, who led the review into Ireland’s cervical cancer screening programme, said she will be regarded as having a “seminal influence” on the healthcare system.

In a statement the 221+ CervicalCheck Patient Support Group said they had lost their “biggest big sister”, and asked that the cervical cancer programme not fail others in Ms Phelan’s memory.

It is with a broken heart that we say goodbye to my great friend Vicky Phlean who got her wings today. 5 years ago she was told she only had a few months to live, she defied all the odds and through her strength and courage became a national treasure honouring us all with (1/3) pic.twitter.com/62Z7NWvrvF

Fellow campaigner Stephen Teap, whose wife Irene died of cervical cancer, said Ms Phelan had been told five years ago that she only had a few months to live.

“She defied all the odds and through her strength and courage became a national treasure honouring us all with her wisdom, love and great sense of humour,” he wrote in a post on social media.

Campaigner and cancer survivor Lorraine Walsh said she was “heartbroken” by the loss of her friend.

She said: “Vicky you fought so hard for all of us, I can’t believe you are gone, forever in my heart, thank you for your courage, strength, laughs and support, rest easy my friend, another life lost… heartbroken.”

Minister for Further and Higher Education Simon Harris said the country had lost an “incredible advocate and an incredible person”.

“She genuinely does change the country for the better,” the former health minister said.

National Women’s Council of Ireland director Orla O’Connor said Ms Phelan meant “so much to us all and we have so much to thank her for all she did for women in Ireland”.

Sinn Féin president Mary Lou McDonald described Ms Phelan as a “champion of women” who took on the State and won.

“Vicky should never have had to be a campaigner, but her advocacy on behalf of Irish women will never be forgotten,” Ms McDonald said.

Ms Phelan was awarded the freedom of Limerick earlier this year, and was named as one of the BBC’s 100 most inspiring and influential women around the world in 2018.