A man was winched and rushed to hospital by helicopter when an accomplice raised the alarm after the pair were stranded for three days off Dooega Head when their boat capsized.

The Achill Coast Guard team arrived at the scene to help the two men on Friday afternoon some 72 hours after the yacht overturned in dangerously high seas. 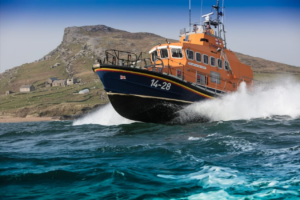 One of the two men on the vessel managed to scale the cliffs and alert the emergency services.

The casualty was winched to safety and taken to Mayo University Hospital.

Customs officers and An Garda Síochána took charge of the operation on Saturday.

Achill Coast Guard thanked their colleagues in Rescue 118, Gardai and Achill Island RNLI for their assistance.

Peter McManamon of Achill Coast Guard said: “They were at the back of Dooega Head for three days.

“One of them managed to climb up the cliffs and raise the alarm.

“But conditions weren’t great so we got the helicopter to come down, R118 and they airlifted him.

“Then today [Saturday] we were stood down and the customs and the guards took over.

“They were doing a salvage on it.

“Marine investigation guys came down and they took over from us.”