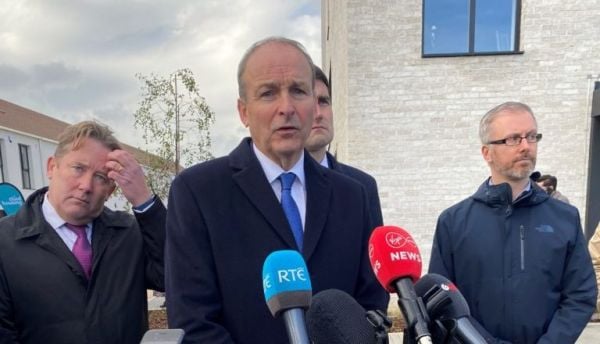 There is a legitimate basis for a discussion on whether there is a need to reform and “recalibrate” the governance system in Northern Ireland, the Taoiseach has said.

Micheál Martin said there should be a move towards a more “normal government” and “opposition-style politics” in the region.

Mr Martin made the comments as political instability in the North rumbles on, with the DUP’s continued boycott of the devolved institutions in protest over post-Brexit trade rules.

The DUP used its veto last week to block an attempt to elect a new speaker of the Assembly.

Speaking in Dublin on Tuesday, Mr Martin said a reform of the powersharing institutions would facilitate the growing centre ground politics in Northern Ireland.

He added that May’s election in the North should be “vindicated and validated”.

“The elections took place in the existing framework, therefore the first minister and the deputy first minister should be allocated in terms of how people voted,” Mr Martin said.

“However, once that happens, I think there is a legitimate basis for a discussion between the political parties and the two governments, as to whether the mechanisms and the framework that was designed 25 years ago, should be recalibrated.

“I don’t think it’s satisfactory that the party like Alliance, which had a significant breakthrough are essentially excluded. I don’t think that can stand up too much longer. That would be my view on that.

“Again, it’s a matter of discussion now between the priorities of government as to how one constructs an alternative to that, but I think it would be a move towards a more normal government, opposition-style politics.

“Given what’s happening across Europe, in terms of coalition governments forming and so on, I think there’s options now that may not have been there 25 years ago.”

He also said that a deal reached between the European Union and the British government could see the restoration of the institutions in Northern Ireland.

Mr Martin said the restoration of the Northern Ireland Executive and the Assembly is “essential”.

“There are legal realities that the British government has to deal with,” Mr Martin said.

“On the other hand, we have to ensure that the discussions between the European Union and the United Kingdom can continue which they will, and objectively if we could get a result on that front, then there may be opportunities in terms of the Assembly and the executive.

“But fundamentally, I put it to the DUP that they should go back into the assembly and into the executive. It’s a denial of democracy not to do so.

“It is imperative on all political parties to make the institutions work and it can’t be an option to close down the executive and the assembly because you may have a disagreement with a political position.

“The constitutional position of Northern Ireland was not undermined in any way by the protocol. It was designed to reflect the unique situation that Northern Ireland is in, as per the Good Friday Agreement.

“Many people in industry and business speak positively about the impact the protocol is having in terms of manufacturing or in terms of the food chain, in terms of agriculture and food production. There are areas that legitimately do need to be worked on.”

Mr Martin said it was a matter for the European Union and the British to hammer out an agreement that would deal with the Northern Ireland Protocol issues.

Meanwhile, Mr Martin also urged those at the centre of a loyalist threat against the Irish Government to stop and desist.

It was reported in recent days that a letter issued by a loyalist group warned of “dire consequences” if there was a form of joint authority to resolve powersharing issues.

Mr Martin said he may get a security briefing later on the matter.

He added: “I would condemn any person who advocates violence. We’ve all seen and witnessed in our lives the appalling impact that violence has had on people on this island.

“People do not want violence back. I would say to those involved to stop and to desist from those kinds of threats.

“Politics is supreme now, it’s politics and politicians engaging with each other that can resolve these issues and it’s reprehensible that anybody would threaten any politician in my view.”