Poignant tributes have been paid to a heroic volunteer diver who died trying to save a stricken family during a rescue operation in Belderrig 25 years ago by Garda Commissioner Drew Harris.

Married father of two Michael Heffernan, who tragically lost his life on October 25, 1997, was praised for making the “ultimate sacrifice” during a special commemorative event on Saturday.

Grainne Uaile Sub Aqua Club chairman JF Brisson said many of them fondly remember and miss one of their founding members who he described as a “guardian angel” watching over them. 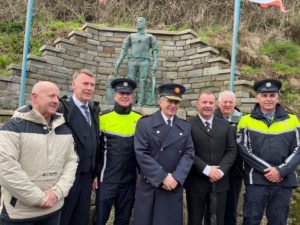 Fr Kieran Holmes led prayers for Michael, whose wife Ann-Marie was pregnant with their youngest daughter Michelle at the time of the tragedy, and local resident Will Ernest von Bellow.

The 53 year-old retiree also died after he took friends Tony Murphy, wife Carmel and daughter Eimear out on his boat exploring the caves at Horse Island.

The vessel overturned and in the intervening hours, dozens of rescuers arrived and participated in what was one of the longest rescue operations in the history of the State.

Michael, who entered the cave with his clubmate Josie Barrett, tragically died when strong currents pushed him onto rocks inside the cave.

Since his passing, the late 38 year-old’s brave and selfless action have been remembered and honoured by the award of the Carnegie Hero Trust Medallion, by an RNLI bravery award and by the Dr John Igoe Community Award. 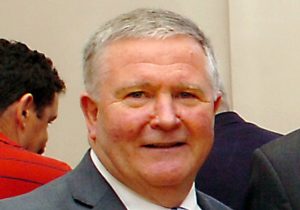 He addressed about 120 people in front of a statue of the late rescuer and started his speech by reciting a line that his dad Dr Mick Loftus, the former Coroner For North Mayo, said at the inquest.

“On that day my father said, ‘There’s no greater love than to lay down one’s life for one’s friend’. “That really was Michael and what he did that night we will all be grateful forever and thankful.

“Twenty-five years ago, Michael was part of a rescue that was involved in the rescue of the three Murphy family [members] and I’m delighted they’re here today.”

Others who were welcomed to the event included Michael’s brothers Kevin and Padraig, sister Breege and their families as well as Garda Commissioner Drew Harris.

There was a respectful silence as youngest daughter Michelle laid a wreath in memory of her dad, while wreaths were also laid by Commsr Drew Harris and retired chief supt Tony McNamara on behalf of the rescue services.

Leo Loughney of the Lacken Drowning Committee also paid tribute to the experienced diver and stated that they always remember Michael when they hold annual commemorations for the nine local fishermen who died on October 28, 1927

“The Murphy family had found themselves trapped in a cave and were eventually brought to safety, but that rescue came at an exceptionally high price.

“Two men had lost their lives, Michael Heffernan and Will Ernest von Bellow and in their efforts to bring this family home safe and sound they paid the ultimate sacrifice.

“As garda commissioner it is my great privilege and I’m very proud to know that members of the Garda Water Unit were flown from Dublin to provide assistance and they all showed great bravery and dedication.”

Sean McHale and Martin Kavanagh of Killala Coast and Cliff Rescue were the first on the scene along with the Ballyglass Lifeboat and Shannon Rescue Helicopter at about 6pm.

A little later four members of the Grainne Uaile club later arrived, including Michael and Josie Barrett, who courageously ventured into the pitch-dark, 1,000-foot-long cave where the tragedy occurred.

Others who attended the commemorative event on Saturday included Sgt Ciaran Doyle of the Garda Underwater Unit who bravely volunteered to swim 1,000 feet through the waters to the entrance with a line and this allowed the Murphy family to be rescued.

A Scott medal was subsequently awarded to Sgt Doyle while silver Scott medals were awarded to Gda Dave Molloy and Gda Sean O’Connell.

Retired Chief Supt Tony McNamara who was the officer in charge and was also cox of the Ballyglass Lifeboat during the rescue operation, called on Commsr Harris to honour all five gardaí who were involved.

The head of An Garda Síochána stated he “may have to review the file again” to include Garda Kieran Flynn and Garda Joe Finnegan.

Cllr Loftus also remembered late chairman Pat O’Malley and thanked Dave Courtney, who flew the Rescue 115 on October 25, 1997, for his support of the diving club.

He concluded his speech by thanking everybody involved and vowing that “Michael will never be forgotten”.

Meanwhile, Grainne Uaile Sub Aqua Club chairman JF Brisson said Michael was a big part of the foundation of the Grainne Uaile, which is now one of the biggest diving clubs in Ireland.

“This is his legacy. Another legacy is on safety and prudence; this is a tragedy that taught us a lesson that is now carried by our instructors. We also have a boat named in his honour to remind us every time we use it.

“Because of people like Michael several generations of divers have benefitted from our lovely coastline and sites. When we dive, we know we have a guardian angel looking out for us.”