Garda Horkan murder accused said: ‘With all that’s going on with the police in this world, I shot him’ 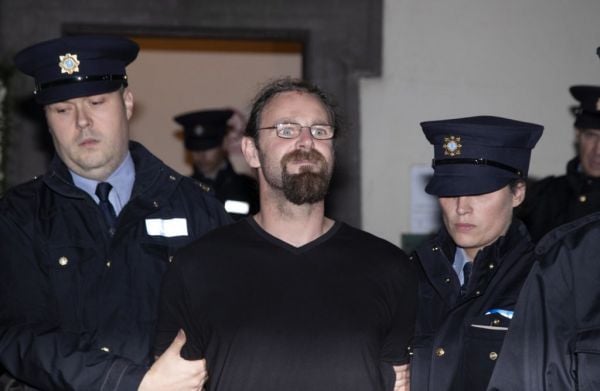 Stephen Silver, who is accused of murdering Detective Garda Colm Horkan, told gardaí that the deceased attacked him and added “with all that’s going on with the police in this world, I shot him,” a barrister told the Central Criminal Court on Friday.

Opening Mr Silver’s trial, prosecution counsel Michael Delaney SC said the accused man then said something about Black Lives Matter, which the barrister suggested may have been a reference to the killing of George Floyd in America some months previously.

Mr Delaney also told the jury of seven men and five women that the accused later told gardaí in interview that there was pushing between Gda Horkan and himself before the garda went for his holster, got his gun out and “must have shot himself”.

He said he was, “angry about it because a garda tried to kill me”.

Mr Delaney said an issue which the jury may have to decide is whether Mr Silver was “ill-disposed towards gardaí” at the time and whether that “manifested itself in his actions during the day and, more importantly, in the course of the encounter with Garda Horkan”.

Mr Silver (46), a motorbike mechanic from Aughavard, Foxford, Co Mayo has pleaded not guilty to the murder of Det Gda Horkan knowing or being reckless as to whether he was a member of An Garda Síochána acting in accordance with his duty. He pleaded guilty to manslaughter by reason of diminished responsibility.

Mr Delaney told the jury that Det Gda Horkan was 49 years old and had spent nearly 25 years as a garda when he was shot dead shortly before midnight on June 17th, 2020, at Castlerea, Co Roscommon.

He was a single man who lived with his father in Charlestown. The accused man, he said, grew up on the outskirts of Castlerea, left school after his junior certificate exams and had worked in construction and as a fitness instructor before setting up his own business as a motorcycle mechanic at a garage outside Foxford in Co Mayo where he lived.

He was married but had been separated three months prior to the death of Det Gda Horkan.

Mr Silver has a history of mental health difficulties which Mr Delaney said the jury will hear about during the trial.

In the days prior to the shooting, Mr Silver was in the company of an Australian woman who was visiting Ireland for the first time. They stayed together at a hotel near the airport in Dublin on June 15th and 16th, and she flew out on the 17th.

The accused left Dublin that morning and arrived in Castlerea in the early afternoon where he met a friend. The friend showed him a video that had been posted to Facebook some weeks earlier showing a garda raid on the home of an old friend of Mr Silver’s, James Coyne.

The accused had not met Mr Coyne for some years but became “quite exercised” and went to Mr Coyne’s home in nearby Knockroe.

He spoke to Mr Coyne, and they travelled together into Castlerea and stopped at the garda station where Mr Silver told gardaí he wanted to make a complaint “of an elderly person being abused by gardaí”.

Mr Delaney said the accused man told gardaí he had evidence on his phone and was “going to take it further”.

The two men went to Mr Silver’s garage and Mr Coyne tried out a motorcycle belonging to the accused. They then returned to Knockroe where they took it in turns to drive the motorbike without lights or helmets around a green area in the estate. Neighbours called gardaí and counsel said one neighbour will say that he heard someone matching the description of the accused saying: “I dare the armed squad come down here now.”

The bike was put away, counsel said, shortly before midnight and Mr Coyne and Mr Silver went towards the centre of Castlerea to get some food.

At 2pm that day, Det Gda Horkan had taken up duty at Castlerea Station and took possession of a standard issue firearm and an unmarked Hyundai garda patrol car. At about 11.47pm he drove to Knockroe but Mr Silver and Mr Coyne had already left on foot.

Garda Horkan drove along Patrick Street where he came upon the two men, pulled up alongside them and wound down his passenger side window. Mr Delaney said different witnesses saw different parts of what followed, but there was “some form of exchange” after which Gda Horkan got out of the car, approached the accused and told him he was going to arrest him.

There was a physical struggle, counsel said, which “evolved into a struggle for the firearm and a shot was discharged and Garda Horkan was wounded”.

Counsel added: “At that point the accused man rolled away with the gun and proceeded to repeatedly shoot Garda Horkan.”

Following the shooting, 15 cartridges were found at the scene, indicating that all the bullets in the gun had been discharged, Mr Delaney said.

Another garda car passed and saw the two men grappling but did not recognise Gda Horkan. They continued on but when they heard shots they turned around and used their car to block the street.

Garda Helen Gillen approached and saw the accused man throw away the gun. Mr Delaney said she will give evidence that she told Mr Silver to lie down, which he did, but he then got on his knees and said: “That man tried to attack me and with all that’s going on with the police in this world, I shot him.”

He added something about Black Lives Matter which counsel said may have been a reference to the killing of George Floyd by American police some months earlier.

Mr Silver was arrested while other gardaí attempted to resuscitate Gda Horkan. It quickly became apparent that he had sustained fatal injuries, counsel said, and had died at the scene.

A postmortem carried out by Dr Linda Mulligan the following day would show that he had suffered eleven gunshot wounds from multiple angles. There was a cluster of wounds to the neck and shoulder, another wound to the right upper abdomen and three bullet entry wounds to the back.

Mr Delaney said there also was a suggestion that Gda Horkan was shot while he was on the ground. He suffered massive internal bleeding and multiple fractures and Dr Mulligan concluded that his “catastrophic injuries” would not have been survivable even with immediate medical intervention.

There was further evidence of blunt force trauma to the left eye and temple which may have been caused by a blow from the butt of the gun, Mr Delaney said.

During five garda interviews over two days, Mr Delaney said the accused gave an account of what had happened. In his first interview, the accused said: “Then this big blue car pulled up, and this lad said,  ‘who are you’, and I said, ‘I’m Stephen Silver’ and he said, ‘I’m a garda and I seen a Tommy Hilfiger jacket, I didn’t know who he was.'”

Counsel said the accused man described being pushed by Gda Horkan and said: “He was in my face.”

Mr Silver continued: “I pushed him. I felt him going for something. He had a holster, next thing he had it out, then bang, bang, bang, bang. He must have shot himself.”

Mr Silver said he got the gun off Gda Horkan and added: “I must have shot him without my glasses.” He said he threw the gun away and saw that Gda Horkan “wasn’t in a good way”.

He also said: “I’m angry about it because a garda tried to kill me, is that a garda car?”

Mr Delaney said: “That is a flavour of the account provided by the accused man.”

Counsel told the jury that to prove the charge against Mr Silver, the prosecution must prove the ordinary ingredients for murder and that Mr Silver knew Gda Horkan was a garda acting in accordance with his duty or that he was reckless in that regard.

Mr Delaney said the prosecution would show that it was “obvious” to Mr Silver that he was dealing with a garda and that this is borne out by what Mr Silver said in the immediate aftermath and by what witnesses heard Gda Horkan say to him.

He said the defence is arguing for a manslaughter verdict based on diminished responsibility due to a mental disorder and the jury will hear from a psychiatrist for the prosecution and the defence. Mr Delaney added: “They [the defence] will say he was suffering from a relapse of his mental health difficulties such that his responsibility for the death is substantially diminished. The prosecution disagree and say he had a significantly functioning mental capacity, but ultimately the issue will be for you to decide.”

Mr Justice Paul McDermott adjourned the trial until Monday after telling the jury not to speak to anyone about the case or to look at media coverage. He added: “The only thing you are concerned with is the evidence you hear in this courtroom, uncontaminated by anything else.”