On what is the opening weekend of the 2022/23 National Basketball League, there was a uniquely Mayo and family feel to the meeting of Trinity Meteors and University of Galway Mystics in the top flight of the MissQuote.ie Super League on Saturday night. 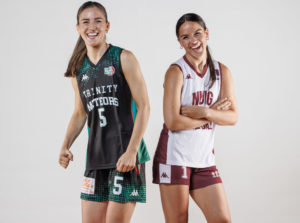 Kiltimagh sisters Dayna Finn of Trinity Meteors and Hazel Finn of NUIG Mystics were in opposition on the opening day of the MissQuote.ie Super League season. Picture: INPHO/James Crombie

Trinity are among the teams highly fancied to challenge for this season’s title and in their ranks is Irish senior international Dayna Finn from Kiltimagh. But treading the boards against her for the newly-promoted University of Galway Mystics was younger sister Hazel, herself no stranger to Ireland’s underage teams. The pair turned out to their respective teams’ top scorers on the night, Dayna scoring 22 points for Trinity and Hazel 19 points for the Mystics, but it was older sister Dayna – a noted Gaelic footballer with Mayo also – who had the last laugh as the Dublin outfit got the better of last season’s Division 1 champions 87-70. Trinity’s summer signing, Claire Melia, ended the game on 15 points.