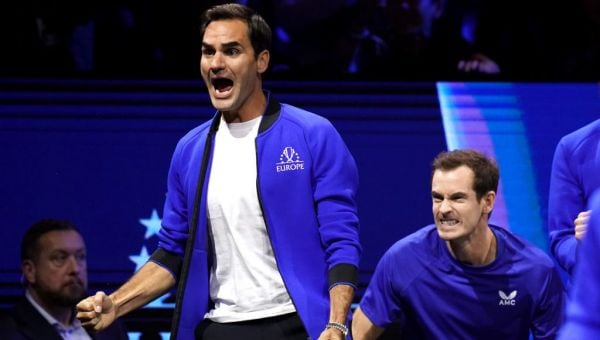 Andy Murray has backed Roger Federer to captain Team Europe in the future.

Federer bade farewell to professional tennis at the Laver Cup at the weekend, playing doubles alongside great rival Rafael Nadal on Friday in his final competitive match before he had a watching front for the last two days of the Ryder Cup-style team tournament.

Team Europe suffered a 13-8 defeat to ensure Federer could not bow out with one final trophy added to his illustrious CV, but with Bjorn Borg confirming the sixth edition in Vancouver next year will be his last, a vacancy for the captaincy will open up.

A valiant effort from Team Europe on what was a uniquely memorable week in London.#LaverCup pic.twitter.com/BICNBIw8Ej

While 20-time grand-slam champion Federer reiterated on several occasions that he had no immediate plans, it feels inevitable he will be involved in the competition he helped to create, especially after providing so much on-court advice during the past weekend at the O2.

“I’m sure Roger is going to stay involved in the event in some capacity and maybe one day captain the team,” Murray predicted.

“Look, he’s great on the side. He watches a lot of tennis, he loves the game. I think for ex-players that go into coaching, I think that’s important to sort of stay current and know a lot of the players.

“You know study the matches and stuff to understand the players’ strengths and weaknesses. Yeah, I don’t know if that’s something that he will go into, but I hope he remains part of tennis.

“He said he would. Like I said, I’m sure he will be here. Maybe he does a little bit of TV. I know how much he loves Wimbledon. Yeah, great for tennis if he can stay around a little bit.”

Murray was one of the big four present for the opening night of the fifth Laver Cup in what initially helped drum up interest in this year’s event before Federer announced it would be his last hurrah.

A unique part of the competition was rivals sharing pointers and becoming cheerleaders for their Team Europe team-mates.

Novak Djokovic was a big part of the weekend and expressed his hope that Federer will turn his hand to coaching.

He said with a smile: “I think that Roger can offer a lot. I mean…it’s logical to expect him to be able to share so many useful and valuable things with anybody really.

“If he ever would consider doing that, I’m sure that he’s going to bring a lot of positive things to the improvement of that player, whether male or female, in every aspect on and off the court. He’s undoubtedly one of the greatest players to play the game, the way he played it, with his style and effortlessness.”

Both Murray and Djokovic tasted defeats on the final day to prevent a dream finale for Federer, who watched Team World win a maiden Laver Cup by a five-point margin.

A key feature is points being worth one on the first day, two on the second and three on the final day, which ensures no winner can occur until the third day.

Singles and doubles contests also take place on each day and Murray gave the Laver Cup format a big thumbs up following his debut in the tournament.

“From a player’s perspective, yeah, this event is special and it is unique,” he insisted.

“You cannot be on the tennis court, with all of these guys, top players that we all have huge respect for, and the captains on the side of the court, Rod Laver in the stands, and not care about the result.

“I believe this competition has a lot of potential for the future.

“For all tennis players, that is special to be a part of. I like the format, as well. It keeps all of the matches interesting. Going into the last day, you know both teams have an opportunity to win. Yeah, I think it works well.”