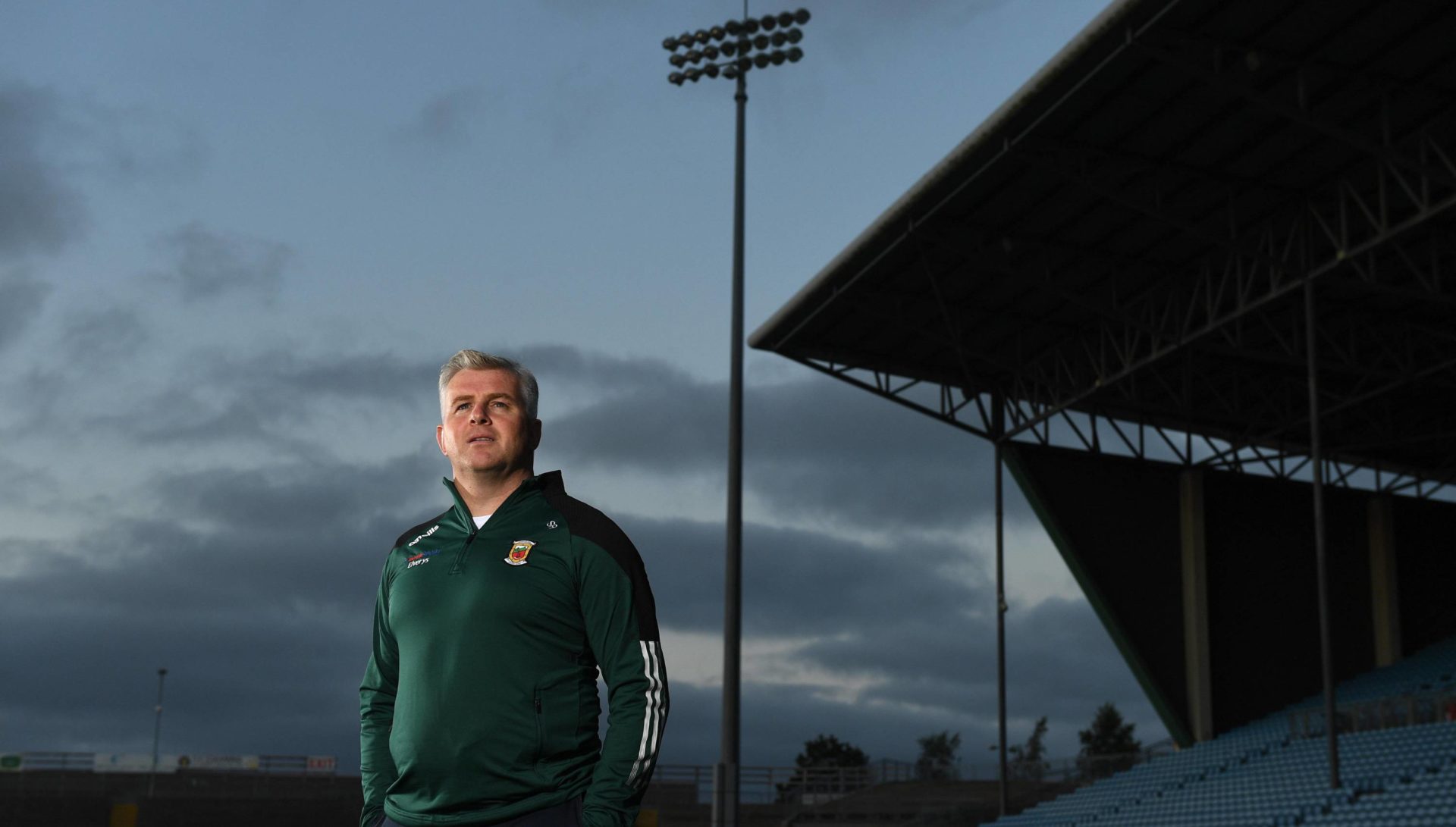 Stephen Rochford in Hastings Insurance MacHale Park for his official unveiling as assistant manager of the Mayo senior football team, five years after he stepped down as manager. Picture: Eóin Noonan/Sportsfile

24 hours. That’s as long as it took between Kevin McStay calling Stephen Rochford to ask would he join his bid to become manager of the Mayo senior football team and the pair sitting down face to face to plot and plan a new future.

24 hours can be a long time in Mayo football. On a Saturday in August 2018 I was informed by a senior Mayo GAA official that a meeting of the executive committee had been called for the following evening and that the executive would recommend that Stephen Rochford be reappointed in charge of the senior football team for 2019. The meeting took place but the committee balked at anointing Rochford amid confusion over whether proposed members of his backroom team had actually confirmed their availability. The executive instead committed to meeting Rochford and his management team “to discuss their structures and plans for 2019”. Fast forward another 24 hours and Stephen Rochford pulled the plug on his three-year tenure, saying he saw “no value in meeting with the officers of the board”.

All that, however, seemed water under the bridge when chairman Seamus Tuohy (vice-chairman at the time of Rochford’s resignation) officially presented Mayo’s new management team to the media at MacHale Park in Castlebar last Tuesday week. After five subsequent years as coach to the Donegal senior football team, Rochford, it was confirmed, would serve as assistant manager to Kevin McStay, the new Mayo boss.

You have to search hard for other instances where a manager of an All-Ireland reaching team has returned to serve that same team beneath a different manager. (It’s hard, for example, to imagine John Maughan asking or John O’Mahony accepting to be his assistant in 1996. Or O’Mahony asking and Maughan agreeing to become a selector in 2007.) But it’s not something that Stephen Rochford seems to feel awkward about, and nor perhaps should he. He and McStay go back a long way, as far back as when Rochford played for the McStay-managed Mayo U21s, and by and large they look cut from a very similar cloth.

“Kevin’s wider plan is a vision I am attracted to work with. We were very much on the same page around where we wanted to go with it,” explained Stephen. He said he hadn’t to think too long, nor too hard about signing up to Kevin’s management ticket once his proposed role had been defined.

“Being involved with Mayo seven or eight years ago, it was a big job and I loved every minute of it, even with the difficult times. The opportunity to come back and work with Kevin, and seeing the plans that he had in place, made that decision quite simple.”

The difficult times in some counties are failed attempt after failed attempt to win a championship match. The difficult times in Stephen’s instance were twice losing All-Ireland finals by the narrowest margin to a team recognised as the greatest ever to have played the game. He disagrees, however, that the point of his return is to attend to some unfinished business.

“Each year is its own year, you move on. It’s a new squad, each year there’s new people to it, there’s a new management team,” he reminds us, even if Donie Buckley, a key cog in Rochford’s own backroom too, is also part of McStay’s.

“There’s no doubt the experiences in Croke Park, those championship games, the rawness of what that is, the good days and bad days, there’s loads of learning in it,” said Rochford. “Kevin explained how he’ll be a better manager next week, next month, and I believe that’s what the last seven years in my inter-county experience has been about; being better from session to session.

“Mayo are still a top team in my eyes, they’re competing at the very, very top. The only business is to get to the work that’s in front of us now, which is the club games and the squad and taking that step by step heading for the pre-season.”

You would wonder though just how much of Stephen’s step back from manager to coach has been by design and how much has been by accident. There’s no doubt that after winning an All-Ireland Senior Club title as boss of Corofin and his successful – albeit trophyless – spell in charge of Mayo, the Crossmolina native could have had his pick of several of the top management jobs in the country. Instead, he accepted the less pressurised, less public role as coach of Declan Bonner’s Donegal team and now, even when rumours existed of Roscommon’s interest in luring the AIB official as their manager, again he has accepted a position where the most scrutiny will be directed in someone else’s direction. Indeed Rochford admitted on Tuesday that the demands of a young family and an important job made his role as assistant manager and coach the ideal fit. He was also asked for some more detail on his job description.

“If I was to say in one word what it is, it’s support. Support Kevin. There’s a lot to his role. My experiences with Mayo and Donegal will help alleviate a bit of that, to ensure that the whole team machine runs smoother. That’s a key part of it. Then obviously to work alongside Damien, Donie and Liam to improve one player, ten players, twenty players, one percent, ten percent, twenty percent. It’s all just about improvement, session by session, week by week, game by game. That’s how I see it and that’s aligned to Kevin’s step-by-step approach. 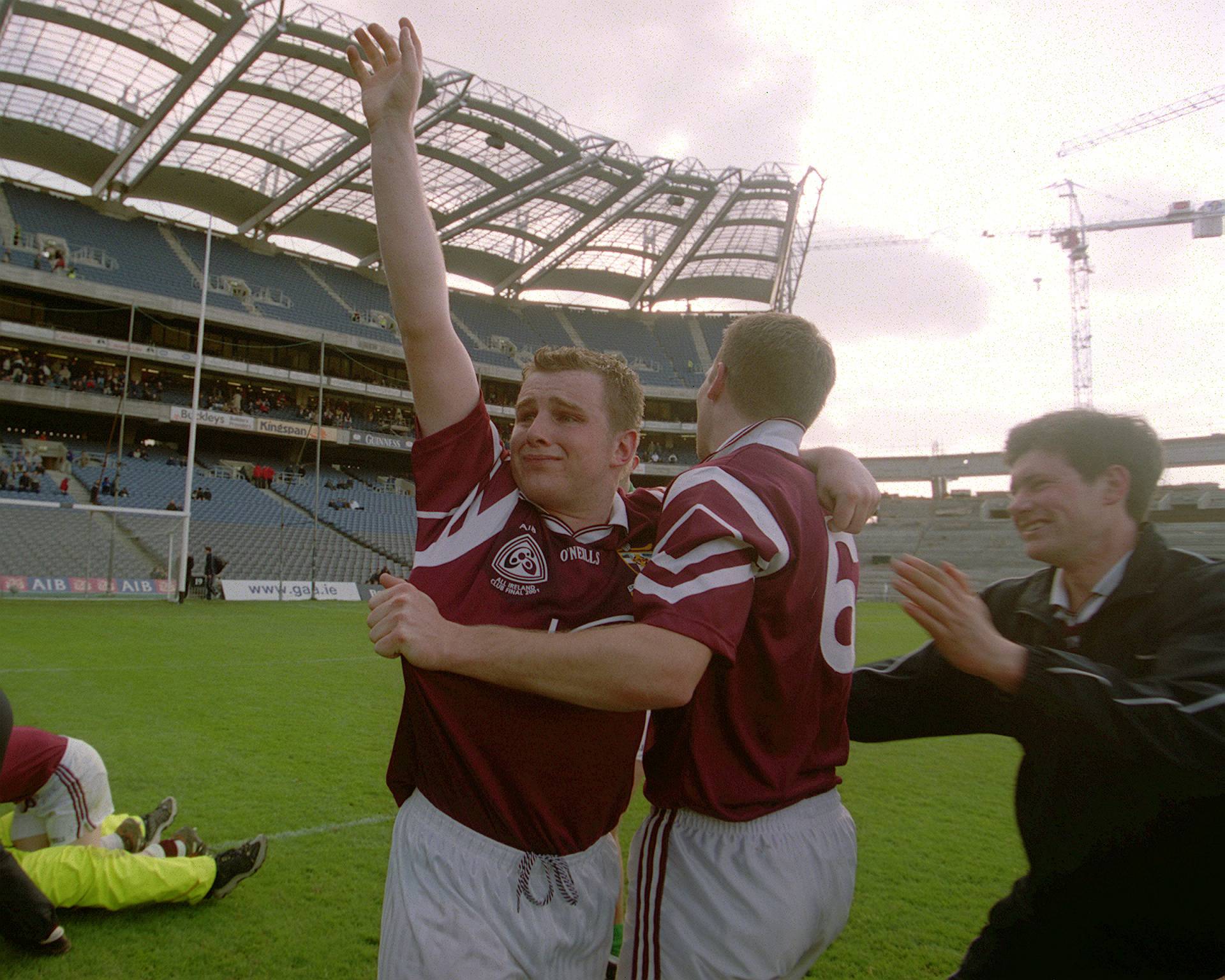 “I’ve been on a learning journey as such in Donegal and there was plenty to learn up there. Ulster Championship is enlightening in relation to what it brings and I like to think that I’m going to bring some of that back to the group as well.

“As a Mayo man I want to see Mayo competing at the very, very top and when you’re at the top there’s going to be pressure, it just comes with the territory. I’m happy to share that pressure (laughs at Kevin) and I hope we go long into the seasons and if [pressure] cranks up, so be it.

“The optimism with regard to what this new season is going to bring, that would put a pep in your step,” said the 43-year-old.