He admits he is the rookie within the management team and says it’s his hope that he gains lots of experience from the high-profile names around him but make no mistake, Damien Mulligan knows his remit and is busy already with the duties assigned to him by Mayo manager Kevin McStay, writes Anthony Hennigan. 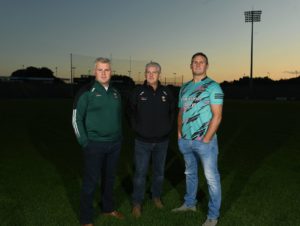 Mulligan, who won a county intermediate title as manager of Belmullet, who he subsequently guided to a first county senior final in 40 years, is to serve as liaison between county and club in addition to being coach and selector of the Mayo senior football team.

“The selector role has kicked off straightaway, we’re two weekends into the club championship and I’ve seen a lot of games already,” said Mulligan at his first press conference. “I’m looking forward to the next six to eight weeks and to seeing the championship out. It’s about identifying new players we can add to the panel, identifying consistency within those players within the game, and bringing them into the group.

“I would be au fait with a lot of the club footballers in Mayo. Everyone knows the inter-county players but the fringe players, or players who may have gone through the underage set-up over the last X amount of seasons, we’ll be getting the guys out to look at those. We’re getting around to all the games and watching as many footballers as possible and seeing if we can identify the players who are consistently performing, week on week. And hopefully we’ll all get to look at them, we’re challenging each other and highlighting to each other the players we need to be looking at.”

Mulligan, who as a player won an All-Ireland Senior Club title alongside Stephen Rochford with Crossmolina in 2001, said the management team has already discussed in detail the necessity of strengthening the depth of the panel “for the unique season that is ahead of us” and the need of having the right players ready for the pre-season period. He also spoke a little about what enticed him to respond positively to the offer of joining Kevin McStay’s backroom.

“The first conversation I had with Kevin, it was the energy he brought. The energy of the conversation and his enthusiasm, that’s what sold it to me. I like his visions, I like his thoughts and then the quality of the people he had in the management team, that sold me.

“Obviously coming from club management and making the next step up, I’m delighted to be involved and thought of in those circles,” he admitted.