Colm is primarily a sculptor, with public pieces of his work all over the country (including the 1798 monument at the Market Square in Castlebar), and continues to work every day in his studio near Gorey, Co Wexford, having handed over the running of Cast Ltd Bronze Foundry to his son, Cóilín, some time ago.

Colm was born near Belmullet in 1943 and still has a deep grá for the place, although he spent much of his youth in Ballina. He mentions that his maternal grandmother, Mary Doherty née Walsh, from Muings, Barr na Trá was a fine Gaelic, sean nós singer. 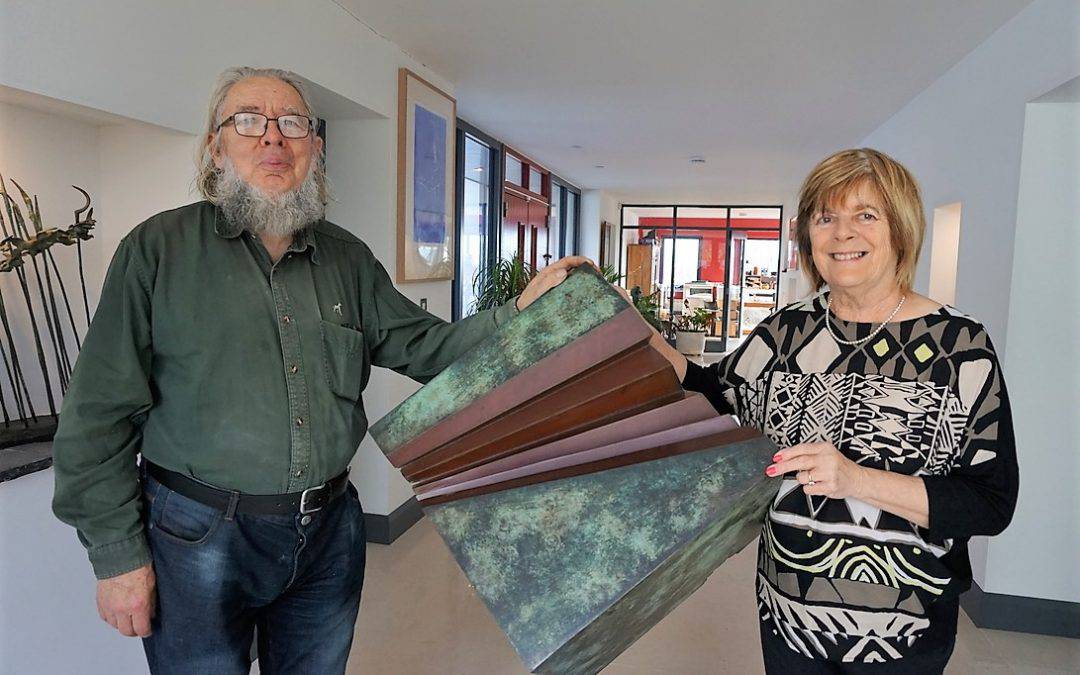 Colm and Sally Brennan in their home in Co Wexford.

His inspiration to compose came from a concert organised by his father Jim who was principal of Bofield National School, Bonniconlon, in the 1950s. It was the moving rendition of ‘The Valley of Knocknaure’ by the late Mariagh Howley that inspired him. The song and her particular traditional style were very different from what he had heard on the radio on programmes such as ‘Ballad Makers Saturday Night’. Mariagh’s telling of the fate of the Kerry martyrs was told in a vivid, direct and honest way and had an enormous impression on the young boy.

Colm has written over 80 songs since he first began writing back in 1995. He has been involved in teaching sean nós songs where he lives in Gorey for the past seven years and was one of the founding members of the North Wexford traditional singers and he also writes songs which he sings at other singing circles, including the South Wexford singers. This group have singers from Ireland, Britain, Europe and the USA at their annual weekend get-together in Rosslare.

His traditional songs, he stresses, are songs that tell a story and fall into a number of broad categories: history, pride of place, exile, political, topical and light-hearted pieces. He looks at historical events and topical themes such as the ‘Massacre at Carnew’ and events like the Wexford sailing ships travelling all the way to Ukraine in the 1860s or songs about the on-going war in that same country.

He relies heavily on an opening phrase to get him started and then he searches carefully for an air either traditional or composed by himself.

He hums an air and if it seems promising then writes it in tonic sol-fa such as his father Jim would have used when teaching Colm in Bofield in the ‘50s. Jim Brennan was himself a gifted man of music, song and verse. Indeed, both father and son have written poems about Land League founder Michael Davitt.

Recently, Colm has been using some airs that were written by Turlough O’Carolan 300 years ago. He carefully prepares a draft in one or two sittings and then revises, before completing the final version. One song of Colm’s that greatly impressed this writer was about the Travelling people and how the world changed for them and their ancient way of life; it is a very well-crafted piece of verse indeed.

Colm plans to produce a book of his poems and songs as well as audio recordings and would like to get a regular slot on local radio in the South East and west to read and discuss his poetry and songs. This, he feels, is the best way to keep alive the tradition of ballad writing and poetry.

Finally, he returns nostalgically to the concerts his father would arrange in Bofield NS. This was where he heard Mariagh Howley sing in a classroom, lit by tilley lamps (in the days before rural electrification).

The stage in the corner of the classroom consisted of planks supported by Guinness barrels. It was there, he feels, the germ of a future impetus to compose was implanted.

In his time as a pupil in Bofield NS, ‘Question Time’ was a much-enjoyed part of the annual Winter concert. Years later, Colm wrote a short story based on the activity and the impression it left on him.

Finally, he tells this writer that the rambling house tradition is very strong in the South-East, particularly in counties Wexford, Wicklow and Carlow where it is called ‘House of Stories’. He is delighted to see that the tradition is being kept alive here in Mayo, in places like Kilmovee, Foxford and Swinford.

Long may Colm continue to enjoy success with his valuable work and enjoy the art of creativity and expression. Among his many compositions are The Wild Atlantic Way, Erris North Mayo, The Wellie Song and Boston Mass. This writer wishes to thank Colm for his time and knowledge, which he shares so willingly.