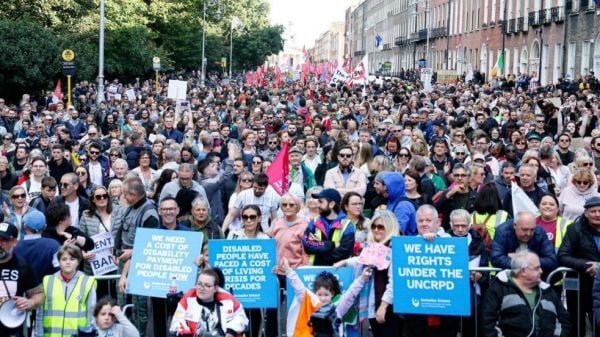 Thousands of people have taken to the streets in Dublin to protest against the cost-of-living crisis.

The demonstration, organised by the Cost Of Living Coalition, comes before the Government’s budget on Tuesday.

The group, made up of 30 organisations including trade unionists, student and pensioner bodies and opposition political parties, is urging the Government to take radical action on the cost-of-living and housing crises.

The march started at Parnell Square at 2.30pm and featured banners and chants including: “The cost of living is too damn high.”

It proceeded to O’Connell Street and College Green and finished in Merrion Square, where speeches were heard.

Sinn Féin leader Mary-Lou McDonald, a member of the coalition group, led a delegation from her party among the crowds.

She accused the Government of “not listening to ordinary people”.

Shouts from the crowd responded: “They don’t care.”

Ms McDonald called for rent to be reduced and a ban on rent rises for at least three years, as well as better funding for health care and disability services, and cuts to the cost of childcare by two thirds.

She said: “They need to do all of this and this needs to be done now, with a sense of urgency and a sense of purpose.”

The demonstration in Guildhall Square on Saturday afternoon was organised by the mayor of Derry City and Strabane, Sandra Duffy, to highlight what she termed the cost-of-living emergency.

“Workers, families, business in this town are struggling to pay their bills,” she said.

“We need action now. We need an Executive up and running so that all parties can work together to put money back in people’s pockets.”

Local trade union members as well as the Derry Against Fuel Poverty group were there.

House prices could drop by 12% if more homes are built, study suggests