As part of NUI Galway’s Autumn Conferring, which saw more than 1,700 graduates return to campus, the University recognised and celebrated one of the oldest graduates to have attended a conferring ceremony.

Frank Feely, a retired teacher and politician, completed a Bachelor of Arts in History, Irish and English in the late 1950s but did not have the opportunity to attend his graduation ceremony.

NUI Galway President, Professor Ciarán Ó hÓgartaigh welcomed Mr Feely back to campus and to the stage to be recognised and celebrated alongside his granddaughter Tara Savage, who was conferred with a Bachelor of Arts. 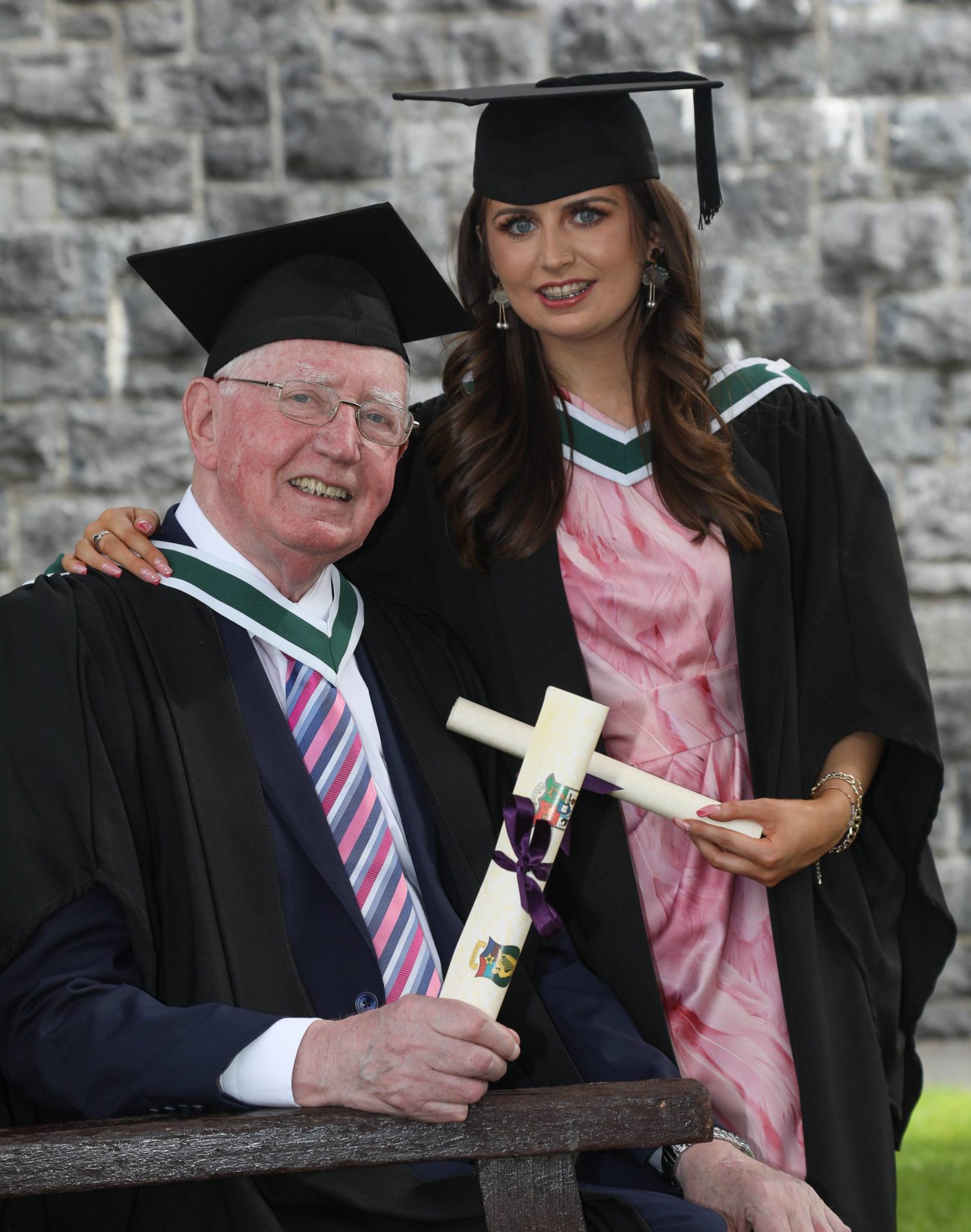 Professor Ó hÓgartaigh said: “All of us at the University are honoured to be able to recognise Frank Feely after all these years and in a special way on the day that his granddaughter Tara Savage is conferred. I am aware of Mr Feely’s regret at not being able to attend his own graduation ceremony with his classmates and it is a great delight that we got to play a small part in his celebration as he took to the stage with his granddaughter today.”

Born in Kiltimagh in 1937, Mr Feely was one of the youngest ever students to attend the University having commenced his studies in October 1955 aged 17. He earned a place after successfully completing the Matric Entrance Examination a year early as part of his studies as a boarder at St Nathy’s College, Ballaghaderreen.

Mr Feely secured a role as a teacher in St Colman’s College, Newry, within weeks of completing his degree and went on to be Head of History in the school. In 1968, Mr Feely became involved in politics and the Civil Rights Movement and the foundation of the SDLP, remained involved in politics being elected the First Mayor of Newry and also being part of negotiations for the Good Friday Agreement.

Mr Feely’s political endeavours for peace in the North have been acknowledged in an exhibition in the museum in his hometown of Kiltimagh.

Mr Feely said: “I am very happy and incredibly grateful to be able to share this wonderful occasion with my granddaughter Tara. I loved the ceremony and to see the large number of people there today. When I was here in the 1950s, there was only a few hundred students studying altogether, and most were male, but today about 70% were female so it’s fantastic to see the developments that have happened over the years.

“I would like to thank my family, the University and Tara for organising to allow me to come today and participate in the ceremony. It was well worth waiting over 60 years.” Tara said: “It has been a couple of months in the planning so it was great to be able to finally see it happen and to unveil the big surprise to him. It is such a special day, made even more special by being able to share it with granddad.”

Now aged 84, Mr Feely and his wife Ella still lives in Newry, where they raised their three children, daughter Noreen and sons Kieran and Niall.