How do you solve a problem like the Mayo junior football championship?

That is the question faced by a review panel, led by the Mayo GAA Competitions Control Committee (CCC), which will sit with representatives of clubs and divisional boards in early November to examine the format of the Exclusive Junior Championship and decide whether changes are required heading into 2023.

Delegates at last Thursday’s meeting of the Mayo County Board were informed of the upcoming review, with County Board vice-chair and CCC chairman Conn Moynihan laying out the issues facing the junior championship.

County Board chair Seamus Tuohy noted that this is the third year of a three-year trial period for the new championship format and added that it has always been the intention of the Board and the CCC to assess the successes and failures of the exclusive junior championship at this time.

To fill in the background, the Exclusive Junior Championship has existed since 2020. In late 2019, the County Board formalised significant changes to the existing junior championship, eliminating the B-teams of senior and intermediate clubs from the grade and moving those teams into an entirely separate set of competitions, called the Junior A, Junior B and Junior C championships.

Those championships were completed in early August this year, with Knockmore defeating Ballina in the Junior A final in Crossmolina. The revamp left 15 clubs to compete in the new Exclusive Junior Championship.

The changes in 2019 were made, at least in part, in response to Castlebar Mitchels B having won that year’s Junior A championship, the last staging of the competition under the old format. The changes were roundly supported by the clubs, who felt at the time as though junior clubs had a competitive disadvantage while playing against the B-teams of big senior clubs such Mitchels, Westport and Knockmore, who have far bigger picks of players.

The Exclusive Junior Championship has been a mixed bag. There have been some successes. Last year, for example, the competition produced the eventual Connacht and All-Ireland junior champions in Kilmeena.

The best game they got before the All-Ireland final was the county final against Cill Chomain, who are amongst the favourites to win the title this year.

The exceptional Kilmaine team of 2020 might well have competed for All-Ireland honours too, had that year’s provincial and All-Ireland club championships not been cancelled due to Covid.

But there are also several obvious issues with the structure of the junior championship. 15 teams is an awkward number to begin with, necessitating one three-team group in the championship; Killala will be the unlucky party this weekend, having to watch on helplessly as their fate is decided in the game between Kilmovee and Islandeady.

But a far more significant issue is the imbalance between the top teams and the bottom teams in the Exclusive Junior Championship. The last three years have seen some incredibly lop-sided games played in the competition. In 2021, infamously, Kilmovee beat Lacken by a full 50 points in a Round 1 game. 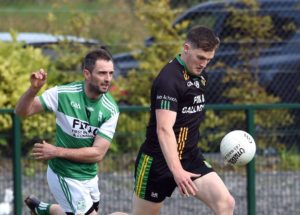 Mayo footballer James Carr in action for Ardagh against Ballycroy’s Tom McIntyre during the opening round of this season’s Mayo Exclusive Junior Championship earlier this month. Picture: David Farrell Photography

This year’s championship has only seen that trend accelerate. Already this year, there have been games in the Exclusive Junior Championship decided by margins of 39 points, 23 points, 18 points and 16 points.

13 games have been played in the championship so far, and six of those have been won by margins of 11 points or more.

We would quite probably be dealing with a round 50 percent rate of double-digit wins had Kilfian not conceded their Round 1 game to Swinford.

Lop-sided games happen in the higher ranks too – Westport beat The Neale by 29 points in Round 1 of the senior championship, for example – but they don’t occur with anything like the same frequency as they do at the junior grade.

Getting hammered, and knowing in your heart of hearts that there are likely more hammerings to come, is a deeply demoralising experience for footballers. The inevitable consequence is that players simply stop playing.

This has already been borne out. Lacken withdrew from the 2021 championship after that 50-point loss. Kilfian held a club meeting the week after they conceded their Round 1 match to Swinford earlier this month, with the entire future of the club in question. It was to their credit that they regrouped to field a team against Ardagh in Round 2.

The remit of this review will naturally overlap with the simultaneous review being carried out by the County Board into the demographics within Mayo clubs, being headed by Michael McKenzie and Paul McNamara.

This demographics committee aims to have a document prepared by late October outlining the specific issues being faced by clubs in regards to decreasing playing numbers and setting out its recommendations for how these issues might be addressed.

For some clubs at the junior grade, simply fielding an adult team is a huge challenge in and of itself. The prospect of seriously competing with the stronger clubs such as Cill Chomain, Shrule/Glencorrib or Swinford is almost out of the question.

Clubs like Lacken, Kilfian and Moygownagh are the ones we tend to think of when this issue is raised but plenty more clubs are feeling the squeeze too. The likes of Ballycroy, Kilmovee and Ballycastle are all operating with tight numbers at adult level.

The demographics review will hopefully reveal the exact nature of the issues facing these small clubs, although the recommendations it can provide to solve the problems may be limited. Frankly, you can’t wave a magic wand and make young men appear out of thin air.

‘Amalgamation’ may be viewed by some as a dirty word but with every passing year, it feels more and more inevitable that certain clubs will need to band together to survive.

On the other side of the coin, we have to consider the position of the big clubs who were essentially kicked out of the Exclusive Junior Championships three years ago. Westport delegate Seamus Moran made the very reasonable point that a sizable proportion of their adult players (i.e. those not included on the senior panel) have had no football whatsoever since the Senior Leagues finished up in August.

The same no doubt applies across most senior clubs with big playing numbers. Is it fair that those players, who have paid their memberships, have no football while the weather is still good in September and October?

These are the questions the review committee will need to wrestle with over the coming weeks. Unfortunately, there is no silver bullet here.

The option of reverting to the old model and allowing B-teams to compete against junior clubs does have some advantages.

That would likely see the weaker clubs drop down to the old Junior B grade, with promotion and relegation between the two.

But we would still face the question of competitive fairness, and whether it’s right to allow big senior clubs to enter B-teams to play and quite possibly win at the junior grade.

It would stop a lot of the one-sided games, if nothing else. And clubs could still achieve promotion from B to A in a given year.

The Exclusive Junior B Championship already exists, after all, for the seven teams who fail to progress from their groups. But it is a competition that has barely registered in its three years in existence.

The Exclusive Junior Championship was a noble experiment, but changes are needed.