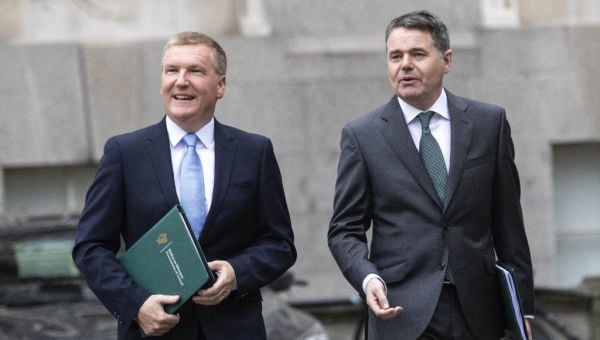 Dubbed the “cost-of-living budget”, Tuesday will see Minister for Finance Paschal Donohoe and Minister for Public Expenditure Michael McGrath pull back the curtains on Budget 2023.

The €6.7 billion budget – which includes a €1.05 billion tax package and €5.65 billion of expenditure – will be unveiled alongside a once-off cost-of-living package which will not be including in the budget figures, but is reportedly worth in the region of €2 billion.

Government leaders have said the upcoming budget and cost-of-living package will aim to help households “as best we can”, paying particular regard to inflation, soaring energy prices and housing.

Broadly, Taoiseach Micheál Martin said the Government is “looking at families and children in particular”, while the Coalition is aiming to “allocate as much as we possibly can” in terms of supports which will be rolled out before the end of 2022.

The Government must tread carefully however, as a misstep could further exasperate inflation.

Here’s everything we know about Budget 2023 so far:

The Government is examining ways to introduce a windfall tax for energy companies reporting soaring profits, the takings of which will be used to reduce energy bills for households and businesses.

This method may also be used for ESB, which reported a post-tax profit of €390 million for the first half of the year last Friday, as accessing the funds via a windfall tax would likely be quicker than waiting for it in the form of the State’s dividend.

The European Commission proposed levies for energy companies last week, however, Tánaiste Leo Varadkar admitted the plan was “not entirely clear” adding that the Government needed to “figure them out, ideally, before budget day”.

Although plans have not yet been finalised, it is believed the Government will stick to the approach of an energy credit rather than attempting to impose energy price caps as the UK has done.

The credit for households, similar to the €200 payment rolled out earlier this year, is expected to be in the region of €200-€250, with Mr McGrath saying he expects it will be paid in the first quarter of 2023.

It is also likely the Government will extend the Fuel Allowance to help those at risk of fuel poverty to get through the winter.

However, a flat-rate approach similar to what is expected for households, where everyone receives the same amount, is not thought to be the best system for businesses due to the factors impacting their energy requirements, such as the size of the business and their industry.

It is also understood that the Government wants to aim these supports at businesses that need them most, avoiding large multinational organisations which are less likely to be struggling to pay the bills.

The Tánaiste has hinted the Coalition is considering the reintroduction of wage subsidy and business support schemes, similar to what was rolled out during the pandemic, as a “worst-case scenario”.

The special reduced VAT rate for the hospitality sector is expected to be axed, with the rate likely returning to 13.5 per cent.

A new Tourist Tax, which was recommended by Commission on Taxation in its report published last week, may be on the table, but Mr Varadkar said a decision on such a charge should be left up to local authorities.

A VAT cut on electricity and gas, which reduced the rate from 13.5 per cent down to 9 per cent, is also expected to be extended. The Government announced the measure earlier this year, beginning at the start of May, and it had been due to end at the end of October.

Another recommendation of the Commission on Taxation was lowering the tax-free inheritance threshold, but such a move is very unlikely given Mr Varadkar said there was “no way” a Fine Gael government would increase inheritance tax or tax on savings.

The Taoiseach also seems against such a change, stating there was “no appetite” to reduce the threshold, adding it would disadvantage families.

Having signed up to the OECD’s international tax agreement last year, the State’s corporate tax rate will soon be out of the Minister for Finance’s hands, at least for the top earning multinational companies.

The addition of a new tax band for income tax had been floated in order to assist the so-called ‘squeezed middle’ – middle-income earners who are paying more tax because they have crossed the threshold into the higher tax band by a small margin.

There seems to be strong Fine Gael support for such a measure, however, many have said the move would add more complexity to a taxation system which is in need of simplification, as well as eating in to the €1.05 billion tax package.

A more likely alternative to help middle-income earners is the expansion of the lower tax bracket.

Currently, annual income above €36,800 qualifies for the 40 per cent rate, but it is expected this threshold will be increased to €39,000, meaning workers can earn an extra €2,200 which will be taxed at the lower rate (currently 20 per cent).

Despite the cost-of-living crisis, it is thought the carbon tax rate will be increased in the budget.

The Government has said it will continue to focus on housing in the upcoming budget, with the Help-to-Buy scheme being one of areas under consideration.

The scheme, which seeks to help first-time buyers in raising a deposit by refunding four-years worth of income tax and Deposit Interest Retention Tax (DIRT), was due to be wound up at the end of the year.

While the Commission on Taxation recommended that the scheme should end as planned, Mr Varadkar again disagreed, spelling hope that the initiative will be extended into 2023.

The two big spenders – the Department of Health and Department of Social Protection – had not finalised their allocations as of Friday, with a number of changes likely to assist lower-income households struggling with the cost-of-living crisis.

Unsurprisingly, the welfare package is expected to be ramped up, which a double payment this side of Christmas and a Christmas bonus likely to be on the cards.

The living alone allowance, currently set at €22 a week, is also expected be increased to help adults who do not have another income-earner to assist with paying bills.

Rumours of a €15 increase in the weekly State pension payment is thought to be off the table, replaced instead by a €10 increase.

Following the announcement by Minister for Social Protection Heather Humphreys that the State pension age is to remain at 66, it is understood that Pay Related Social Insurance (PRSI) contributions will have to increase into the future to cover the cost. However, no indication was given as to when these increases are likely begin, so current rates may well remain unchanged in Budget 2023.

Meanwhile, the Department of Health is thought to be seeking the abolishment of €80 per day hospital charges for adults (up to €800 per year).

To cover the cost of rising energy prices, schools will receive extra capitation funding to cover heating and lighting expenses.

It is also understood that Minister for Education Norma Foley has sought funding to reduce the student-teacher ratio.

The Taoiseach has highlighted childcare as an area the Government wishes to focus, hinting at a major spend in Budget 2023.

Having provided funding aimed at childcare workers and providers in previous years, Mr Martin said the upcoming budget will instead look at improving affordability for parents and guardians.

According to the Irish Examiner, a Green Party source said there is little resistance in Government to a cut in childcare fees of around €200 per child per month.

The 20 per cent reduction in public transport fares announced earlier this year is expected to be extended with a view of making it permanent.

There are also indications the Government will extend the current 9 per cent excise duty cuts on petrol and diesel, which are due to expire at the end of this year, for another six months to help offset soaring fuel costs for motorists.