During a business trip to Ireland in 1986 a fortunate twist of fate landed Jim O’Brien in a Dublin pub showing an American football game. Irish people had begun to be sucked into the sport but coverage on these shores was still in its infancy. That said, the Irish were clearly curious. And so that became the subject of one of the conversations O’Brien had with his friends as they suckled down their pints of Guinness while watching the television.

One of his friends even piped up with the suggestion: “Why don’t you bring a game over to Dublin sometime?” Naturally, the idea was dismissed. It was hardly even discussed. But an idea had spawned — even if O’Brien had yet to realise it.

Two years later, Boston College, O’Brien’s alma mater, were travelling to Dublin to take on Navy at Lansdowne Road, bringing the whole pageantry that goes with the sport for a spectacle Dublin had never before witnessed. O’Brien was the main architect of it all. 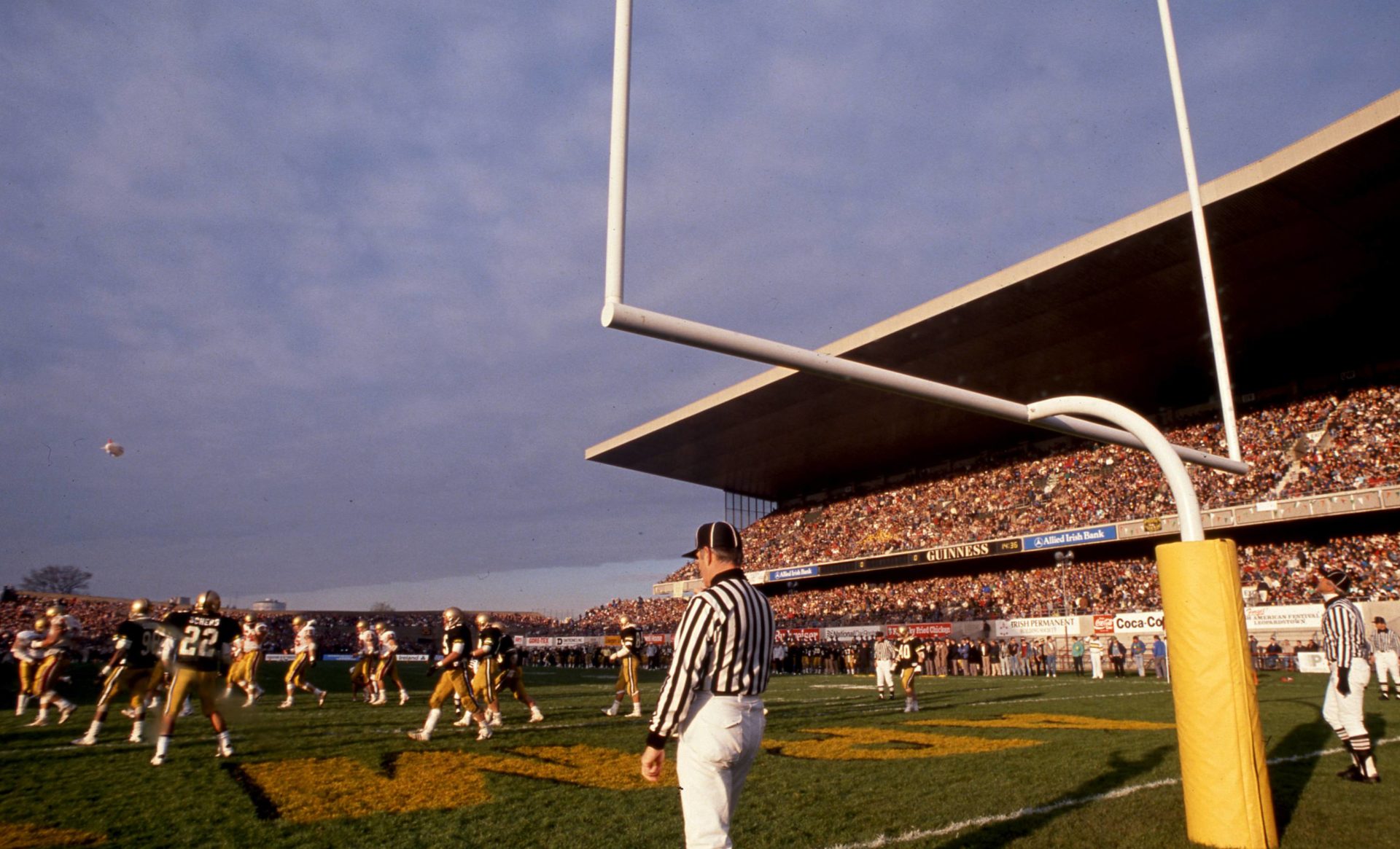 O’Brien was well respected at Boston College, having played as a tackle for the college’s football team before he was drafted by the Detroit Lions in 1960. He also played with the Oakland Raiders during a short NFL career that was cut short by injuries. However, despite his misfortune with injuries throughout his professional career, he was still held in high regard at the famed Massachusetts university. So, when he came to Bill Flynn, Boston College’s athletic director, with the madcap idea of bringing a college football game and all that goes with it to Ireland, he wasn’t immediately dismissed like some others may have been. He was allowed to expand on his vision and explore all possibilities.

The Navy Midshipmen were touted as a possible opponent for what became billed as the Emerald Isle Classic, but obstacles still remained, not least the issue of bringing the football team overseas to a country that wasn’t in Nato. But those behind the idea had been whispering in the corridors of power and Navy were eventually given the go-ahead to travel across the Atlantic. After lengthy discussions, Tip O’Neill, speaker of the United States House of Representatives, eventually interjected to sort out the dilemma. The Pentagon gave the game its blessing.

The game itself was a resounding success. 15,000 Americans made the journey to the South Dublin venue and, helped by a healthy cohort of curious Irish spectators, ensured the stadium had run out of beer before the teams headed for the locker rooms at half-time.

More than 42,000 turned up to Lansdowne Road, with thousands more following the next year and throughout the 1990s. The hunger for gridiron wasn’t abating.

“Seldom does a day or a week go by that somebody doesn’t mention it,” O’Brien told The Lowell Sun a couple of years back. “It’s nice to be able to sustain that memory. You can only do something for the first time once.”

Over the last decade the bug has hit once again, with the recent game between Nebraska Cornhuskers and Northwestern Wildcats being the first of the five-game series in Dublin. Dublin is thus becoming a home away from home for college football.

Similar to the very first game back in 1988, there were beer-related issues at this year’s game — though fans won’t have too many complaints about receiving free beer as a result of some dodgy broadband shutting down cash tills. Those beery scenes of fans stocking up with trays of beer, with some stacking empty beer cups high enough to reach the second tier, were broadcast right across America to almost 4.5m people nationwide. On the one hand, dodgy broadband could portray an air of incompetency. On the other hand, the bizarre situation bolstered Ireland’s reputation for hospitality overseas. The land of a thousand welcomes and unpredictable technology.

By and large, the feedback from the opposite side of the Atlantic was positive. Dublin was a carnival of red and purple as fans of both Nebraska and Northwestern flew into the Irish capital for the occasion. And both teams bought into the experience while Irish sports fans continued to embrace the exuberant manner in which America goes about sport.

Meanwhile, the NFL is attempting to expand to foster a more global appeal. The International Home Marketing Areas (IHMA) initiative, launched in January of this year, has allowed NFL teams to access international territories for marketing, fan engagement and commercialisation in a bid to grow the game and their brands around the world.

Moreover, once again this season will see three NFL games take place in London —two at Tottenham Hotspur Stadium and one at Wembley. Mexico will also host a game again at the Estadio Azteca and for the first time the league will head to Germany for a game at the Allianz Arena in Munich.

Furthermore, as every year passes, the possibility of a European franchise setting up in London edges closer. There are of course numerous hurdles to overcome but billionaire owners tend to get what they desire once they put their minds to it.

So where does that leave Ireland in the future of the game? No NFL team has begun marketing in Ireland yet but given the success of recent college football games it may not be long before a few teams come knocking.

Speaking ahead of the recent game in Dublin, former NFL player Jason Bell said: “I don’t know why it hasn’t happened already. When you look at the NFL and American football fans in Ireland, it only makes sense. Starting off and dominating this realm of college sports is the key.”

The prospect of the country hosting NFL games remains exceptionally unlikely for now, certainly within the next decade, but with NFL stakeholders so keen on growing the game globally, anything is possible.

If O’Brien went from dismissing a harmless comment over a few pints to bringing college football to Ireland within only two years, is any scenario truly off limits?