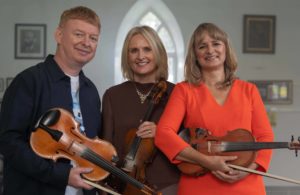 The fourth series explores six famous Irish musical families who have brought their music to the four corners of the world. The series gives an insight into the musical journey that each family has taken and the influence of previous generations on their family’s musical heritage.

The series begins with The Smyth siblings Seán, Cora and Breda who grew up in Straide surrounded by a strong family tradition of Irish music and during this time they collectively won over 50 All-Ireland titles. They each graduated in medicine while participating in the exciting music scene in Galway during their studies at UCG. 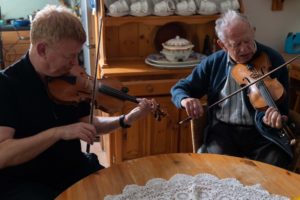 The recently deceased TJ Smyth from Straide enjoying a tune with his son Sean.

Lúnasa super group founder Sean Smyth’s 1993 solo debut, ‘The Blue Fiddle’, was named one of the year’s ten best albums by The Irish Echo. Breda has presented programmes for TG4 and RTÉ and her debut album earned her a nomination as Best Female Artist at the 2003 Irish Music Magazine Awards. She as recently has been named as Ireland’s interim Chief Medical Officer. Cora’s professional career started when she performed with The Druid Theatre and she then played violin on the Eurovision winning ‘The Voice’ and subsequently toured the world with Michael Flatley’s Lord of the Dance.

The programme will be broadcast at 10.30pm this Sunday night. The series is narrated by Pádraigín Ní Uallacháin.