Arrest made after major drug find on Friday

A file is to be prepared for the Director of Public Prosecutions following the arrest of a man in Tuam on Friday after Gardaí seized cocaine with a value of €60,000. 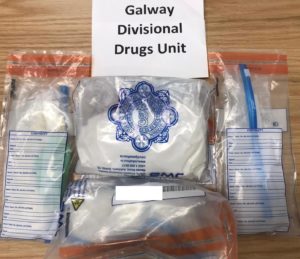 Gardaí have released a photograph of the drugs seized in Tuam on Friday afternoon.

As part of Operation Tara, Gardaí attached to the Galway Divisional Drugs Unit carried out a search under warrant at a domestic residence during Friday afternoon and seized the cocaine along with drug paraphernalia.
A man, aged in his 30s, was later detained under Section 2 of the Criminal Justice (Drug Trafficking) Act 1996 at the North Western Regional HQ. He was later released without charge and a file will now be prepared for the DPP.

The drugs seized will be sent to undergo further analysis and the investigation is ongoing.