The aftermath of Collins’ death in Mayo

The following is a selection of edited reports from the Western People’s editions of August 26 and September 3 in the aftermath of the death of Michael Collins. 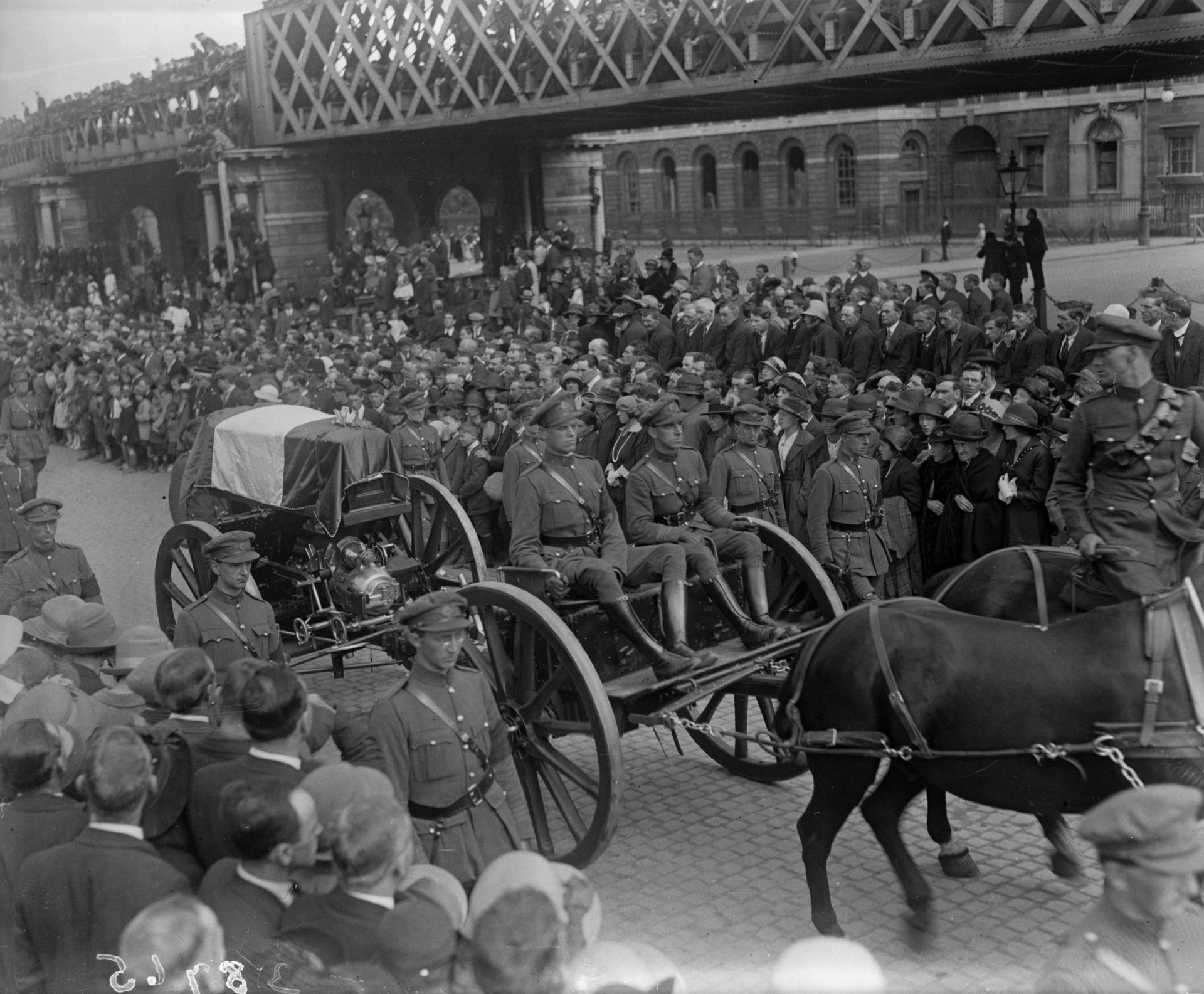 The coffin of Michael Collins being driven through the streets of Dublin with a guard of honour on August 28, 1922. Picture: Walshe/Topical Press Agency/Getty Images

When news of General Collins’ death reached Swinford, there was widespread mourning. All business was suspended, and the business houses were closed as a mark of respect in his memory.

The directors of the Swinford Town Hall held a meeting, at which a resolution was unanimously adopted, placing on record their sense of the great loss suffered by the country through his death, and tendering to Mrs Sheridan, of Bohola, sister to General Collins, and the other members of the family, the sincere sympathy of the people of Swinford in their bereavement.

Brigadier Murphy was present at the meeting and desired, on behalf of the East Mayo Brigade, to associate himself with the people of Swinford in their expressions of sorrow at the loss of Ireland’s noblest soldier.

The Ratepayers’ and Traders’ Protection Associations also passed resolutions of sympathy and decided to keep their business premises closed until General Collins was buried with Ireland’s martyred dead.

Ballina manifested the grief at the tragic death of General Collins by a complete stoppage of business on Monday until 12 o’clock noon, when, after the ceremonies in connection with the occasion were observed, the business premises in the town were again opened.

At 10.45am, the National troops lined up in Knox Street, and accompanied by the massed bands of the Moy Branch of the Foresters and Ballina Hibernian Society, marched to the Cathedral. The troops were in charge of Staff Lieutenant Cox. The members of the Foresters’ Society, wearing their armlets, also marched in the procession.

The High Mass de Requiem was attended by an enormous congregation. The Cathedral was filled to the door. Subsequent to the celebration of the High Mass, the troops lined up outside the Cathedral. Headed by the massed bands, this time with muffled drums, and playing Chopin’s ‘Funeral March’, the sad procession marched slowly through Bridge Street, Hill Street, by the railway station, through Francis Street, King Street, Knox Street, and onto Barrack Hill, large crowds of people following. The firing party marched with arms reversed. In Barrack Hill, three volleys were fired and the Last Post sounded.

As a tribute of respect to the memory of the Commander-in-Chief, General Michael Collins, Monday was observed in Claremorris as a general holiday, and all business was suspended throughout the entire day. At 11 o’clock, Solemn Requiem Mass was celebrated for the eternal repose of his soul. In the body of the church, there was an exceedingly large congregation, both town and country being well represented.

The Rev Father Diskin, in seeking the prayers of the congregation for their distinguished leader, exhorted the people to continue to a finish the great work to which he had devoted and sacrificed his life, and his death would not have been in vain.

The congregation was deeply moved, and fervent prayers were offered up for the eternal repose of the soul of the illustrious dead and the late President Mr Arthur Griffith.

After the Mass, the military and civilian population formed up in processional order and marched through the streets.

The National flag, covered with mourning, was borne in front by two officers, followed by an armoured car draped in black, the firing squad on their side with rifles reversed, the guard of honour and the general public.

On their return to the Square, the military lined up. The guard of honour stood to attention and the firing squad discharged three volleys. The ceremony was most impressive and concluded with the sounding of The Last Post.

The Claremorris Sinn Féin Club adopted a resolution of regret at the Commander in Chief’s death and appointed two delegates to attend the funeral.

A special meeting of the Castlebar Urban Council was held in the Courthouse for the purpose of placing on record the council’s deep regret at the demise of General Michael Collins, and to appoint representatives to attend the obsequies.

The chairman, Dr Anthony MacBride, moved: “That we have learned with feelings of horror and consternation of the death of General Michael Collins, a noble patriot, a gifted and brilliant Irishman, a brave and fearless soldier, and a far-seeing statesman, but above all one who was at any time prepared to sacrifice his very all for the faith that was in him to win for his native land that freedom to which he devoted the greater part of his young life.

“We tender to his bereaved family, to the Irish Government, and the people of Ireland our deep and sincere sympathy on the great loss all have sustained by the death of General Michael Collins under such tragic circumstances in his native county.

“That as a mark of respect to his memory we adjourn this meeting and direct our clerk to forward copies of this resolution to the immediate relatives of General Collins and to Mr W.T. Cosgrave, T.D.”