The curious tale of Mayo’s gift to Michael Collins

In July 1922, Foxford Woollen Mills was forced to close for the first time in its 30-year history after the railway bridge over Lough Cullen was blown up by anti-Treaty forces who were trying to prevent National Army troops from reaching Ballina. The Woollen Mills was totally dependent on the railway for the transportation of its goods, so the Mills’ founder Cork-born Mother Morrogh Bernard was left with little choice but to cease work. It was a devastating blow for the 200 or so workers who depended on the woollen mills for their livelihoods. 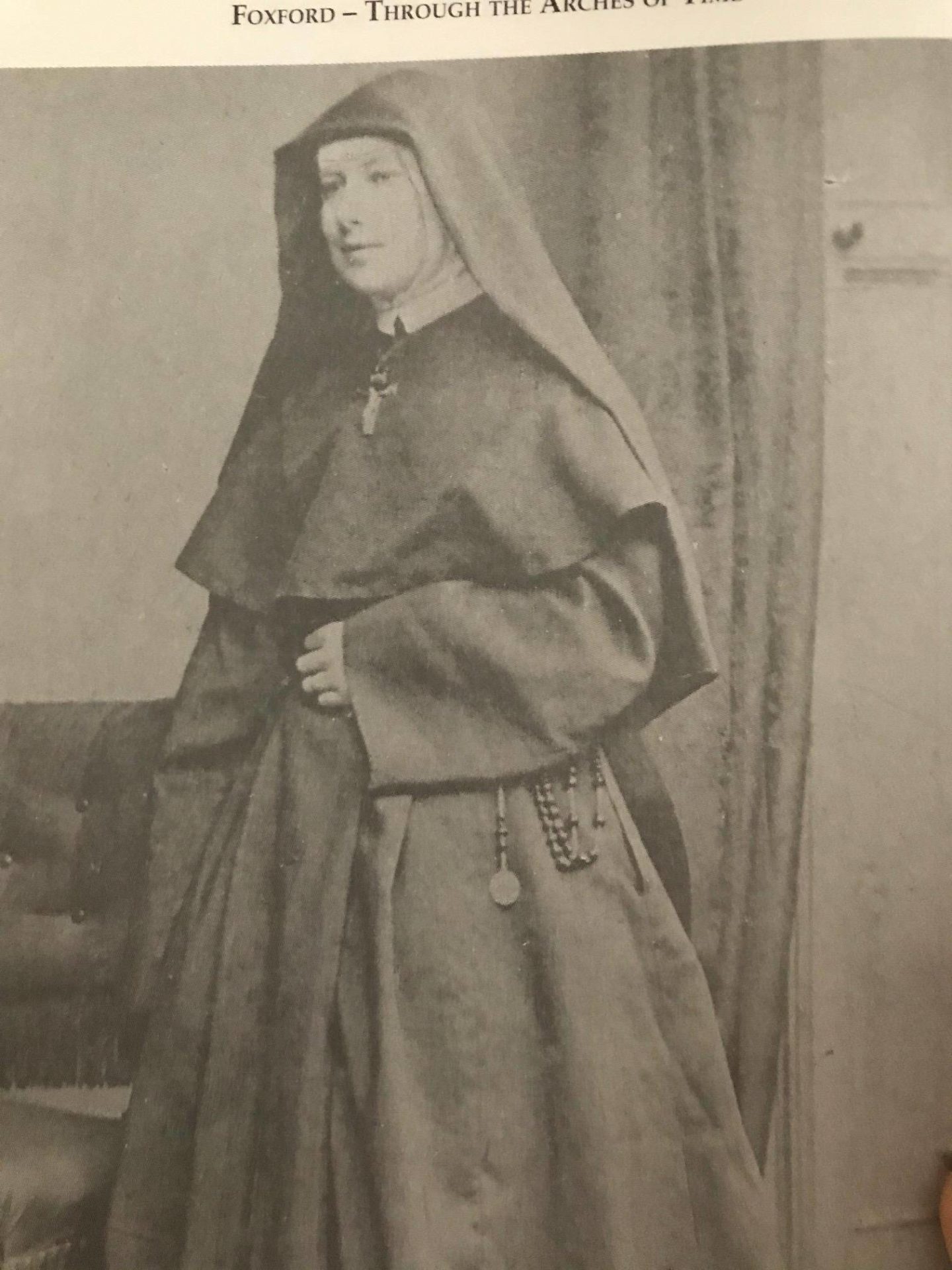 Mother Morrogh Bernard had the rug manufactured for Collins in August 1922.

Only a small group of staff were retained during the six-week closure to complete an order of woollen goods for the Dublin market… and to manufacture a very special gift for General Michael Collins, which today is known as ‘The Collins Rug’.

The rug was a once-off job, made from pure, unprocessed wool and woven in an intricate pattern of green, white and gold, the national colours. Known as a ‘knee rug’, it was typical of the kind used in pony traps and motorcars in the early 20th century.

The rug was designed by Scottish-born Tom Turnbull, the designer at the Woollen Mills, and completed in early August. It was part of a larger consignment of goods sent to the capital by the Woollen Mills and was packaged separately, with no identification label, and addressed simply to ‘Michael Collins, c/o Dublin Castle’. 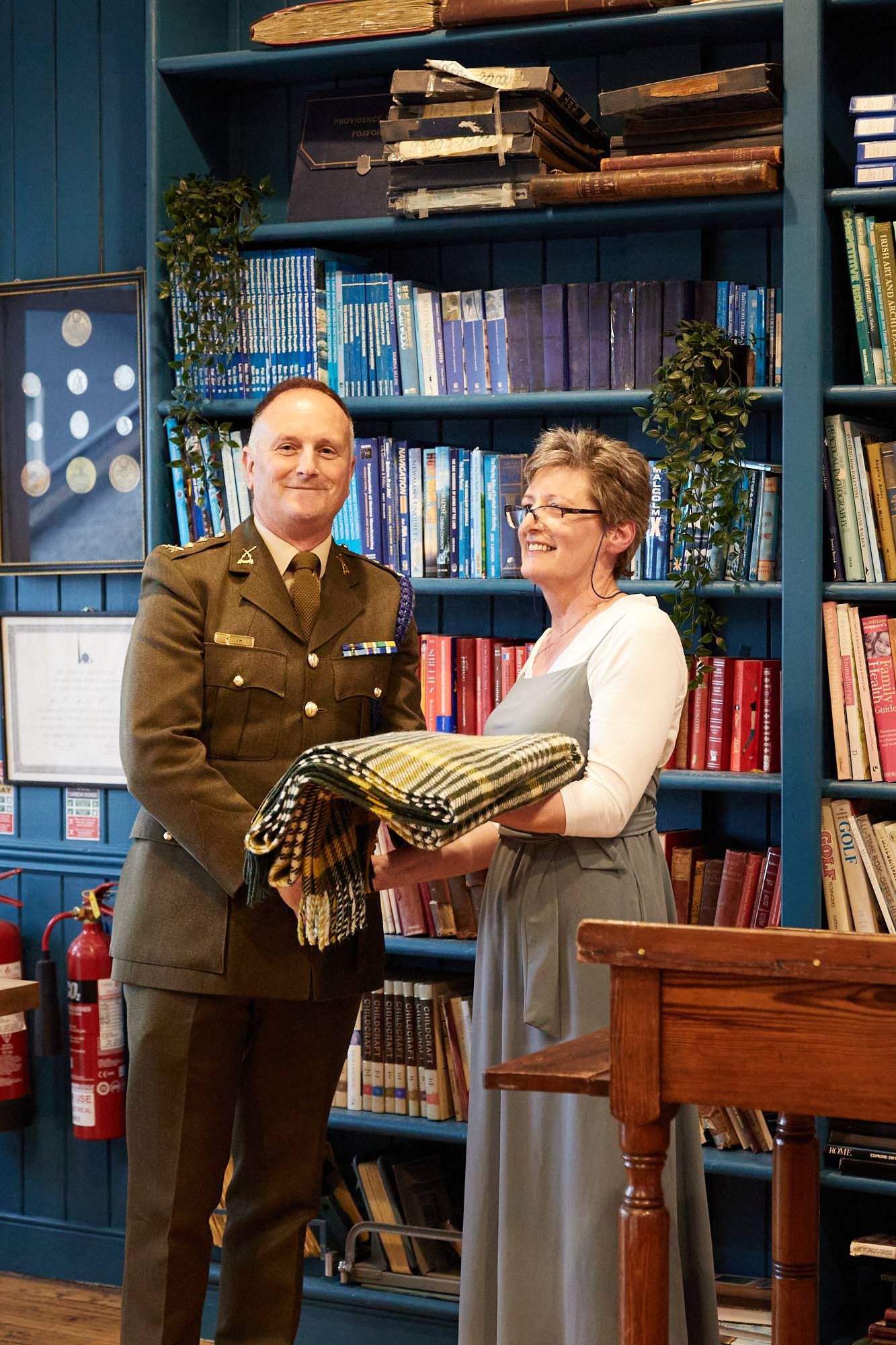 Colonel Caimin Keogh of the Irish Defence Forces receives a Collins’ replica rug at a ceremony in Foxford Woollen Mills earlier this year.

Mother Morrogh Bernard had a particular reason for wanting to send this humble gift to her fellow Corkonian. In 1921, she formulated plans for extending the mills and building a new chapel on the convent grounds, but she was restrained by both civil and religious authorities. However, shortly after the signing of the Anglo-Irish Treaty on December 6, 1921, she suddenly and unaccountably got complete clearance for her plans, by and by the spring of 1922 was already in the process of commencing work on the building scheme.

She was convinced that only one man could have been responsible for the swift change in fortune. After signing the Treaty, Collins made it clear he intended to instigate a new era of industrialisation in Ireland, and his words were music to the ears of Mother Morrogh Bernard who made the rug as a gesture of gratitude to Collins for his support.

The Commander-in-Chief took the rug with him on his ill-fated tour of Munster in August 1922, and it was with him at Beal na mBláth. In the early hours of Tuesday, August 23, Nora O’Donoghue, a young nurse from Waterville in Co Kerry, was on duty at Shankiel Hospital in Cork City when the body of Michael Collins was delivered in the Sliabh na mBan armoured car. A bloodstained carriage rug was handed over with the body.

The matron, Eleanor Gordon, told the young nurse to take the rug away and wash it. Instead, Nora kept it in her possession, and later that year, brought it with her to England where she was starting a new job. She spent the next 40 years working in England as an army nurse.

In 1965, while attending a political rally in Killarney, Nora put the rug into the hands of a Cork solicitor, Brendan O’Connell for safe-keeping.

Twenty-five years later, Mr O’Connell presented the remarkable artifact to Patrick Twohig, who was then writing his famous book on the life and death of Michael Collins. The rug carried no identification marks but Twohig traced it to Foxford Woollen Mills. Later in 1990, Twohig brought the rug to Foxford and interviewed several locals, including the late Mary Molloy, of Summerhill, who had actually helped to manufacture it all those years ago.

Twohig subsequently presented the rug to the National Museum, but it mysteriously disappeared and has never been seen since.