When Erris-based Fine Gael councillor Gerry Coyle and party colleague Deputy Michael Ring stood beside the Sliabh na mBan armoured car in Geesala in the summer of 2018 they never realised there was a connection between their families going all the way back to the foundation of the State. The Sliabh na mBan was, of course, the armoured car that accompanied Michael Collins on his fateful journey to West Cork in August 1922 and it carried his body from the scene at Beal na mBláth to Cork City.

Gerry Coyle and Michael Ring both knew of their respective families’ involvement in the War of Independence and Civil War, but neither realised that their ancestors’ paths had crossed when Michael Collins visited Castlebar in April 1922. Gerry’s father Henry (also known as ‘Harry’) was heavily involved in arms smuggling from Scotland throughout the War of Independence and was the IRA’s Director of Purchasing in Glasgow for a period until he was arrested in December 1920 with the largest consignment of gelignite discovered in Britain up to that point. Coyle’s arrest was a big blow to the IRA and Collins alludes to that fact in a letter in March 1921 in which he bemoans the lack of weapons from Scotland since the Erris man was detained. Coyle stood trial in both Liverpool and Glasgow before spending a year in the notorious Peterhead Prison in northern Scotland until he was released under the terms of the Anglo-Irish Treaty in February 1922. 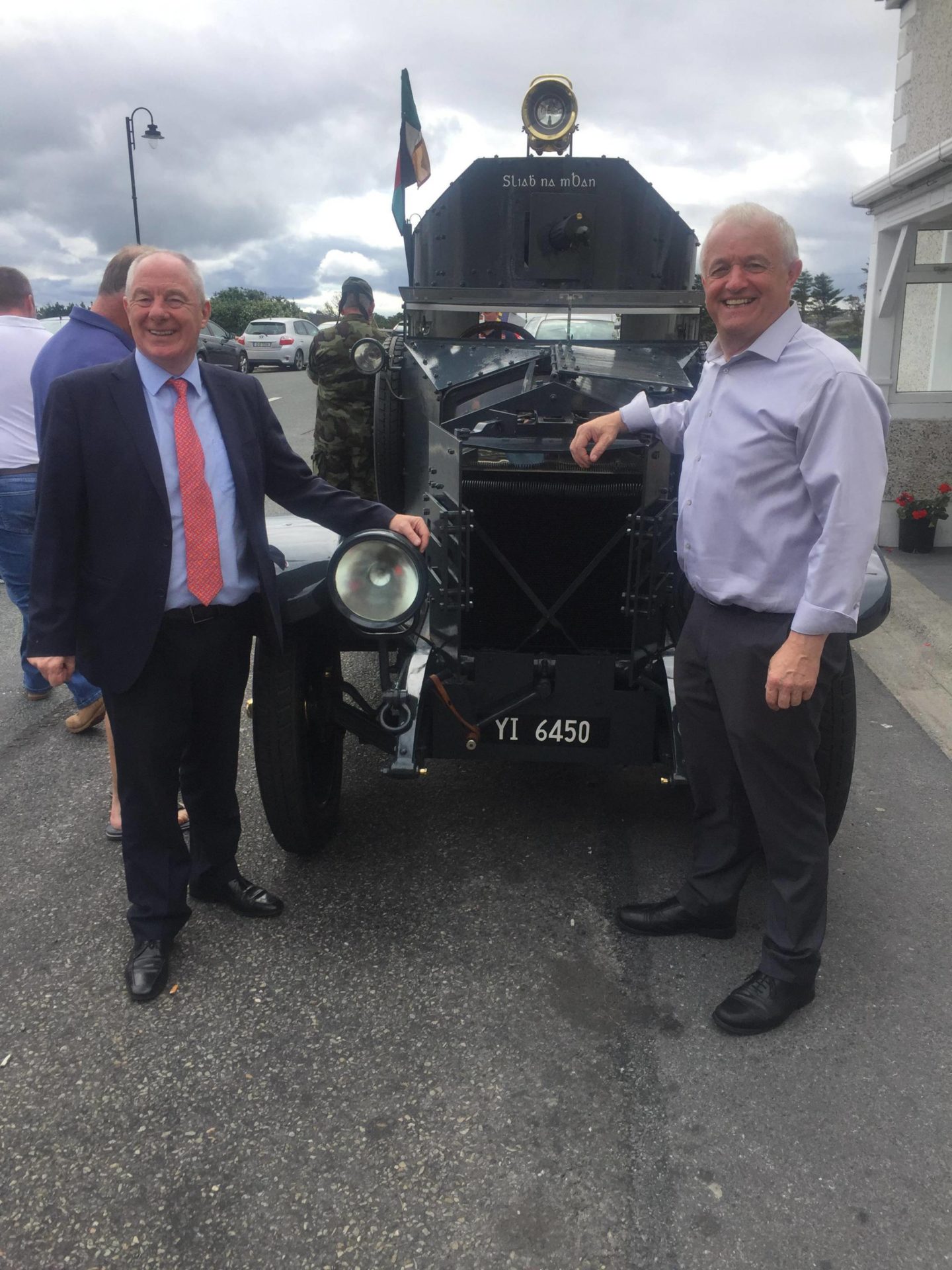 Michael Ring and Gerry Coyle pictured with the Sliabh na mBan armoured car in Geesala in 2018.

Back in Mayo, Michael Ring’s granduncle, Joe Ring, from Westport, was a prominent member of the West Mayo IRA Brigade and was credited with establishing the first flying column in Ireland. He played a distinguished part in the War of Independence and was close to Collins, having first met the Cork man in Frongoch internment camp in Wales in the aftermath of the Easter Rising.

Ring was one of the few prominent leaders of the IRA in Mayo who took the pro-Treaty side and he was instrumental in the establishment of the Civic Guard, alongside another old friend from Frongoch and Newport native Michael Staines. In March 1922, Ring returned to Mayo to commence recruitment for the Civic Guard and established an office in his native Westport. He immediately encountered resistance from his old comrades in the West Mayo IRA Brigade, but they stopped short of arresting him.

Meanwhile, Henry Coyle had returned to Ireland following his release from Peterhead Prison and immediately enlisted in the IRA, making it clear that he supported the Treaty and, more particularly, Collins, for whom he had enormous respect. He was sent to Mayo to see if he could persuade some of the IRA members in the county to throw in their lot with the provisional government. It was a fairly hopeless task and Coyle was promptly arrested, although the anti-Treaty leader in the county, Michael Kilroy, had mixed feelings about detaining the Erris man.

“We were very fond of ‘Harry’ Coyle,” Kilroy told Ernie O’Malley, “but we locked him up!”

Coyle is reputed to have told Kilroy that he was being arrested with the very guns he sent from Scotland!

Within days, Ring was also arrested, and both men were detained in the military barracks in Castlebar, which the British had evacuated just weeks earlier. On Sunday, April 2, the day after Ring’s arrest, Michael Collins came to Castlebar for a pro-Treaty rally at the Mall. Collins stayed in the Imperial Hotel that night and the following morning he called to the barracks to visit Ring and Coyle, as well as Charles Byrne, one of his own security personnel, who had been arrested the night before. The meeting with the two Mayo men was permitted, but Collins was not allowed to visit Byrne.

After Collins left, Ring, Coyle and Byrne all went on hunger strike in an attempt to secure their release. Ring also issued a public statement addressed to his old comrade Kilroy:

As Commandant of 3rd Battalion, West Mayo Brigade, I stand loyal to the oath I took to the Republic, which is Dáil Éireann. As such I hold I have a perfect right to my opinion, and any action I have taken or may take, I am responsible to that Government and none other.

Being loyal to my oath and the Government I took it to, I hold you have no legal right to arrest or detain me, as you are no longer recognised as an officer acting for the official General Headquarters of the IRA.

Coyle and Byrne were released within days but Ring remained on hunger strike until he was released into the care of the County Infirmary on the following Friday. Ring and Coyle both served in the National Army during the subsequent Civil War, and the Westport man was tragically killed in an ambush in Bonniconlon in September 1922.

Gerry Coyle and Michael Ring have been close friends and political allies for the past 25 years, but neither man knew anything about their century-old family ties until Gerry started researching his father’s life and uncovered various newspaper reports and other documents that confirmed the link. Gerry is publishing a book about his father later this year and it promises to be a fascinating read.

North Mayo co-operative made great strides in past year