Cheers, jeers and gunshots during Collins’ final visit to Mayo

On April 2, 1922, Michael Collins came to Castlebar for a major rally in support of the Treaty. 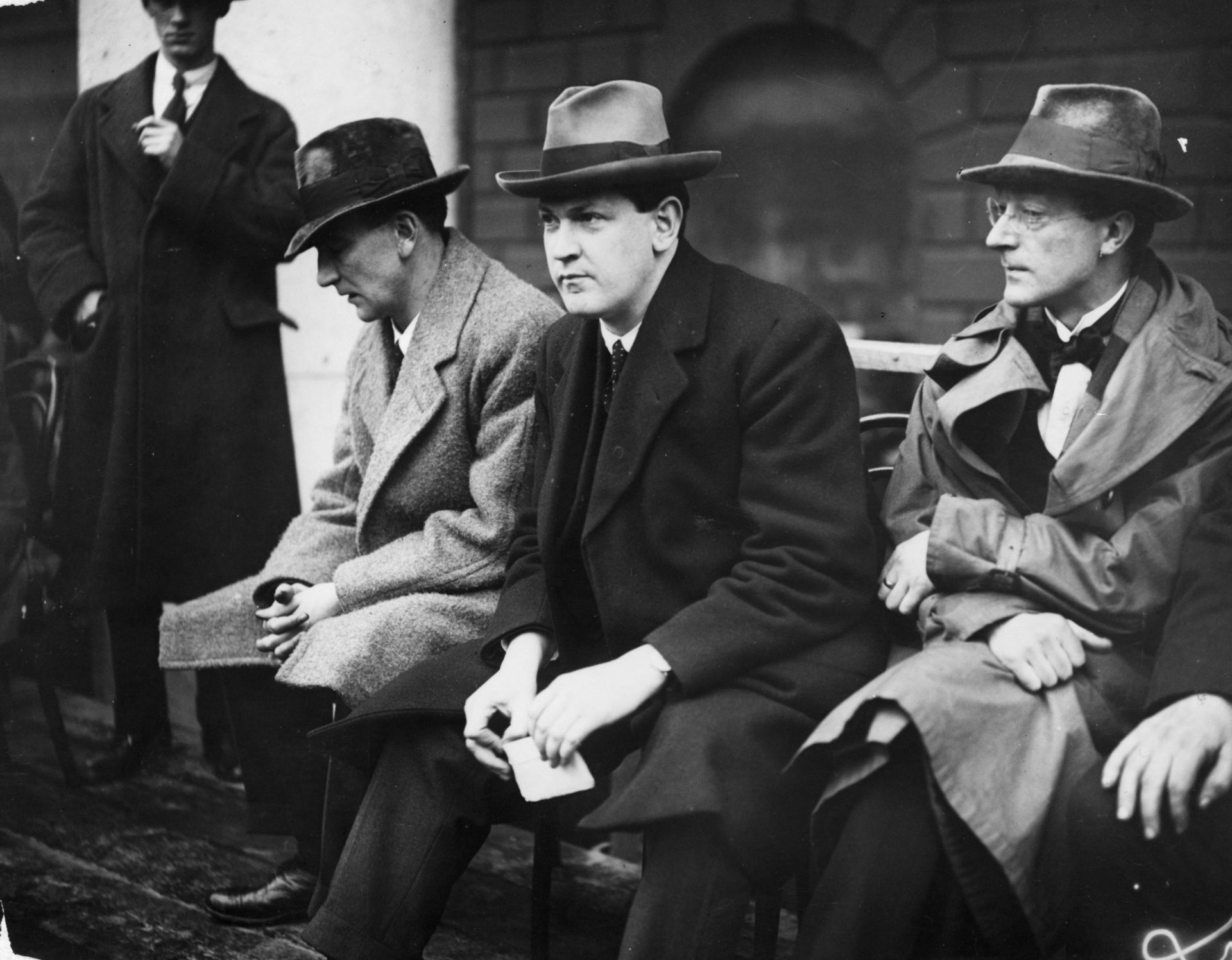 Members of the anti-Treaty IRA in Mayo were determined to prevent as many people as possible, including Collins himself, from attending the rally at the Mall, and from Saturday night, parties of armed men began dismantling railway lines and erecting barriers of heavy boulders and trees across the main approach roads to the county town. The meeting was scheduled for 2pm on Sunday, but by early morning it was apparent it wouldn’t commence on time, if at all. Rail lines had been torn up between Bekan and Ballyhaunis and Balla and Claremorris to prevent special trains from Athlone, Tuam and Ballinrobe from reaching Castlebar. When a breakdown gang tried to repair a section of rail north of Kiltimagh to allow a crowded train from Sligo to get through, they were ordered at gunpoint to halt their work and the driver was told to return to Swinford.

Large numbers were expected to travel from Ballina but they too had to make alternative arrangements after a group of armed men ripped up 40 yards of railway beyond Foxford. Most cars in Ballina had been commandeered the previous evening but some train passengers secured vehicles and set off for Castlebar, only to be stopped at armed checkpoints and ordered to return. Foxford-based Dr Padraig Dunleavy, who was due to share the platform with Collins, was turned back at Ballylahan Bridge but managed to reach Castlebar by a ‘circuitous route’.

Meanwhile, at the Green, organisers had erected a stage at the front of the courthouse consisting of two lorries and a brake, but were forced to move it when a number of youngsters climbed onto the flat roof of the building and began to throw down leaflets and other items. The platform was hastily disassembled and transferred to the east side of the Mall between the Imperial Hotel and the Bank of Ireland.

It was now shortly before 5pm and a large crowd – numbering about 2,000 – were eagerly awaiting the arrival of Collins and his entourage who were believed to be travelling on the Athlone train. In fact, Collins had arrived in Castlebar some time earlier and motored to Balla in the company of Alex McCabe and several others to inspect the damage caused to the railway line. While there, Collins’ party met a young man standing suspiciously on the roadway beside an obstruction of trees. McCabe searched the man and seized a gun.

“Who are you going to shoot?” asked Collins.

“Were you going to fire shots at a political meeting?”

Upon quizzing the man further, Collins discovered he was an IRA lieutenant from Kiltimagh named Martin Lavan and a former member of the 3rd Battalion Dublin brigade. In fact, Lavan was one of the IRA’s spies in Dublin Castle who had to resign his position in late 1920 when the British became suspicious after Bloody Sunday. On learning of the young man’s IRA background, Collins told McCabe to return the gun and sent Lavan on his way.

On Collins’ instructions, the railway at Balla was hastily repaired and the Athlone train carrying several hundred supporters and some pressmen reached Castlebar shortly before 5pm. It was the only train to make it through that day.

By the time Collins and McCabe arrived at the Green, the meeting was already underway and a section of young men, some in Irish Volunteer uniform and drawn mainly from the West Mayo IRA brigade, were interrupting the opening speakers, pro-Treaty TDs Joseph MacBride and William Sears. The youngsters repeatedly sang ‘The Soldier’s Song’ and greeted any reference to the provisional government with loud boos and jeering. The Irish Independent described the reception for Collins:

Mr Collins, on rising to speak, was cheered for some minutes, but directly he began his speech, the storm of interruptions increased in intensity. Frenzied young men worked themselves into a passionate heat with a breathless continuation of inarticulate cries.

Mr Collins calmly surveyed them, now and then replying to a remark that made itself heard above the uproar. He said he hoped the people of Mayo would not support the men who tried to murder people by tearing up the railway lines that morning. That was the Black and Tan method but the Green and Tans were not going to be any more successful than the others.

While Collins persisted in being heard above the ceaseless din, a motorcar containing several men slowly forced its way through the crowd, eventually stopping about 10 yards from the stage. The unmistakable figure of anti-Treaty councillor Thomas Campbell, from Swinford, emerged and began to wave a typewritten document in Collins’ direction, shouting: “Will you answer my questions?”

“Bring them up here and I will answer them when I have finished my speech,” Collins replied.

Campbell was certainly not going to refuse the invitation. As he made his way through the crowd, elderly men shook their fists and shouted “Don’t let him up”, but one of Collins’ retinue helped the councillor onto the back of the lorry and he immediately began to address the crowd, who shouted him down. Campbell then conversed briefly with Collins before the latter told the crowd: “He has the questions written out, but he won’t give them to me.”

“I will ask them,” replied Campbell.

Collins resumed his speech but Campbell repeatedly interjected, accusing his opponent of being afraid to answer his questions, prompting Collins to jokingly rejoin: “He brought out the brass band in Swinford in honour of Queen Victoria’s jubilee.”

The noise from the crowd was now so deafening that neither Collins nor Campbell could be heard by anyone other than those at the front, while on the platform itself some ladies and priests were preventing several men from forcibly ejecting the councillor.

“I don’t want physical force to be used,” Campbell was heard to shout amid howls of derision from the crowd.

“I don’t want this clergyman interfering,” Campbell retorted as Collins resumed his speech, telling the crowd ‘freedom is freedom, no matter what we call it’.

A now agitated Campbell, who was on the point of being assailed by several furious men, pointed at Collins and shouted: “The faithful subject of King George.” Collins had had enough. He swung around to face the councillor and angrily retorted: “Your conduct is worthy of your record. You took good care to be in jail when there was danger.”

It was an unfair charge. Campbell attended most meetings of the county council throughout the winter of 1920-21, so nobody could say the Swinford man hadn’t played his part in advancing the republican cause in Mayo.

As tempers frayed, some of the crowd tried to pull Campbell off the lorry but were restrained by Alex McCabe and several of Collins’ security detail.

The Volunteers from the West Mayo IRA brigade were also trying to storm the lorry, which was beginning to dangerously sway. McCabe, standing near the driver’s seat, drew a revolver. The Irish Independent described what happened next:

The oncomers halted suddenly, and several of them also produced revolvers. A wild scene followed. Some of the crowd rushed pell-mell to safety, while supporters of Mr McCabe dashed up, guns in hand.

The group broke, and the armed men continued the heated argument in twos and threes. Men and women looked on that strange, unreal sight, fearful and trembling.

Just then there was a wild commotion in part of the crowd. A tall young man was seen dashing through the people pursued by some officers in uniform. He broke clear and rushed up Spencer Street, and several shots rang out. Panic ensued amongst a group of women and children. Some fainted and others screamed and became hysterical, but most of the crowd stood fast. 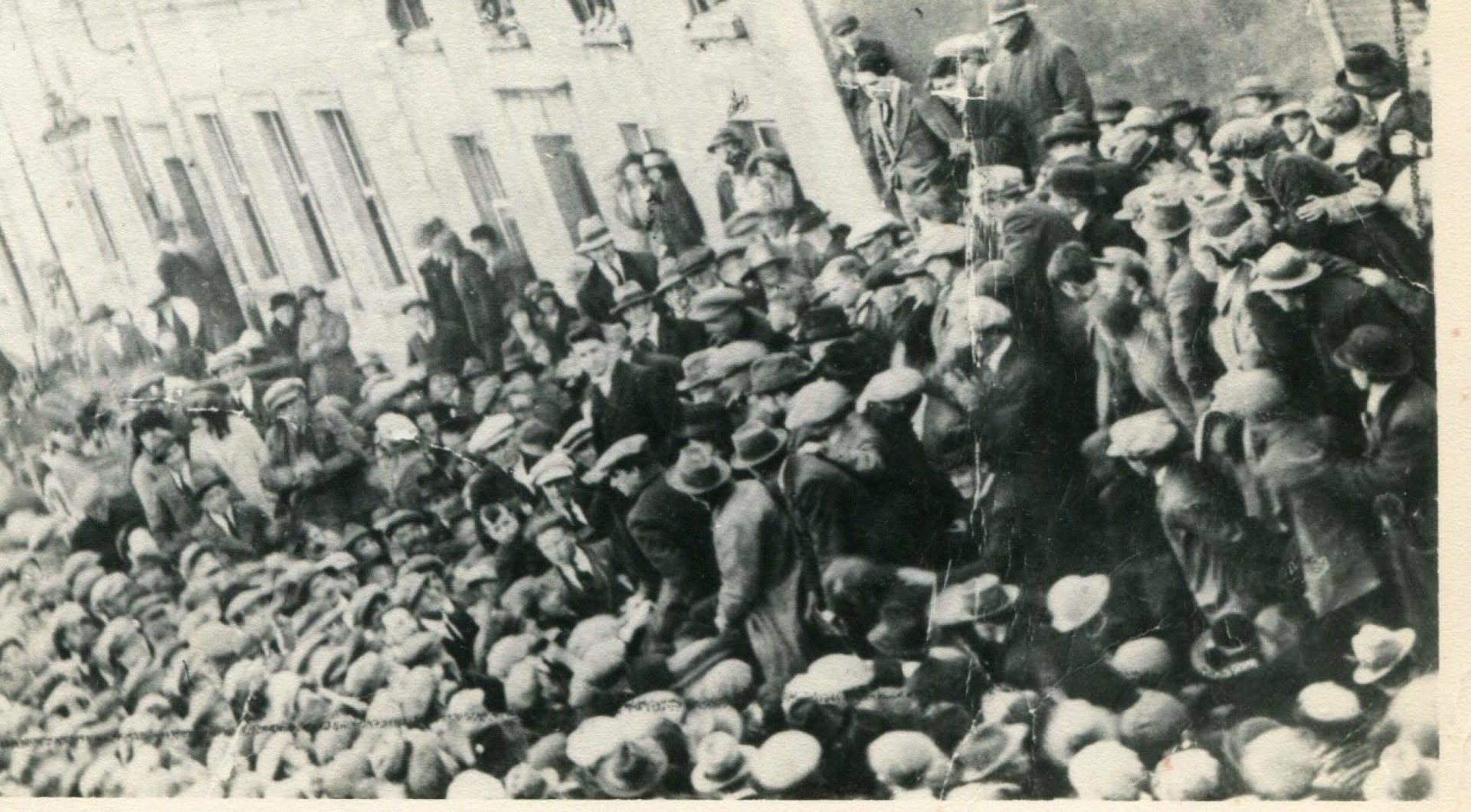 The chaotic scene outside the Imperial Hotel in Castlebar during the pro-Treaty rally in April 1922.

The tall young man was Charles Byrne from Dublin, a member of Collins’ party, and he exchanged gunshots with Brod Malone of the West Mayo IRA before disappearing into the Commercial Hotel where he was arrested. A local woman, Mrs Fogarty, was slightly injured in the incident.

Back at the Mall, Thomas Campbell had wisely used the commotion to exit stage left, leaving the platform free for Collins who was now speaking uninterrupted amid what the Independent’s reporter described as a ‘strained calmness’.

“This is not the kind of freedom all my friends and I risked our lives for,” he said.

“If the people decide for the opposition policy they will find me behind them. I will stand with the people, no matter what their decision is.”

Collins was still speaking when an IRA officer in uniform climbed onto the platform and announced that the meeting was being ‘proclaimed in the interests of peace’. Another man leapt into the driver’s seat of the lorry and started the engine, forcing Collins, McCabe and several other men to jump from the moving vehicle. The women and priests were driven away and deposited in another part of town.

It was a suitably incongruous end to a riotous meeting, the like of which had not been seen in Castlebar in a long time, and unfortunately, it set the tone for much of what was to unfold in Mayo in the months ahead.

* The above is an extract from James Laffey’s book Rebels in the Courthouse: Mayo in a Time of Revolution.