Newport has played host to a special commemmoration event to honour the life and legacy of one of its most famous sons. 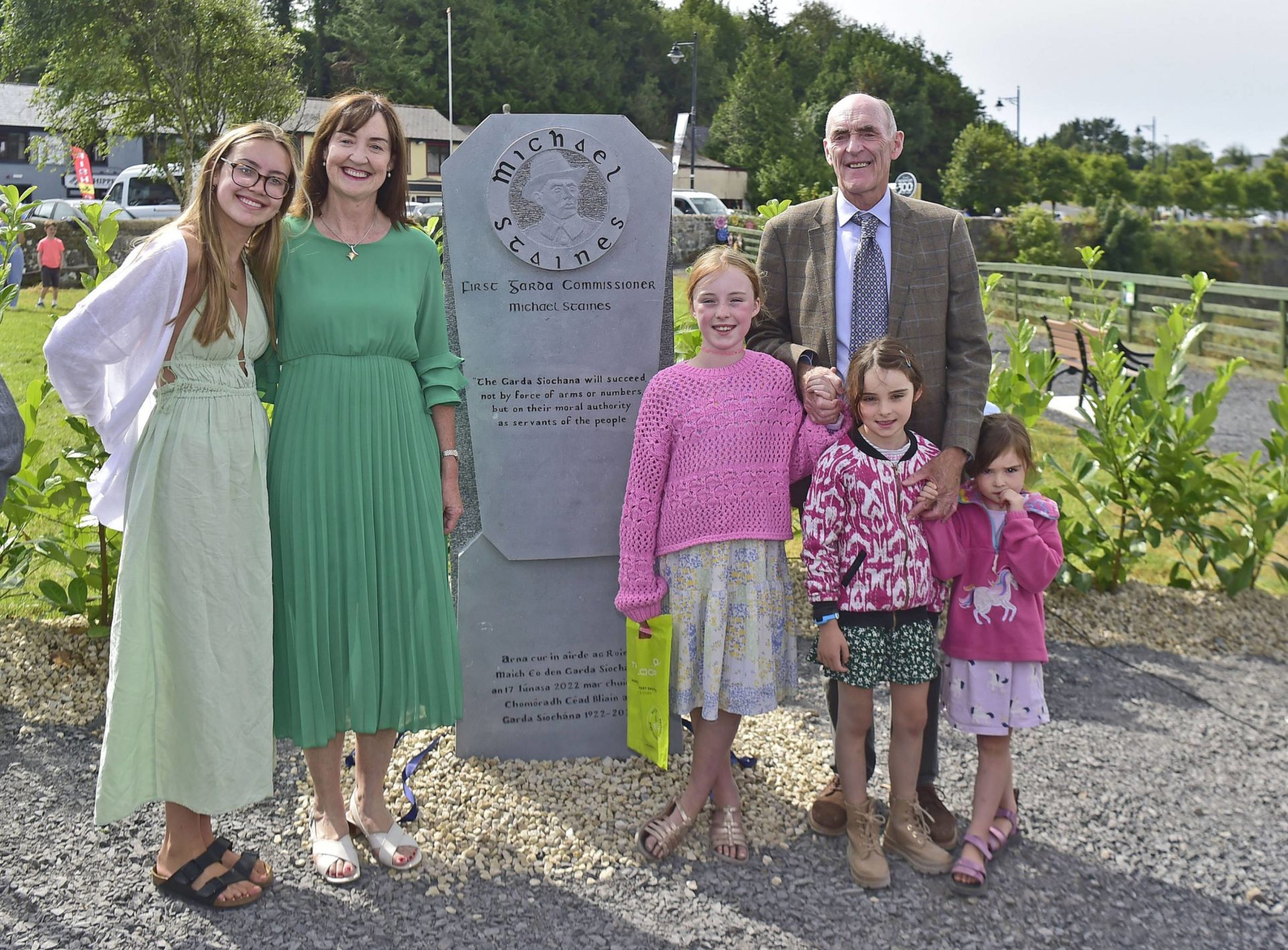 Judge Catherine Staines with her daughter and Michael Staines Jnr with his grandchildren at the sculpture unveiled to honour the life and legacy of the first Garda commissioner, Michael Staines. Picture: Conor McKeown

Inscribed are his iconic words: “The Garda Síochána will succeed not by force of arms or numbers, but on their moral authority as servants of the people.”

The Garda regional ceremonial unit marched through Newport and the Garda Band also played. Senior Garda officers and more than 60 members of the Staines family were in attendance at the sun-soaked ceremony.

Michael Staines was born in Kiltarnaght, Newport, in 1885, the son of Margaret and Edward, a Royal Irish Constabulary officer. Michael Staines was born in Kiltarnaght, Newport, in 1885, the son of Margaret and Edward, a Royal Irish Constabulary officer. Picture: Garda Archives

He went on to become an Irish republican, serving as quartermaster general of the Irish Volunteers in the GPO during the Easter Rising and was later interned with fellow insurgents at Frongoch internment camp in Wales.

On his release from Frongoch, he collaborated with Éamon de Valera, James Ryan, Eamonn Duggan, and others in founding the New Ireland Assurance Collecting Society, in furtherance of the Sinn Féin policy of investment in Ireland.

He was elected director for supply for Sinn Féin on October 27, 1917, and was also elected as a Sinn Féin TD at the 1918 general election.

However, it was his appointment as Ireland’s first Garda commissioner that will arguably be the lasting legacy of a remarkable life.

Mr Staines was just 37 years old when he was appointed Garda commissioner in April 1922.

Garda sergeant and historian Dr John Reynolds delivered the keynote address at the ceremony. He told the large crowd that Mr Staines took on the role during an incredibly tumultuous time.

“He was given an almost impossible task to begin with and few or any people could have done a better job,” he said.

Michael Staines Jnr said his grandfather was a hard worker, an efficient organiser, and a man who many considered to be Michael Collins’ “right-hand man”. He said he rarely discussed his role in the rising and its aftermath.

Commissioner Harris said Mr Staines’ skill and ability, matched with his extensive experience of the very difficult period in the lead-up to the formation of the State, made him a natural choice. 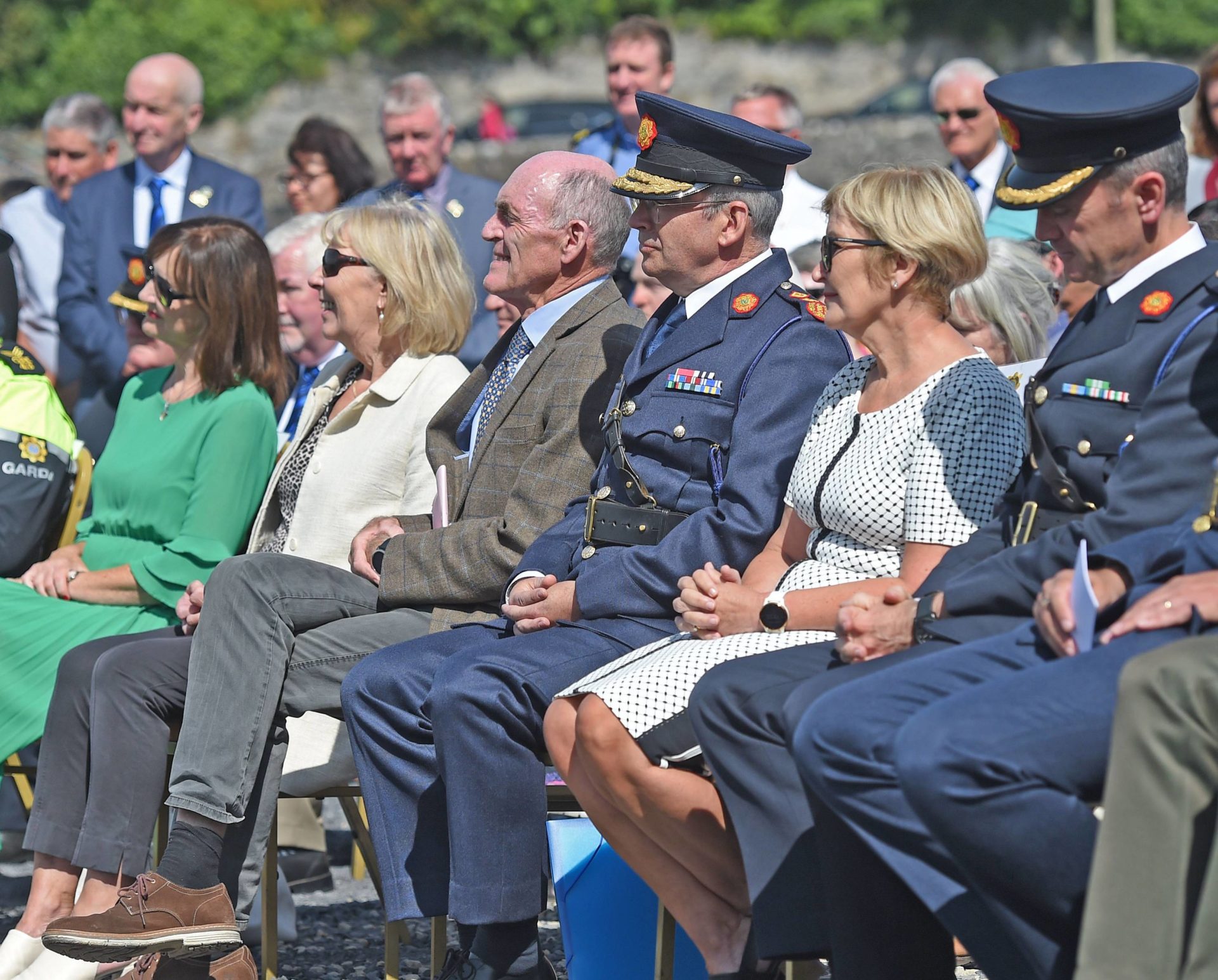 Garda Commissioner Drew Harris and members of the Staines family at the event held in Newport. Picture: Conor McKeown.

He moulded the tradition of unarmed policing by consent that has evolved into the present-day An Garda Síochána.

“Commissioner Staines’ vision for our organisation was for it to depend on its moral authority in Irish society, as loyal servants to its people. And that vision has gone on to define our policing presence in Ireland,” he said.