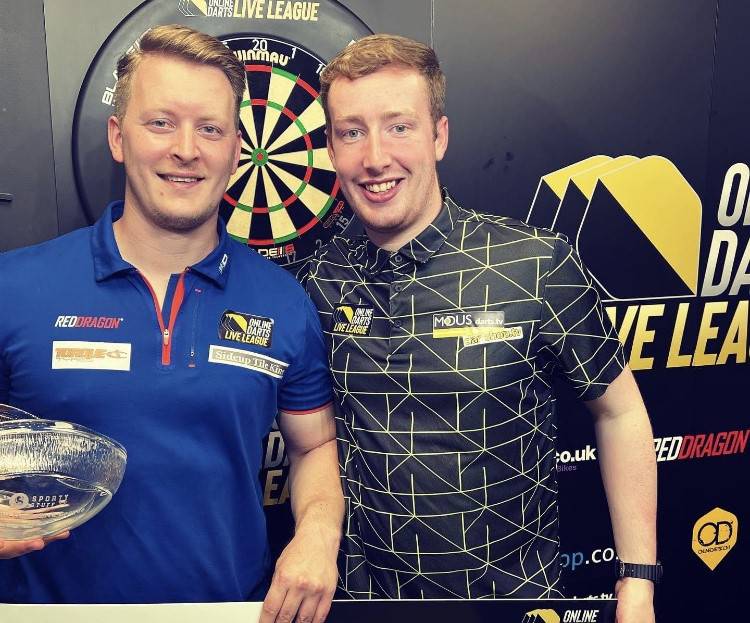 The nine-darter is the holy grail for darts throwers – some professionals go through their entire careers without one being recorded for posterity – but while this was Heneghan’s first time achieving the feat in a televised match, it certainly wasn’t his first ever. It wasn’t even his first of the night, as it turned out.

“I had actually hit one in practice going into that match, so I hit two that night!” revealed Heneghan this week.

“But that was my first competitive, televised nine-darter. I think I’ve hit nine of them altogether now but that was the first one on TV, in an important game.

“It was enjoyable at the time but you kind of couldn’t think about it because you have to keep going, I still had a few more games to play that evening so I couldn’t really dwell on it.”

What goes through a player’s mind when he steps up the oche with the first six triple-20s in the bag and the nine-darter within grasp?

“You’re just hoping that they go in, more than anything!” laughed Heneghan.

“But in a game, I wouldn’t really be thinking about it that much. You think about winning the leg more so than hitting the nine. Just make sure you don’t lose the leg.”

Heneghan has been a promising player on the local and national darts circuit for a while now, going back to his days playing in the youth ranks. He was a member of the team that won Ireland’s first and still only under-18 European Cup title back in 2015 and regularly represented Mayo at All-Ireland inter-county level as a youth.

He didn’t lick it off the stones – his late father Padraic was a fine thrower in his day and his brother Martin, seven years Conor’s senior, has long been established on the Irish darts scene. Just this year, Martin captained the Irish team at the Six Nations Cup in Scotland.

Conor Heneghan was raised to seek out double-tops.

“We used to play in Lyons’ in Roundfort, that would be our local. You have local competitions, memorials and that sort of thing. Then you’d go into the Mayo circuit, start playing for Mayo, and then I started playing youths with Ireland,” he said.

But it’s only in the last year or so that Heneghan, now aged 23, has taken the step forward to compete at the sharper end of the sport, throwing against professional players from the UK and Europe and edging ever closer to a precious PDC Tour Card.

The card would give him the right to play in the biggest competitions, such as the World Championships at the Alexandra Palace every Christmas.

One of the major factors in his recent progress was Covid-19, and the extra time afforded to him by lockdown.

“During Covid there was nothing else to do, no football or no soccer,” said Heneghan, who plays the former for Hollymount-Carramore and played the latter, up until recently, for Ballyglass.

“I was off work and I was at home, so I was playing nearly every day, two to three hours a day. I was playing tournaments against professionals, the likes of Simon Whitlock, Dave Chisnall, Michael Smith, playing against those guys online.

“I got confidence from playing against them, sometimes beating them but also learning from losing, learning the kind of standards I needed to get to. It really helped me,” he continued.

Those hours of practise have paid off handsomely. This year alone, Heneghan has already recorded some eye-catching victories. He claimed the INDO (Irish National Darts Organisation) men’s singles title in April and followed that up by winning a PDC Development Tour event in Wigan in May.

The Development Tour is open to players under the age of 24 and is the rung immediately below the full PDC Tour, offering young players the chance to qualify for the big leagues.

“Before this year I never used to travel outside Ireland. If it was outside of Mayo I’d barely go to it, once I was finished in the youths, because I was always playing soccer and football,” offered Heneghan.

“But lately I’ve started travelling that bit more and I’ve been doing well, people are starting to recognise who I am. That’s been a bit lift for me.

“Obviously winning the All-Ireland with Mayo was just building on that. It’s about going over to England and showing what you can do. Winning that Development Tour event was good as well. I’m well up there in that Tour, I’m ranked eighth at the minute.

“I’m flying out to Germany in two weeks’ time for another one of those events. If I can climb high enough in those I can get a Tour Card out of it, but it will be hard done,” he said.

Getting hold of a Tour Card is the next logical step in Heneghan’s development and his immediate ambition. He regularly competes against full Tour players already; he narrowly lost a Development Tour final back in February to Meathman Keane Barry, who threw at the last two World Championships at the Ally Pally.

“I’d be on the brink of it now,” he stated. “I should be getting it in the next year, maybe two years. If I play my own game I know I’m able to compete with these guys. It’s about getting a bit of luck as well at the same time. You need that to get over the line. And once you’re in there, you have to stay there. There are no second chances.

“Myself and Keane played together at youth level. Keane just went straight for it when he was young. He was full-time darts, darts, darts. That’s where I’m getting to now. I’m playing more darts than I ever did. Hopefully it goes well and we’ll see what happens,” he continued.

The Development Tour is one pathway to the top. The PDC’s Q-School is another, open to players of all ages but requiring a registration fee of £1,000 to enter. Q-School is a five-day event held every January; Heneghan competed at this year’s event but narrowly missed out on his Tour Card.

“I was close enough this year, I won the first stage but I was beaten in the last 16 by (two-time BDO World Champion) Scott Waites and he went on to get his Tour Card that same day,” he said.

“It’s all a learning curve. I missed a dart to beat him so that was kind of my own fault. But I’ll go again next year and see, if I don’t get it from the Development Tour first.”

Darts is a game played with the mind as much as the wrist and competing at the level Heneghan aspires to takes no small amount of practise and dedication, most of it spent a long way away from the bright lights and baying crowds of the Ally Pally.

When it comes to his practise hours, the Roundfort man is a believer in quality over quantity.

“It’s different for different people,” he offered. “I wouldn’t do any more than an hour a day, to be honest. Almost like a normal training session. You’d do about an hour two or three nights of the week and then you might play a game on a Friday night.

“I know other people that would do three to four hours a day but that wouldn’t be for me, I’d kind of get bored of it. I wouldn’t be able to keep going like that.

“It’s all by yourself and it’s all concentration. It’s more in your mind really. Everyone is well able to throw good darts, but when to do it is the key.

“It depends on the situation. Sometimes I get nervous and sometimes you’d be alright. Everyone gets nervous, it’s the same for both players.” 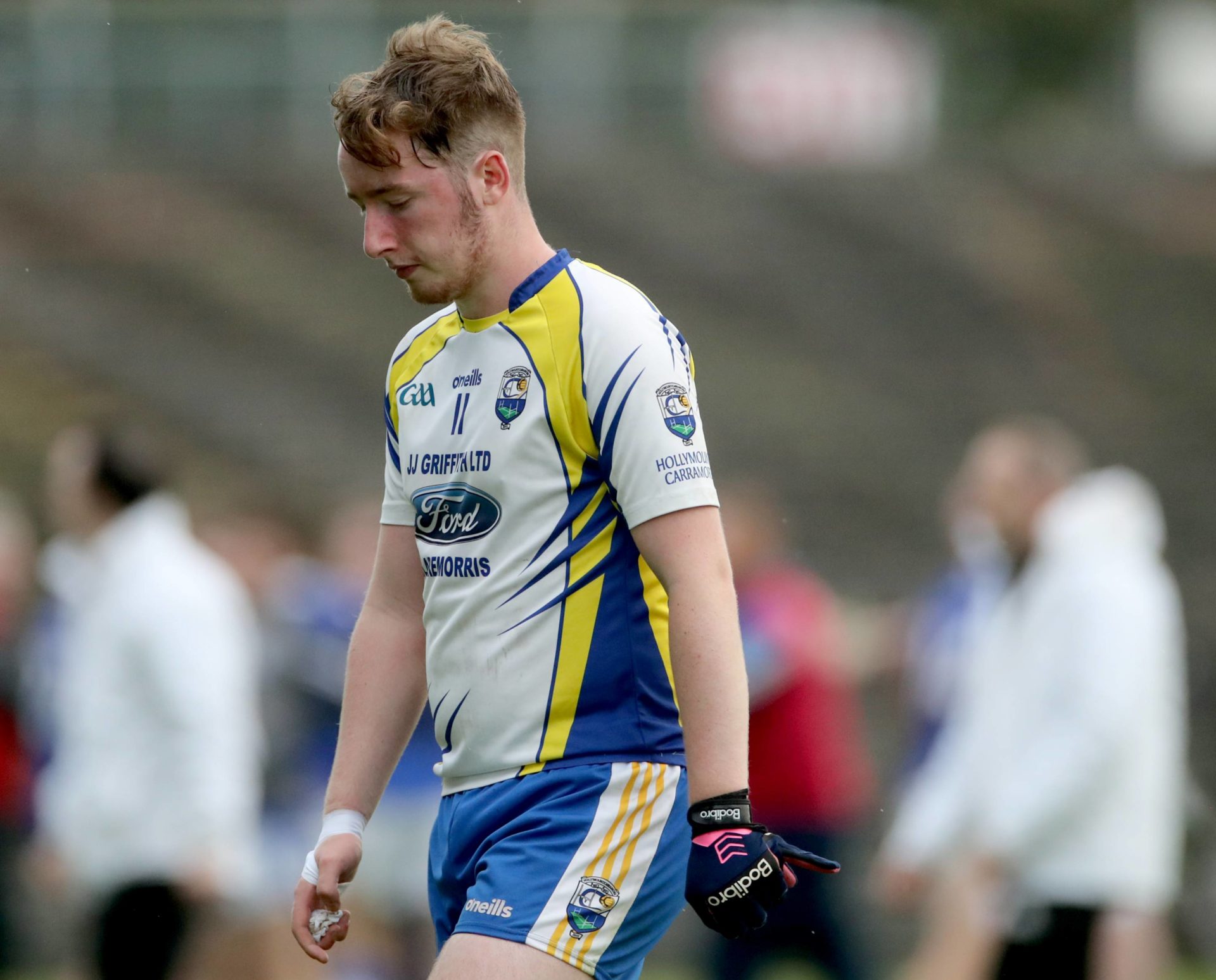 Conor Heneghan in action for his club Hollymount-Carramore in their 2020 Mayo IFC semi-final against Kiltimagh. Picture: INPHO/James Crombie

Besides, darts aren’t the only sporting iron in Heneghan’s fire at the moment. He is a talented Gaelic footballer, a member of the Ballinrobe Community School team that won an All-Ireland Post-Primary B title in 2017.

Playing at centre-forward in a team which featured future Mayo senior stars Oisin Mullin and Tommy Conroy, Heneghan kicked 1-5 in the All-Ireland final at Croke Park and was named Man of the Match.

He still plays a crucial role for his club, Hollymount-Carramore, and is looking forward to the start of their intermediate championship campaign next month.

“I’ve missed a few league games this year with the darts and travelling overseas but I’ve been training a good bit,” he offered. “It’s just about finding the time. I’m free for most of the championship games so I’ll be around for that anyway.”