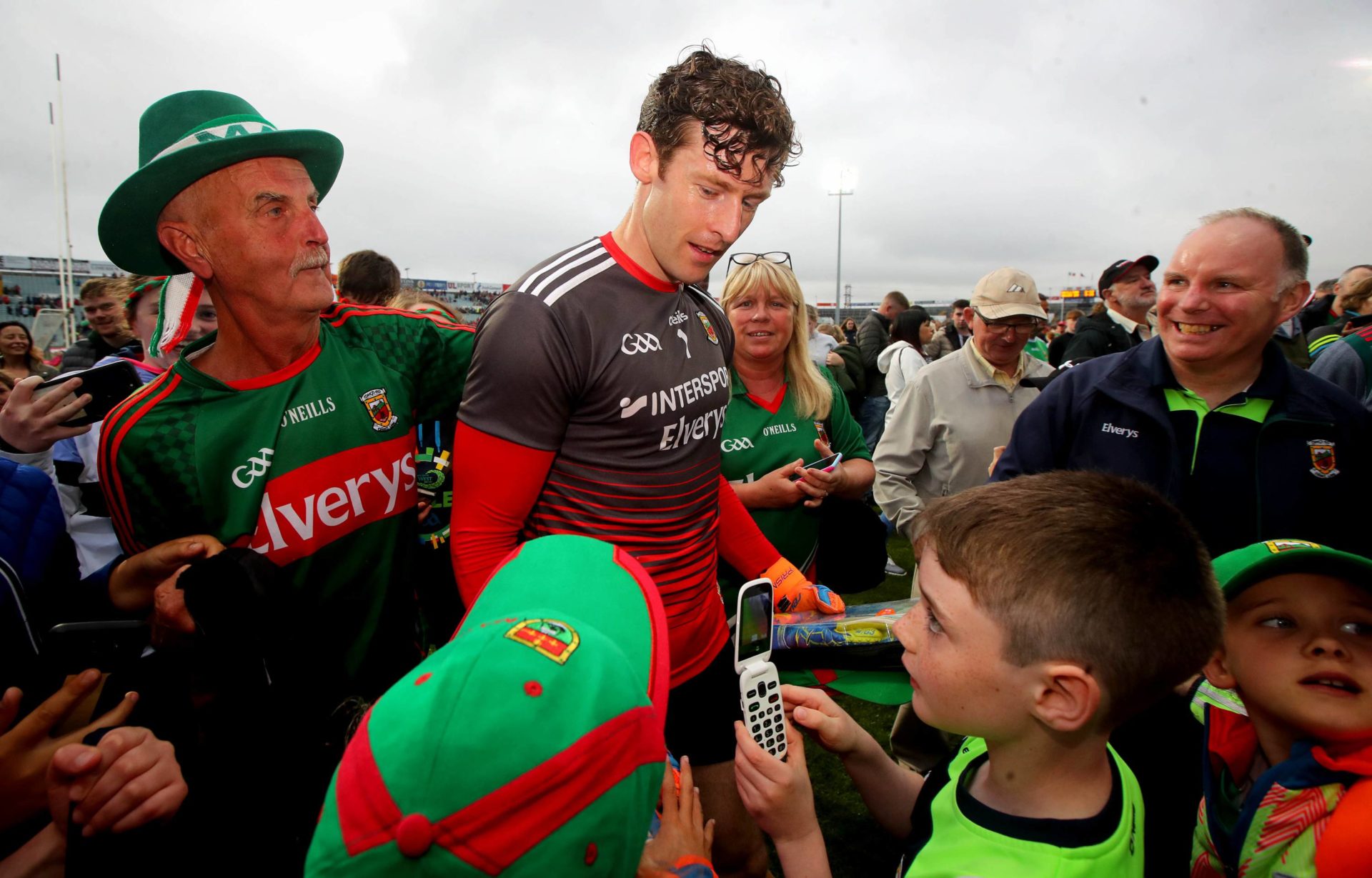 David Clarke is one of only two Mayo goalkeepers to ever win an All-Star, with the Ballina Stephenites clubman receiving back-to-back awards in 2016 and ‘17. His current Ballina teammates Jack and Frank Irwin are sons of Mayo’s only other All-Star goalkeeper, Gabriel. Picture: ©INPHO/Ryan Byrne

It’s over 20 years now since David Clarke played his first senior game for Mayo, a National League match against Kildare in Newbridge in March 2002. Two decades on, the two-time All-Star goalkeeper is still soldiering away for Ballina Stephenites, still doing his bit for the club and the town that first nurtured his talents back in the 1990s and set him on his way to becoming one of Mayo’s best-ever keepers.

“When I started there were still Town Leagues, the town was divided into five areas. It would have started around under-10s, there were no academies at that time. You’d play off in the leagues and then have semi-finals and finals. That was my earliest memory,” he said last week.

“My team was Fitzgeralds, we were sort of in the middle of the town. We played in them for a few years and then moved up. It would have been around under-12s when the Stephenites started as such.”

The Town Leagues were a feeder system for the Stephenites’ underage ranks for decades before they eventually petered out in the late 1990s. It was in those leagues and in the national schools around the town that the likes of Clarke and his peers, who would go on to play pivotal roles when the Stephenites won their All-Ireland in 2005, first began to learn the game, under the watchful eyes of the guardians of football in Ballina. 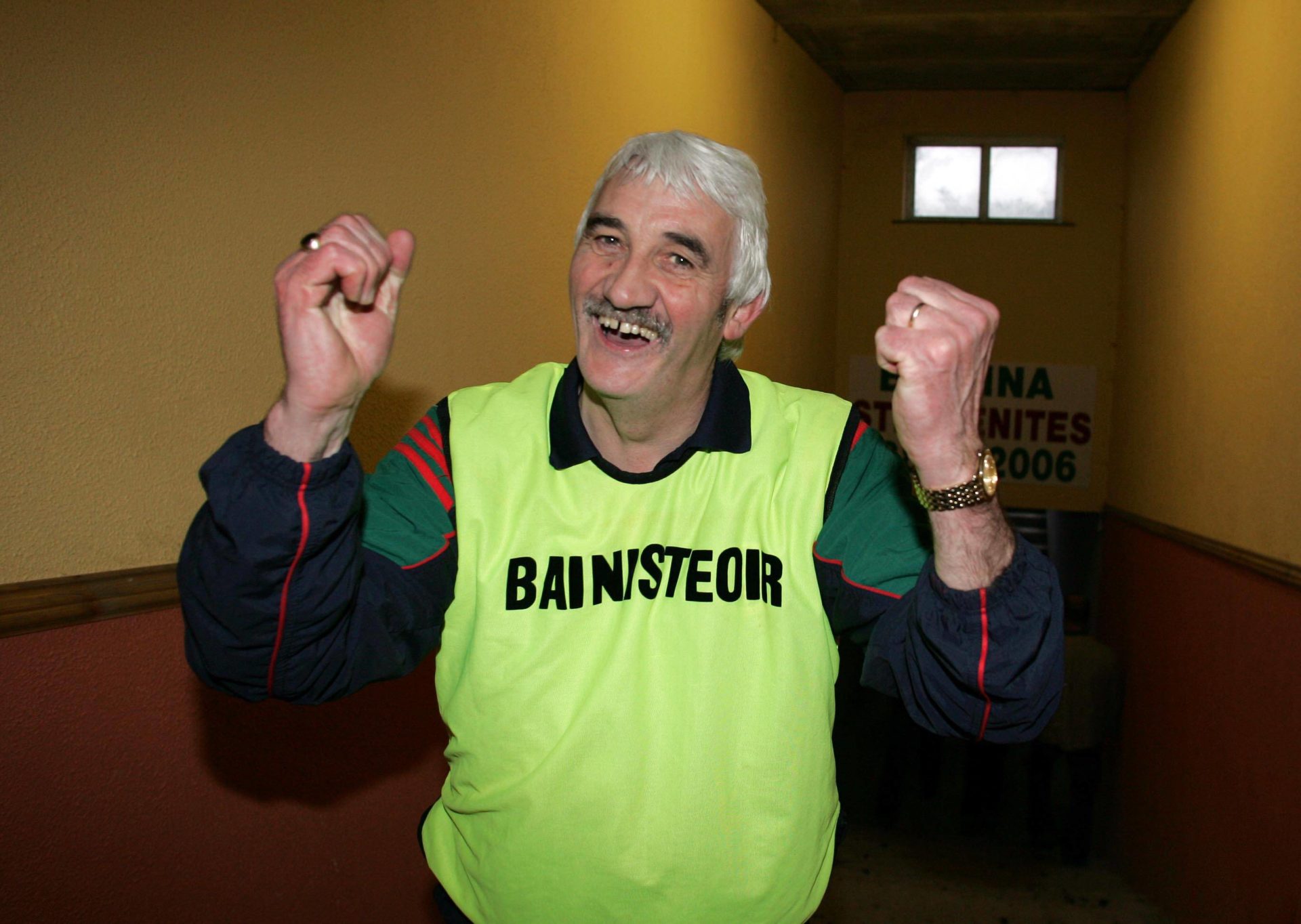 Liam Higgins managed Ballina Stephenites to Mayo and Connacht senior football titles in 2007 but it was in his capacity as principal of Scoil Padraig that the Galway native had a big influence on a young David Clarke. Picture: INPHO/Andrew Paton

Clarke was part of a bumper crop of players who hoovered up county underage titles in the late 1990s. The likes of Stephen Hughes, Shane Melia, Martin Wynne, Patrick McHale, Colm Leonard, Enda Devenney and Pat Harte were all in and around the same age grade and they would form the foundation of the Stephenites’ historic 2005 side.

Clarke was always the goalkeeper – he said that aside from a couple of games playing outfield for United in the Town League before Fitzgeralds snapped him up, he has never played anywhere but between the sticks – and he was identified as a huge prospect from a long way out.

He was famously brought into the Mayo squad in 2001 aged just 17, around the same time as he was first brought into the senior set-up in the Stephenites. But while most players in with the county squad would have been the automatic first choice for their club, that wasn’t the case for Clarke in those early years as a senior.

“I wasn’t playing much, John Healy was there at the time, a very good goalkeeper, so I was trying to get a look-in,” he recalled. (Healy would start in goals for the Stephenites in the All-Ireland final on St Patrick’s Day in 2005, even though a 21-year-old Clarke was the man named to start for Mayo come the Connacht championship three months later.) “But we had good junior teams, our second team was quite strong with all that underage success that was coming through. And a few of those players that were in the team in 1999 had gone back playing junior. So I was playing junior even though I was in and around the Mayo squad.

“I did my cruciate when I was 18, the summer after my Leaving Cert, so I missed a year there. But coming back after that I was mainly playing junior. We got to a county junior final and a couple of North Mayo junior finals. There was a good mix of lads, good enjoyment in it.”

Clarke and his underage teammates had watched as the Stephenites grew in strength in the late 1990s and made their way as far as the All-Ireland club final of 1999, only to lose to Crossmaglen. Clarke’s under-16 team at the time was brought to watch the semi-final win over Doonbeg of Clare at Duggan Park in Ballinasloe that February.

“That really whetted the appetite, to see what could be done. To be winning big games and playing in Croke Park,” he recalled.

“The club was quite good for bringing us to games. They brought us to Croke Park one time too, Mayo were playing Derry in a league semi-final (in April 1996). That would have been the first time in Croke Park for a lot of us.

“There was a good connection there between the school and the club. The school had a connection with a school in Dublin so we would go up there every year and they would come down to play us. All the players in Scoil Padraig at that time would have played for the Stephenites. Liam Higgins would have been a big influence there, and Tom Maughan.

“It all connected. I’m sure it wasn’t easy organising those kinds of things but they had been doing it for years. That’s the stuff you remember when you look back; it mightn’t be the games, but getting away, getting up to Dublin for two or three days, staying with fellas up there and just wandering around the city when you’re 11 or 12 years old,” he continued.

But even while the club was competing for county and Connacht titles at senior level, Clarke never felt any overbearing sense of pressure or expectation to live up to those levels while playing under the Bord na nÓg. The emphasis was on participation and enjoyment, at least until things started to get more serious as he and his peers approached senior level.

“I think it was more about enjoying the game. I don’t remember ever hearing a harsh word from any coaches. We were quite lucky in that we were successful and fellas turned up, but it was about going out playing football and enjoying it,” he said.

“Later on when we got to be seniors there was a lot of talk about success, but with the underage it was just going out to play and enjoying it. As young fellas you don’t really care, you’re not that worried about it, it’s just doing your own thing. It’s only in later years when you look back at the way the club was built up and the foundation of the Bord na nÓg.

“We played a lot of teams out in the likes of Belmullet and Kiltane, and we were told that these lads would be calling us soft town teams, nearly to try to harden us up a bit or give us a bit of an edge! It was maybe a bit of reverse psychology. We were certainly never told that we were too good to be playing these teams.”

Clarke has recently started dipping his toe into coaching with the Stephenites’ underage systems. His two daughters are in with the Young Knites under-6s and under-7s and every Wednesday evening, the two-time All-Star is up at James Stephens Park passing on the same skills that were given to him in the Town Leagues and on the pitch at Scoil Padraig nearly 30 years ago.

“I do have an interest in it and I’d like to give back. I do a small bit with the North Mayo under-14s, with the goalkeepers there on a Saturday morning. It’s just trying to find time to fit these things in. Even if it’s an under-12 team or something, you’re still gone three evenings a week, if you’re training twice and playing a game,” he said.

Between still playing senior football, his work as a Garda and family life, finding time to dedicate to coaching is tricky, but it’s certainly something Clarke hopes to be able to devote more time to in the years to come.

“There’s probably two reasons you do it: there’s the satisfaction you get from doing it, and if you don’t do it, you’re not going to get any better. Then it’s also wanting to see Ballina doing well, to see can you be any influence or help,” he said.

“There’s good work going on. There are North Mayo under-14 and under-16s playing now and we would have three or four lads on each of those teams. There are definitely quality players coming through. As long as they enjoy it. There are challenges with different sports in the town, the rugby and the soccer, there’s competition there for players. Fellas that tend to be good at one, tend to be good at the other. You have to try to make it appealing for them.

“There’s good work going on from our own senior management. Orla Heffernan organised a few weeks ago to get the under-8s and under-9s to walk out with us before a league match and they played a bit of a game at half-time. Ballina is a funny place in some ways; a lot of the people who have children in the town might not necessarily be from the town or have a connection to the club. So that got some parents and their children up watching a senior game for the first time. That type of stuff puts a memory in the child’s head, and small things like that can make young players want to continue on,” Clarke concluded.