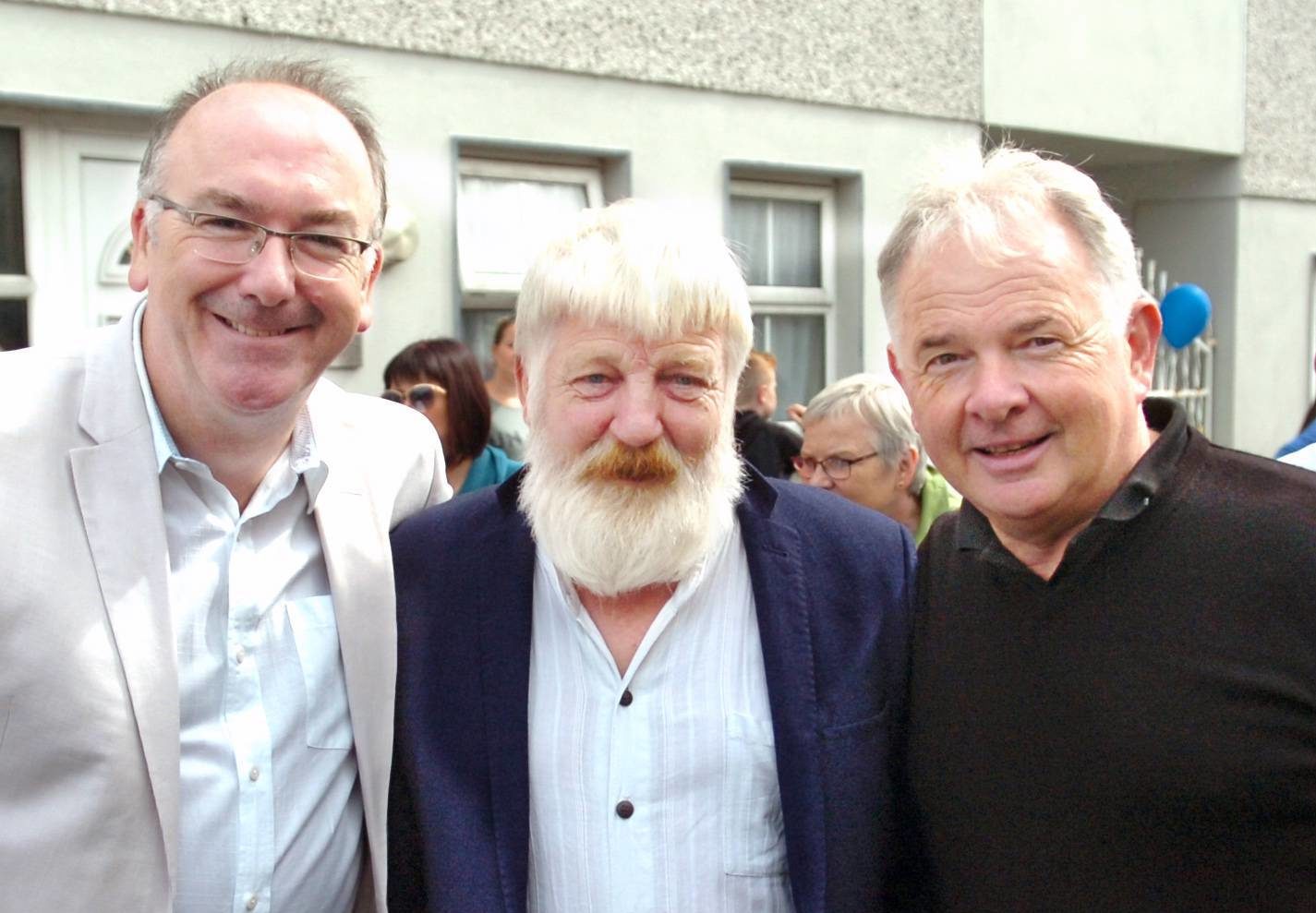 Brendan ‘Swanee’ O’Hora, centre, is one of the best-known faces around James Stephens Park having spent his entire life in and around the ground. He is pictured with John McGowan and John Kelly at the centenary celebrations of St Muredach’s Terrace where he was born and raised. Picture: Henry Wills

Ballina Stephenites is a ‘way of life’ for club legend Brendan ‘Swanee’ O’Hora.

The dedicated clubman has lined out with distinction for his beloved Stephenites, managed their junior side, as well as performing umpiring, commentary and refereeing duties.

“I’ve been there since I was about four or five. The pitch was our playground. I was always in the Stephenites. I was never out of it. I was a water boy and jersey boy when they won the county championship in 1966,” said the Muredeach’s Terrace native.

This year marks the 50th anniversary of Bord na nÓg in the Stephenites. Brendan said 1972 was a year that changed the trajectory of the club.

“We won a North Mayo U16 title in 1972 and out of that team most of them never went on to play minor. I can count eighteen of that team that never played football again. Soccer was a big thing at the time. The big problem for the Stephenites was that you had the schools, you had the town leagues, but there was nothing going up to the mothership. The clubhouse was being built in 1972 and then the greatest thing that ever happened to the Stephenites occurred, Bord na nÓg came,” said Swanee.

He said the senior team was in danger of entering the doldrums before the dawn of a new era.

“I was playing senior football at 16. I was a forward and a free-taker but you could nearly pick any jersey you wanted. After the success of ’66 the team was waning out. In ’74 we got to a county semi-final but you were dependent on players coming from elsewhere and nothing was coming up through our own ranks. Bord na nÓg was the most defining thing for the Stephenites. It was a great vision. You had a whole group of people who knew about football and most importantly knew about organisation,” said Brendan.

Brendan O’Hora (front) pictured with Ivan Heffernan ahead of his first game with Scoil Padraig NS, Ballina in 1964.

“Terry Reilly was certainly the top instigator with Brother Sebastian, Kevin McStay Snr, John Kenny and a host of others. Everyone bought into it, that was the great thing. It was brilliant. It really started to bear fruit around ’75 or ’76, and a few players started to filter in. But you had quality in the ones that came up. When these fellas started to come through you could see the quality and ability they had. They had been well coached and drilled,” he added.

A golden generation of Ballina footballers emerged in 1980s, players who had swept all around them at underage level.

“There was a team that I call the Kevin McStay, Paul McStay and Liam McHale team. They went through U12, U14, U16, Minor and U21 and won everything. This bunch of players came into senior training and there was one defining day I remember. Terry Reilly was over the team and

John Kenny, we were playing Islandeady in the senior championship up in Islandeady and the team that they put out that day was basically the U21 team that had won the county title. The rest of us were left sitting.

“These were quality lads. You could see it in training. They had the shoulders back with a bit of confidence because they were winners. To see that team come from U12 and now playing senior football must have been a great feeling for Terry and John. I always remember that day fondly even though I was a bit vexed I wasn’t playing! The training got better and Stephenites went on to win the senior championship in 1985. All those lads who had come up had won every county title going,” said Brendan.

The conveyor belt of talent kept coming and in 2005 Ballina captured an All-Ireland Club title with a team packed full of homegrown heroes.

“All those lads came through the ranks. And it is happening now again. Jack Irwin, Frank Irwin, Conor McStay, the three Tighes, Sam Callinan, are coming in the next lot,” said Brendan.

Swanee lights up when discussing his playing days in the green and red of the Stephenites. There was success on the field but also some great times off it.

“We had what we called the ‘Skip car’. Brian Williams, who was from Galway originally, came to work in Asahi and played with us. He had the skip car. So a certain group went into that car going to matches. It was a Toyota Celica, a real sports car. That car didn’t come home. If you went into that car you wouldn’t be seen until one or 2 o’clock on Monday morning!

“You’d never go home after a match. You might play poker, have a few drinks and a sing-song. I remember playing down in Belmullet – Eddie Shevlin, who used to work for the Western People, he loved the Stephenites. When we played in Belmullet there was no home.

“We would play in Lacken and that was a real family day out. It was very hard to beat them in what we used to call the rush field. Then it was all down to Bessies after the match. It nearly always used to be a Bank Holiday when we played them and there would be a barbeque and a rake of mackerel. The craic would be ninety. Maybe we were doing too much of that but we ended up with two county titles (1985 and 1987) anyway!” 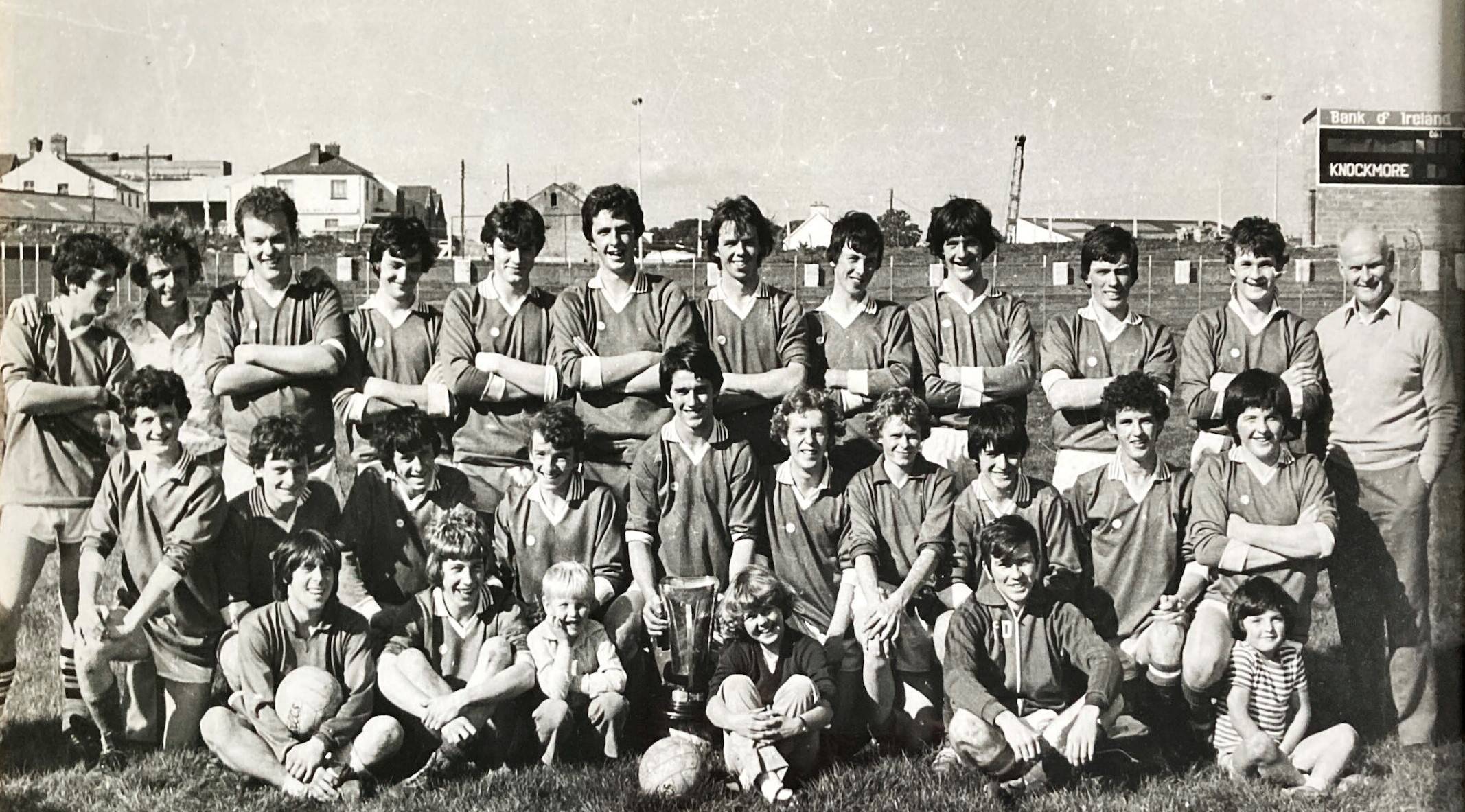 Brendan remembers that Kevin McStay sealed the 1985 county title with a kick that was a precursor to Seanie O’Shea’s All-Ireland semi-final effort for Kerry this year.

“It was Ballaghaderreen we beat in the final in ’85. It was the most unusual final ever. We only scored two points. What Sean O’Shea did for Kerry against Dublin, Kevin McStay did for us with the last kick of the game, 55-yards out against the breeze,” recalls Swanee. Ballina finished with a score of 4-2 to capture the title.

Brendan continued to play at senior level until he was almost 40 and in his 60s even came out of retirement when the junior side he managed found themselves a player short.

“I played a junior match a few years ago. I was managing the team, we were stuck and I had to go in at full-forward. I won a league medal and it’s the only league medal I ever won!” he laughed.

Even as a young fella, Swanee was quick to help out when it came to anything GAA related. He had a short-lived career as a teenage referee and was even given a garda escort to games!

“I did a bit of a refereeing in my teens. I was at it when I was 14 doing underage games. When I was 16, the Kavanagh Cup was being played down in Culleens, hosted by Enniscrone GAA. Padraig Kavanagh taught me in the college. He was killed in a car accident when I was in second year. It happened the night he got engaged. He had a VW car, HEI 656, I will always remember it. He was killed down at the bridge at Culleens. That was a major blow to us, he was the loveliest teacher and a sportsman.”

There was a row with a ref when the memorial competition was due to be played and Brendan was drafted in.

“I was 16, how was I supposed to get to Culleens? But Sgt Joe McManus sent the garda car down for me. I was so young that people wouldn’t badger me on the pitch! There was a festival on there too so I got into the marquee for free, a few sandwiches and home again in the garda car with a few pound in my pocket!”

Brendan is often a familiar sight performing umpiring duties. The GAA have Hawkeye but Stephenites have ‘Swan Eye’.

“Mayo were playing Cavan in a challenge game. The referee was from Leitrim but he had nobody to umpire so I ended up doing it. Ray Collins was roaring at me ‘Do it right now!’ I said ‘Don’t worry, the Swan Eye is here!’ I do the line at league games for the club, do umpire, whatever is needed I like to get involved.”

Swanee’s son, Brendan Jnr followed in his father’s footsteps and starred for the club for many years. He’s delighted to see his son now taking on a role in underage coaching after hanging up his boots last year. “Brendan lives for the club too,” said his proud dad.

He also beams with pride when discussing his nephew, Mayo defender Padraig. Brendan said he always felt Padraig had what it took to line out for the county. 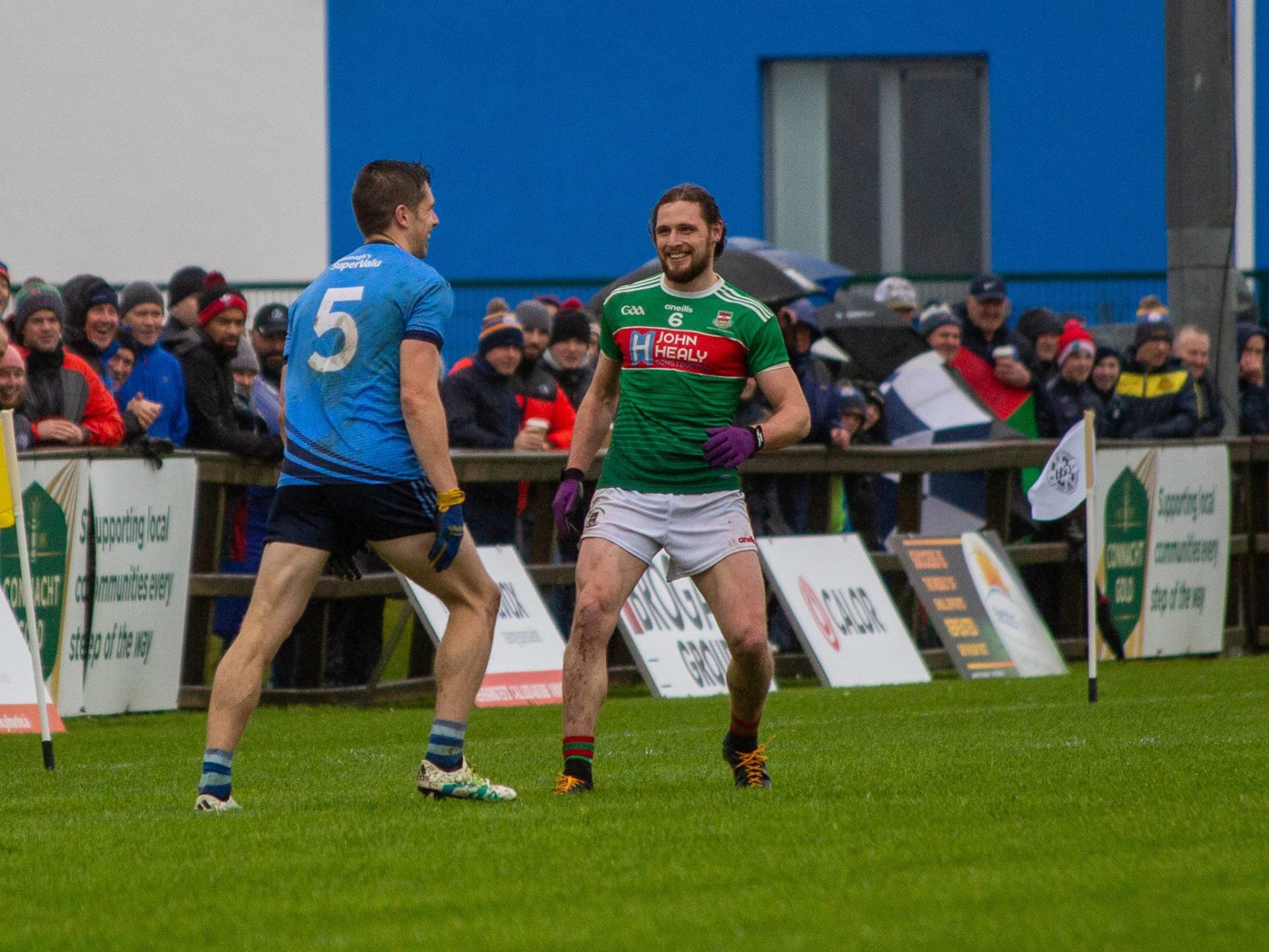 Mayo senior football teammates Padraig O’Hora and Lee Keegan were able to see the funny side of their coming together for Ballina Stephenites and Westport in last year’s Mayo SFC quarter-final. Padraig was a superb product of Ballina’s Bord na nÓg department having first appeared for his county in the 2011 Connacht MFC.

“He always had the attitude anyway! But in a good way,” he jokes.

“He was always a strong footballer. He always had that strength and that mental ability. He listens, which is a great trait to have. When he does something he does it right. He gives it 120 per cent.”

Padraig is one of the many O’Hora’s to have been passed down the Swanee nickname. The moniker has been passed down through generations after originating with Brendan’s father, legendary Ballina councillor, Gerald ‘Swanee’ O’Hora.

“He was ‘Swanee’ number one,” says Brendan. “My mother hated the name and I remember a fella called to the house one evening looking for my father. He asked her ‘Is Swanee there? I need to talk to him.’ My mother replied, ‘Which one? There are 30 of them!’”

The nickname came about after Gerald O’Hora got a tip for a horse called Swanee River which romped home to the delight of his neighbours.

“He got the tip down in Beckett’s Yard and he gave it to the neighbours and the horse won,” said Brendan.

He said the nickname still attracts the curiosity of locals and at a recent Mayo match a unique Swanee-origin story emerged!

“I was in town on Friday when this woman came up to me. ‘I want to know why you’re called ‘Swanee?’ she said.

“She told me her daughter had been at the Mayo game against Armagh and Padraig came on. She started shouting ‘Come on Swanee’ every time he got the ball. This fella said to her ‘Who’s Swanee?’”

The young woman looked at the man with incredulity before she responded: ‘Padraig O’Hora who plays for the Stephenites, Swanee! All the O’Horas’ are called Swanee. ‘But why are they called ‘Swanee’ the man deigned to ask.

“She turned around to him and told him, ‘It’s because they breed swans!’ I got a great laugh out of that anyway,” said Brendan.

Brendan sleeps, breathes, and eats Stephenites. “It’s a way of life being a part of this club. When you first went into the dressing room you got the sense that this is important. There are standards and codes you have got to keep. The club is so vital to the town,” he concludes with a passion.