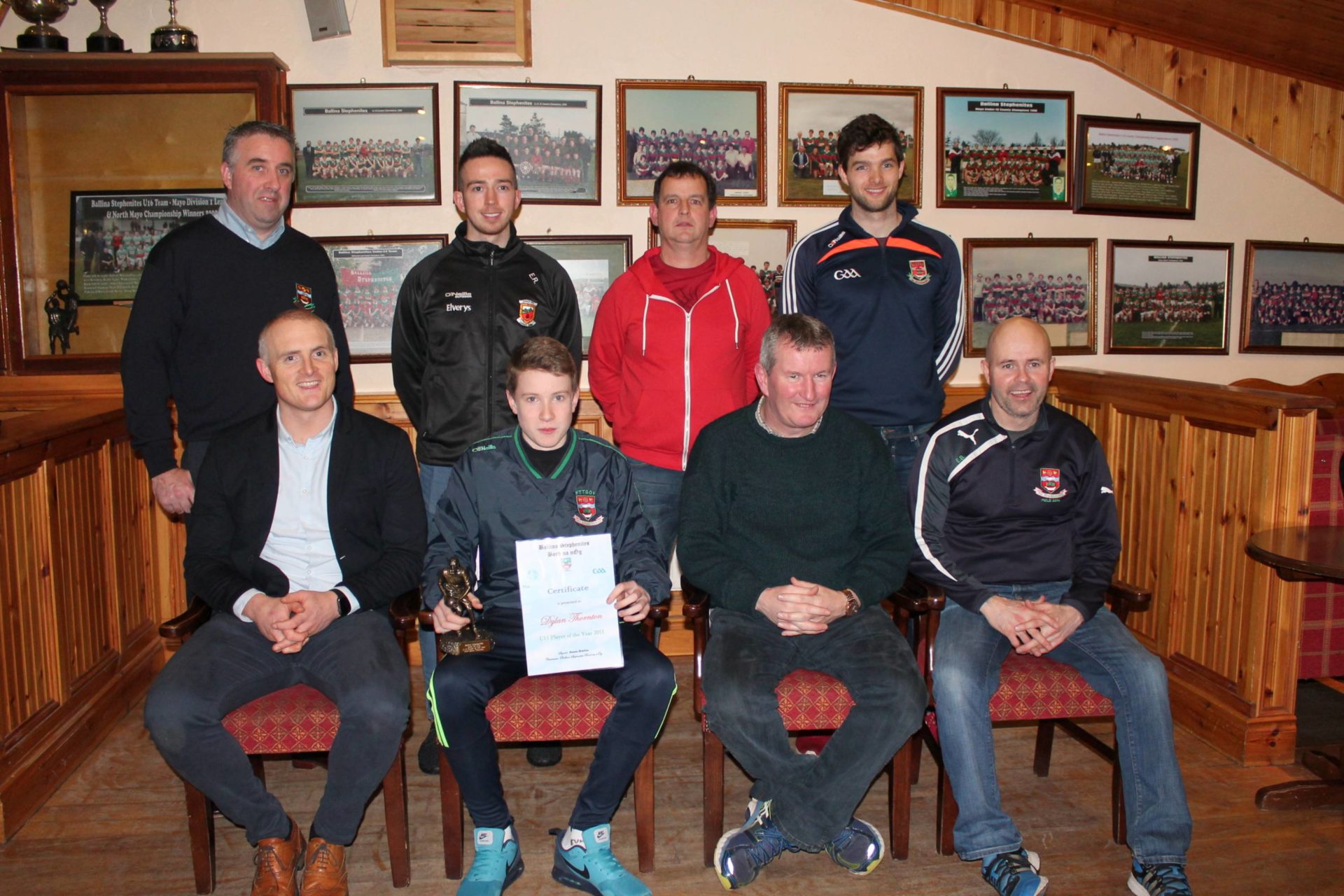 All-Star defender Ger Cafferkey has opened up on more than two decades of soldiering with Ballina Stephenites and how he believes he got ‘found out’ in his first senior match.

That testing and humbling game was in 2006 – just one week after tasting U21 All-Ireland glory with players such as Keith Higgins, Chris Barrett and Colm Boyle.

The 34-year-old, who reflected on his fruitful career with Ballina, also believes multiple sporting interests have sometimes given the Stephenites an edge over rivals.

Currently preparing to play in his sixteenth Mayo senior football championship, Ger is one of the club’s eight experienced senior players who have played with the Stephenites for more than two decades – and there have been lots of highs and some lows during an illustrious career.

The Civil Engineer, who spoke to the Western People to mark the 50th anniversary of Bord na nÓg, has fond memories of the ‘Town Leagues’ in his childhood years.

“One massive thing for me is I’m nearly 35 and there’s a massive amount of lads who are still playing senior football with the club who were on my underage teams. So, there’d be Stephen Mullins, Thomas Doherty, David O’Mahoney, Kevin Newell, Kieran Sweeney, eight lads in total still playing.

“We had a really good group and we got to the Under-14 Féile in Dublin, and we got the opportunity to play in Croke Park.

“It came across quite funny, we played Féile and we got beaten in the quarter-final but it turned out the team that beat us were playing overage players so they brought us back to play Fr Rocks of Cookstown in Croke Park to make up for that.

“Féile is a great competition and even though I don’t know if we ever won a county title, we used to be fairly dominant, we’d win every game bar the final for under-12, under-14 and under-16.

“It was great to go off and test ourselves. I think we might have played Corofin, Ballyboden St Enda’s, we played a lot of big-name teams from around the country and it was an unbelievable experience.

“I was a very, normal, average player and I was just playing corner-back on that team. All the superstars were the centre-back, midfielders, centre-forward, full-forward.”

How harsh that self-assessment is, it’s hard to know. But within a few years, Ger Cafferkey was the full-back on the Mayo minor team that qualified for the 2005 All-Ireland final and he was subsequently promoted onto the triumphant U21 team that went one step further in 2006. However, he remembers his first match for the Ballina Stephenites senior team one week after under-21 All-Ireland glory as a humbling experience. 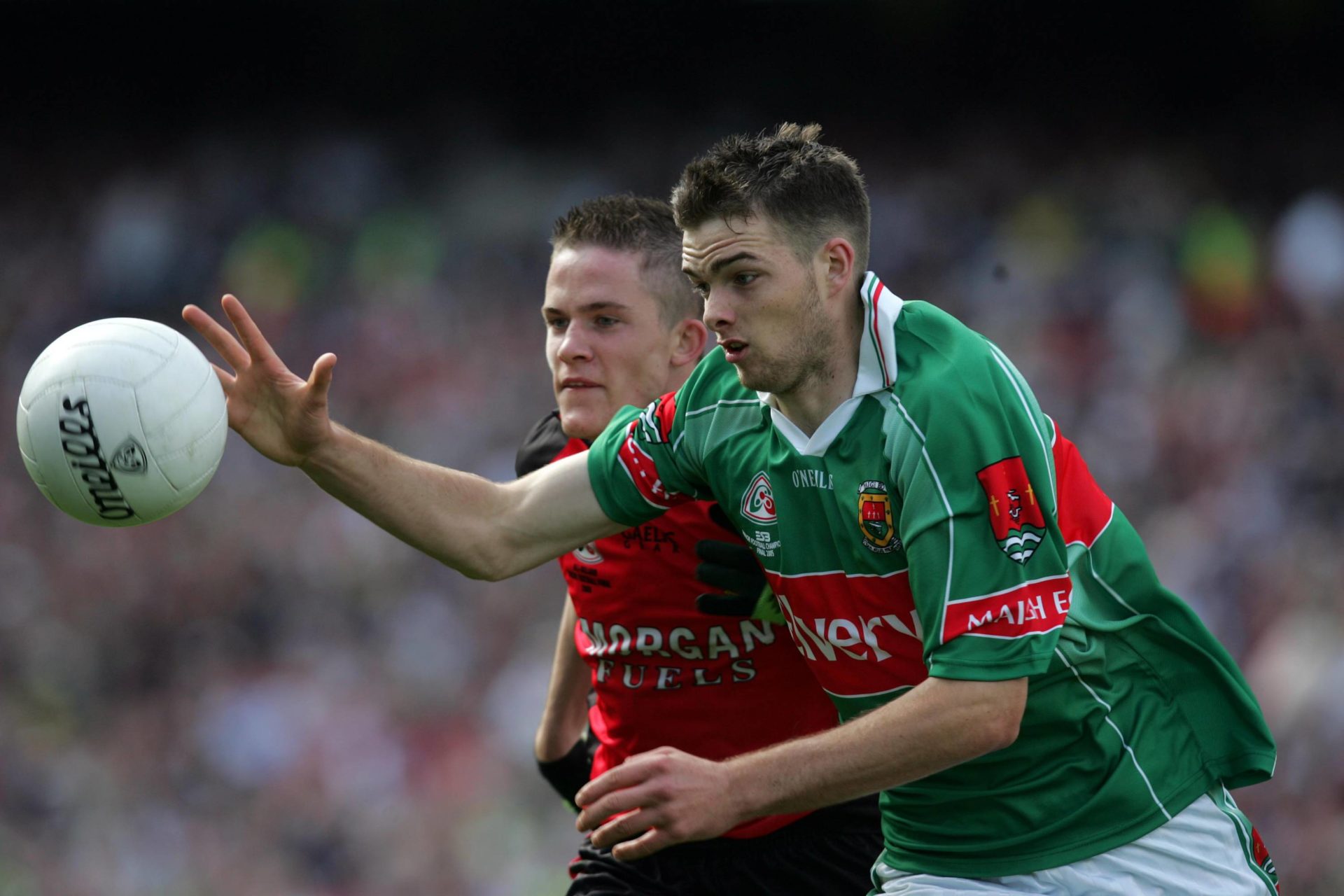 “I hadn’t even trained with Ballina and I got quickly found out in my first game.

“The guy I was marking came in and shook my hand and knew who I was and then he [knocked] me around the place.

“It was like the game was played at a different pace. Underage football was so much faster, like attacking space whereas senior football was a lot slower, hand-passey and methodical, and I struggled, I struggled big time.

“I remember Kenny Golden came over, a great corner-back, and I swapped places with him and I was a bit disheartened after the game, trying to figure out what just went wrong. He just said, ‘Don’t worry about it, it happens’.”

Ger sadly suffered a serious groin injury in the 2006-2007 season and missed an entire year when the Stephenites won county and Connacht titles. He made his senior debut for Mayo under John O’Mahony on his home ground of James Stephens Park in 2009 against Derry and he played for his county 104 times, winning six Connacht titles.

The talented full-back started the 2012 and 2013 All-Ireland finals and lined out in the 2017 decider, but he has a modest assessment of his ability as a youngster.

Ger said he has benefitted significantly from some good coaching and passionate GAA people with the Stephenites from underage level up.

“John Conroy and Seamus O’Dowd were my managers for the most part growing up, under-10s, under-12s, under-14s.

“I think I read somewhere Seamus O’Dowd once took credit for me sticking with football because when I was nine or something it must have been the cool thing to do, take a year out of football, I must have seen one of my older brothers or something do it.

“So I went up to Seamus and I said, ‘Ah yeah I’m just taking a year out and he drew a kick at me and said, ‘Get out there to f**k’. And yeah I’ve never thought about stopping playing football since really.

“I had TV Loftus and Daniel Kilgallon for a while and JJ Barrett, who at that stage I think took every minor team.”

He insists the popularity of a diverse range of sports in Ballina such as basketball, rugby and soccer has been a big advantage for the Stephenites.

“The great thing about Ballina is the range of sports that are played. And you could see that on the Gaelic pitch where certain lads would do certain things that you don’t see anywhere else. Because there were lads coming back from playing basketball, rugby, soccer and you can see their influences of what they can do on the pitch.” 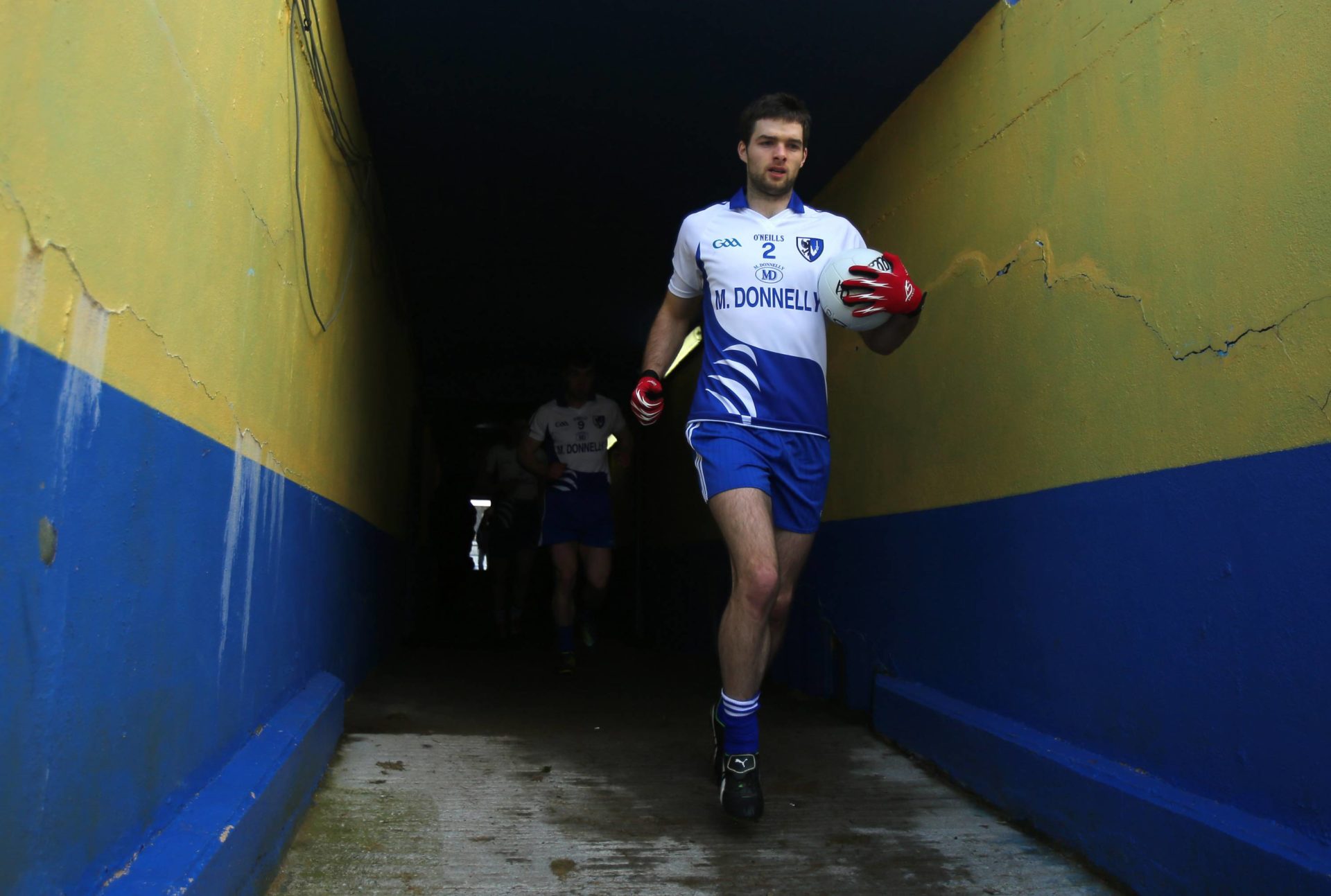 Ballina’s Ger Cafferkey leading out the Connacht team ahead of their clash with Leinster in the semi-final of the Interprovincial SFC (formerly the Railway Cup). Picture: INPHO/Cathal Noonan

Perhaps, surprisingly, for such an accomplished and successful player Ger said he has never been completely consumed by Gaelic football.

“But, I was a bit of a nerd. I used to play computer games and stuff like that.

“I was with the Mayo under-16s and I didn’t play all that much, I was starting but I wasn’t and then I played minor and started minor and I played under-21.

“I had already won an under-21 All-Ireland before I played a senior match with Ballina. It’s just the way it happened, the culture at the time was minor players did not play senior.

“I was minor in 2005 the same time Ballina was winning All-Irelands.”

Ger recalled how at under-10 and under-12 level there was a unique competition in the Ballina area that captivated young kids of a similar age.

“The Town League was massive as well, we used to have a town league in Ballina where the town was divided up into five or six teams. And before I played for Ballina at all I would have played with St Pats from the age of six or seven.

“I was a probably a year or two training before I played a proper match and there was United, Ardnaree, The Quay, Fitzgeralds and Celtic.

“It kind of fizzled out after me but if you talk to anyone, especially anybody older than me, the Town League was the competition growing up. Even now if I talk to lads who are still my age who are still playing football a lot of rivalries still come up.

“I remember marking Ciaran Sweeney in a town match in Scoil Padraig and there was a bit of jawing between us. But they were massive competitions and I captained the under-12 team when they won the Terry Casey cup.”

Ger, who was also an accomplished hurler growing up, recalled how it was more challenging to get the time to improve his skills in that area. He credits TJ Tyrell, a Galway native who moved to North Mayo and had a huge impact in increasing the popularity of hurling, as a major figure in the Stephenites’ history.

“He started a load of hurling around Ballina. But hurling underage with Ballina was difficult, my brother played a lot of hurling and he was part of successful underage teams and they had enough players to have teams whereas [at my age group] we struggled to get lads together.

“There were years where we were joined up with Belmullet for a North Mayo team.

“There’s some great guys in the club but probably not enough players my age to have proper teams.”

“I came into a team with some very protective people. So, I remember being a young lad, very skinny, but I was in a very experienced back-line with Jimmy Devenney, Kenny Golden, Colm Leonard and they’d offer you a lot of protection.

“I think one day I was getting a bit of abuse and all three of them came across my man, hit him a dunt and basically said, ‘You don’t hit the young fella’.”

The Mayo GAA stalwart also revealed how he and more senior players try to help with one-on-one training with the younger generation.

“Only [Wednesday] night at training I was talking to some of the younger lads, and I was saying, ‘We need to learn each other’s games’ and ‘I need to know where you’re going to be’.”