Frustrated and  disappointed parishioners in Straide have written to the Bishop of Achonry Paul Dempsey and asked for an urgent meeting about the prospect of losing their parish priest.

A second public meeting took place on Tuesday night at St Peter over the decision to move the current PP, Fr Martin Convey to Cooloney, Co Sligo from September.

More than 70 concerned people gathered at St Peter and Paul Church to air their grievances and discuss the current situation. 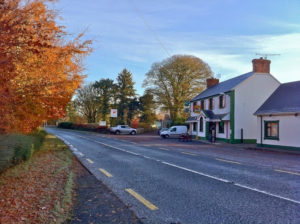 There was huge shock when parishioners were told on July 10 they were losing their priest due to the impact of decreasing vocations.

Kathleen Canning, a member of the local parish council, said: “He [Bishop Dempsey] was giving his sermon and he was talking about good samaritans and all of a sudden he started talking about the shortage of priests.

“And he said when it comes to appointments bishops find it very difficult and that’s the reason he said he was sending our Fr Martin to Cooloney as PP.

“And since that we’ve had a meeting with him but he has made the decision and there was no giving.

“So we came back to the people of the parish [Tuesday] night and the fight has started.

“Where we’re at now is trying to get him to come and meet us, the parishioners.”

Kathleen said an email had been sent to Bishop Dempsey requesting that he attends a meeting in Straide early this week.

She believes about 100 people would have attended the public meeting, however, dozens of locals were also attending the funeral of former primary school principal TJ Smyth.

Kathleen referred to how earlier this year Pope Francis had spoken about how listening is an indispensable first step in human communication to mark World Day of Social Communications.

“And we still don’t know what’s going to happen, only that we haven’t an administrator, that’s all.”

Kathleen said the parish of 200 houses raised more than €400,000 between March 2020 and March last year to repair the roof of the church and other essential maintenance work.

“How many other parishes within the diocese have given this level of commitment to the church.

“Was it all done in vain?

“Certainly it was done on the understanding that we would continue to have a resident PP.” 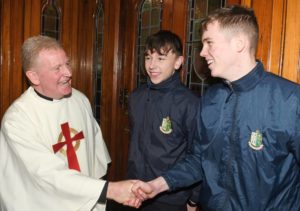 Oisin Regan and Jamie McCoy, pupils from St. Nathy’s College, Ballaghaderreen congratulate Fr. Paul Dempsey after it was announced in January 2020 he was to become the new Bishop of the Diocese of Achonry. Pic. Mick McCormack

“The PP in Cooloney, Fr Peyton retired but there is a curate in the parish and I know he’s elderly but he’s working.

“And I know that there are three elderly priests who are retired in Cooloney.

“They don’t want the responsibilities of the school and the administration but they help out otherwise.

“Our thing [idea] was if Fr Martin could help and do administration even from Straide as PP.

“If there’s three retired priests up there and a curate surely to goodness they have enough for mass.

“That’s the line we went with, we’ve been trying to come up with solutions to hopefully change the bishops mind.”

Carving out a place in the artistic world