A planning application to convert a pub into a meat processing plant in an east Mayo village has been refused by Mayo County Council.

The local authority received submissions from more than 570 concerned local people in Tooreen, outside Ballyhaunis who signed a letter outlining why they were opposed to the proposal.

The planning application for the ‘food processing hall’ had been lodged by businessman Fadi Kezze through Waldron and Associates solicitors on June 17 last.

The Ballyhaunis-based developer had sought approval for a “food processing hall, an effluent treatment and percolation system together with all ancillary siteworks and services”. 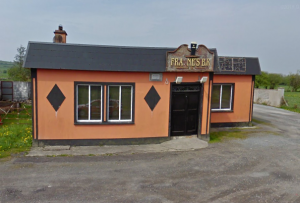 The former Fraynes Bar premises in Tooreen where the ‘food processing hall’ would have been located if planning approval had been approved.
Photo: Google Maps

One local man, who did not wish to be identified said locals got confirmation the application had been refused last week.

“I would say the dominant word is relief.

“There’s no great celebrating going on, it felt like the wrong thing in the wrong place really.

“So, it’s just a relief that from our point of view common sense prevailed and the council saw fit to refuse the planning permission.

“I forwarded you on the letter [of opposition].

“[There were numerous issues] everything from proximity to the nursing home, to houses, to issues with effluent discharge into the groundwater, concerns over that, noise pollution, air pollution and traffic, it’s straight onto an N[83] road and on a corner and off a small junction so there was loads of problems with it.”

Local residents had until July 21st to lodge their submissions with a huge response from people against the development at the site of the former Freyne’s pub.

The developer Fadi Kezze runs Fadi Casing & Foods Limited -a meat production business – which was set up in February 2016 and operates out of Ballyhaunis.

It’s understood there were no changes or extension to the existing1,600 square metre structure of the old pub premises planned.

The local community held numerous public meetings in recent weeks with dozens of residents attending on each occasion.

In the letter that was sent to Mayo Co Council, the residents stated that the village consists of a church, a national school, a prominent hurling club and grounds, the Ave Maria Nursing Home and a community centre, incorporating a preschool service.

“We feel that this proposed development is out of character with the rural village ethos and furthermore would strain the already fragile resources in the locality.

“There are many community facilities within a 500-metre distance from this site that would be adversely impacted by this facility should odour become an issue.”

The letter also stated that no road traffic management plan had been submitted and the entrance to the site on the N83 was completely open and dangerous with no details on planned improvements.