By Mark Higgins
Amidst all the sound and colour of the All-Ireland final last Sunday, in the rituals and traditions that decorate the biggest day in Irish sport, it was hard not to feel as if something important was missing.
The minor final, for generations the curtain-raiser and pre-cursor to the senior decider, was not played. Neither was the minor hurling final played before the senior hurling final seven days earlier. 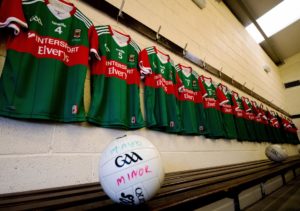 The Mayo dressing-room at Dr Hyde Park in Roscommon before the recent All-Ireland minor football final between Mayo and Galway. Picture: INPHO/Evan Logan

It was a bit like sitting down to a dinner of roast beef without having tasted a drop of soup beforehand; not enough to spoil the meal by any means, but a significant element of it whose absence wouldn’t go unnoticed.
The GAA has already surrendered a lot of the traditional aspects of All-Ireland finals, most notably by moving them forward to July, and the absence of the minor finals as curtain-raisers is another layer of that tradition peeled back. Even from a television perspective, the coverage of the minor final with the iconic commentary as Gaeilge of Michéal Ó Sé was, up until recently, an important part of the routine of All-Ireland final day for those watching at home. Instead on Sunday there was an hour-and-a-half of senior build-up on RTÉ, a period of previewing the game slightly longer than the game itself.
The separation of minor and senior games is something the GAA has phased in gradually and without much publicity. The last year in which minor and senior All-Ireland finals were played as double-headers was 2019 and it seems as if the power-brokers in Croke Park have taken the opportunity of Covid as a sort of cover for implementing the change.
And it’s not a policy confined to All-Ireland finals either. Over the course of the 2022 season, as best we can make out, there was only one game in the entire minor football championship played on the same day and at the same venue as a senior game. The lone exception to the new unofficial policy was the Ulster minor final between Tyrone and Derry, which was played as the curtain-raiser to the senior final between Derry and Donegal in Clones on May 29.
This year’s All-Ireland minor finals were both played as standalone fixtures. There were some mitigating circumstances in the decisions to stage both games on their own; it made sense to keep the Mayo vs Galway football final within the confines of Connacht, and Hyde Park was the right choice for that game, while the hurling final between Offaly and Tipperary drew a phenomenal crowd of more than 27,000 to Nowlan Park in Kilkenny, an attendance which would never have been possible had the game been staged before a senior final in which neither county was playing.
The theory behind the unofficial policy seems to be that asking minor footballers to play big championship games as warm-ups to senior matches, in front of big crowds in venues like Croke Park, is placing too much pressure on the shoulders of young players. Standalone games in smaller venues are considered more suitable.
You could argue whether that logic holds much water when crowds of 27,000 people are turning out for minor hurling finals — a healthy 12,800 turned up in the Hyde for the football final too — but the theory does make at least some sense. The question that needs to be asked is whether reducing the pressure on players is a reasonable trade-off for breaking with long-standing tradition, not to mention denying the young players themselves the chance to play at Croke Park.
Tomás Morley was the manager of the last Mayo minor team to play at Croke Park. His team won the Connacht championship in 2019 and defeated Dublin in an All-Ireland quarter-final before taking on Cork in the All-Ireland semi-final, at Croke Park, as the curtain-raiser to that year’s All-Ireland senior semi-final between Mayo and Dublin.
Kiltimagh clubman Morley said that while there are undoubted benefits for young footballers in being allowed to play at Croke Park, players at the under-17 age grade are probably slightly too young to be expected to perform on a stage so big. The crux of the issue, argued Morley, is that the change in the minor age grade from under-18 to under-17 hasn’t really worked, and needs to be reversed.
“When you go to Croke Park, it does add a huge amount of pressure. People talk about pitches being the same size and all that but it is different. The whole aura about it is different,” said Morley. 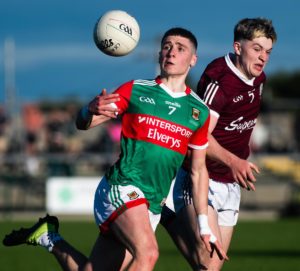 Morley, whose dual role as an underage manager and a professional counsellor places him in an ideal position to speak on the issue, had a nuanced view: on balance, minor finals should be played in Croke Park, he reckoned, but back at the old under-18 grade, not at under-17. That one extra year may not seem like a huge distinction but an extra 12 months of physical and mental maturation can make a significant difference.
“The idea of underage is supposed to be about development, particularly in terms of skill-sets. When you introduce competitiveness into it, you have to change what you’re doing,” reasoned Morley.
“If we were to focus on developing players from an early age to get to senior level and have a crop of four or five coming through every year, we would be doing things differently. Take out the competitiveness from it and you get development.
“As it is now, you’ve got a 16-year-old, maybe only barely 16 years old, being asked to do things at a really high level while they’re going through changes in their own bodies, mentally going through an awful lot.”
When the minor grade was reduced from under-18 to under-17 at GAA Congress in February 2016 — it came into effect at the start of 2018 — one of the main reasons cited was avoiding a clash with the Leaving Cert. But more and more pupils are now sitting their Leaving later, in the year in which they turn 19, rendering the argument less relevant than it was six years ago.
There has been talk that the GAA are considering reversing the move and bringing the minor grade back to under-18, the tacit acceptance being that the switch, while undoubtedly well-intentioned, hasn’t really worked out as well as it was hoped. Whether that U-turn would bring with it a return to minor games being played before senior games is as yet unclear.
The key question is this: what precisely are we protecting them from? Pressure isn’t a bad thing in and of itself. Some people, in football and in all walks of life, only produce their very best when the pressure is at its highest. And if we want young players to go on and grow into seniors, maybe it is a good idea to get them acclimatised to playing on the biggest stages at an early age.
And then there are the voices we never, ever get to hear in discussions about underage football; those of underage footballers themselves. Not all of them would prefer to play at Croke Park but it feels safe to suppose that the majority of them would.
Is it fair to deny young players the opportunity to play at Croke Park once they have earned the right to contest an All-Ireland final? Especially when, to be realistic about it, the majority of players on a given minor team won’t ever get the chance to play for their county at Croke Park again.
Tradition alone shouldn’t be enough of a reason not to make a change, when that change is for the better. The GAA has been proactive in its experimentation with the minor grade over the last few years, and that deserves credit. But the most courageous thing of all for the power-brokers at Croke Park to do might be accepting that the old way of doing things was the best way all along.