Carving out a place in the artistic world 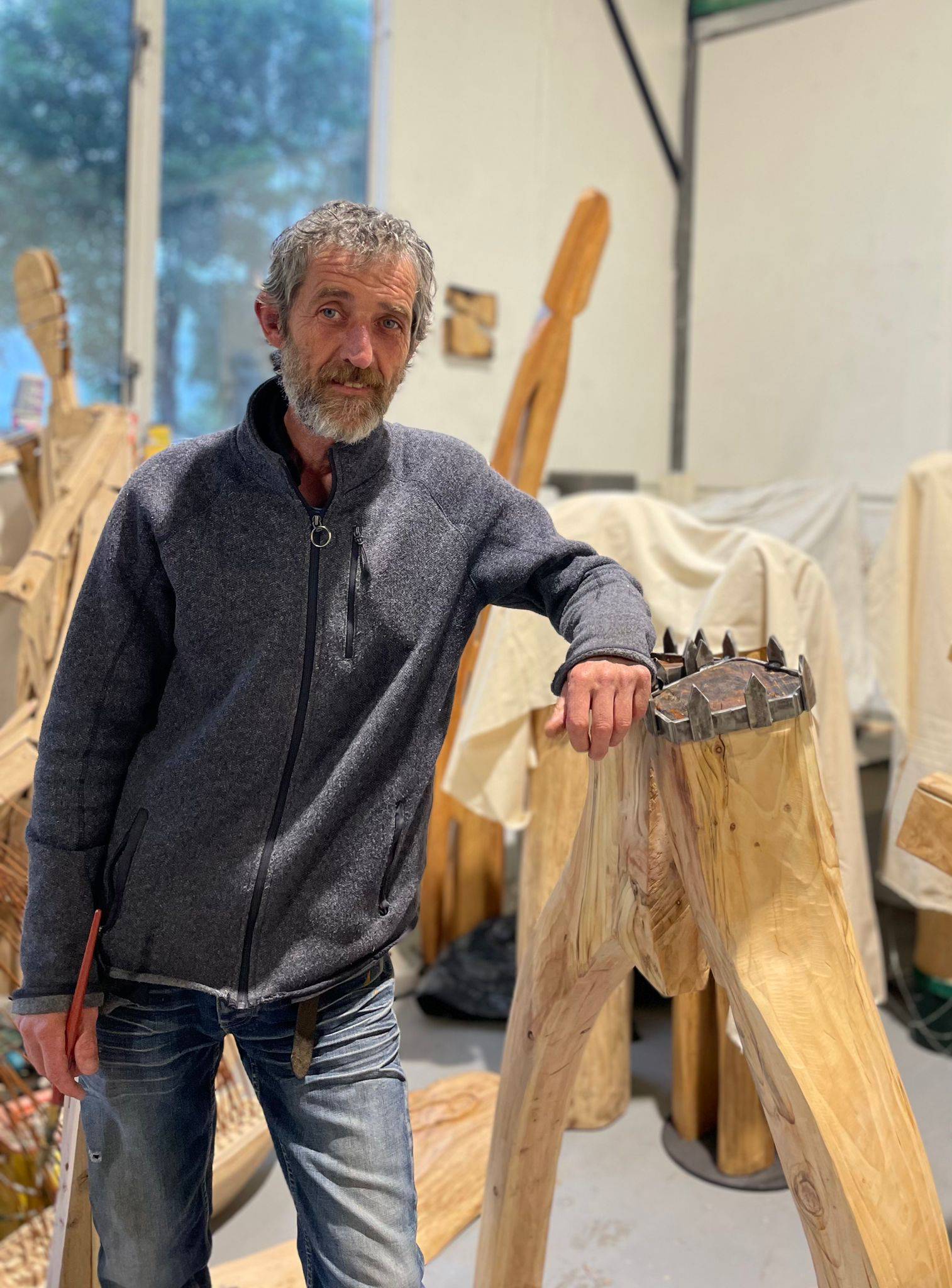 The artist Mick Smyth in his studio with his sculpture ‘Where Kings Come to Fight’, carved out of a block of Douglas fir.

A dramatic and fascinating exhibition of new sculptures carved and created by Straide-based artist Mick Smyth had its official opening on Friday, hosted by Ballina Arts Centre at the Civic Offices gallery.

The evocative, largely human images are carved from solid blocks of wood – trunks of toppled trees and fallen branches, ash, sycamore, birch, beech – all of which Mick has been gathering for the last ten years from the garden and fields around his home in Blanemore, Straide.

He has also been collecting old and vintage tools, many handed down from his uncle, and that has been another slow preparation for the journey ahead.

“I’ve been planning this project for a long time,” he says, “without knowing exactly what or when I would start. I just knew I wanted to make something with the wood, I’d see a piece and think ‘that’s a good one’, I’d know there was something in it.”

Mick was raised where he lives now, and it feels natural to him to create his work from the organic fabric of his surroundings.

“The exhibition is called Mesh,” he explains, “because of how everything is connected, interrelated. The whole world is a mesh, basically.”

He has worked in the arts for some time and is currently the co-ordinator of Mayo Artsquad, a community arts project for the county. His own work up to now has been a series of small projects, one-offs that he could fit into the time and space available. But with lockdown, things changed. 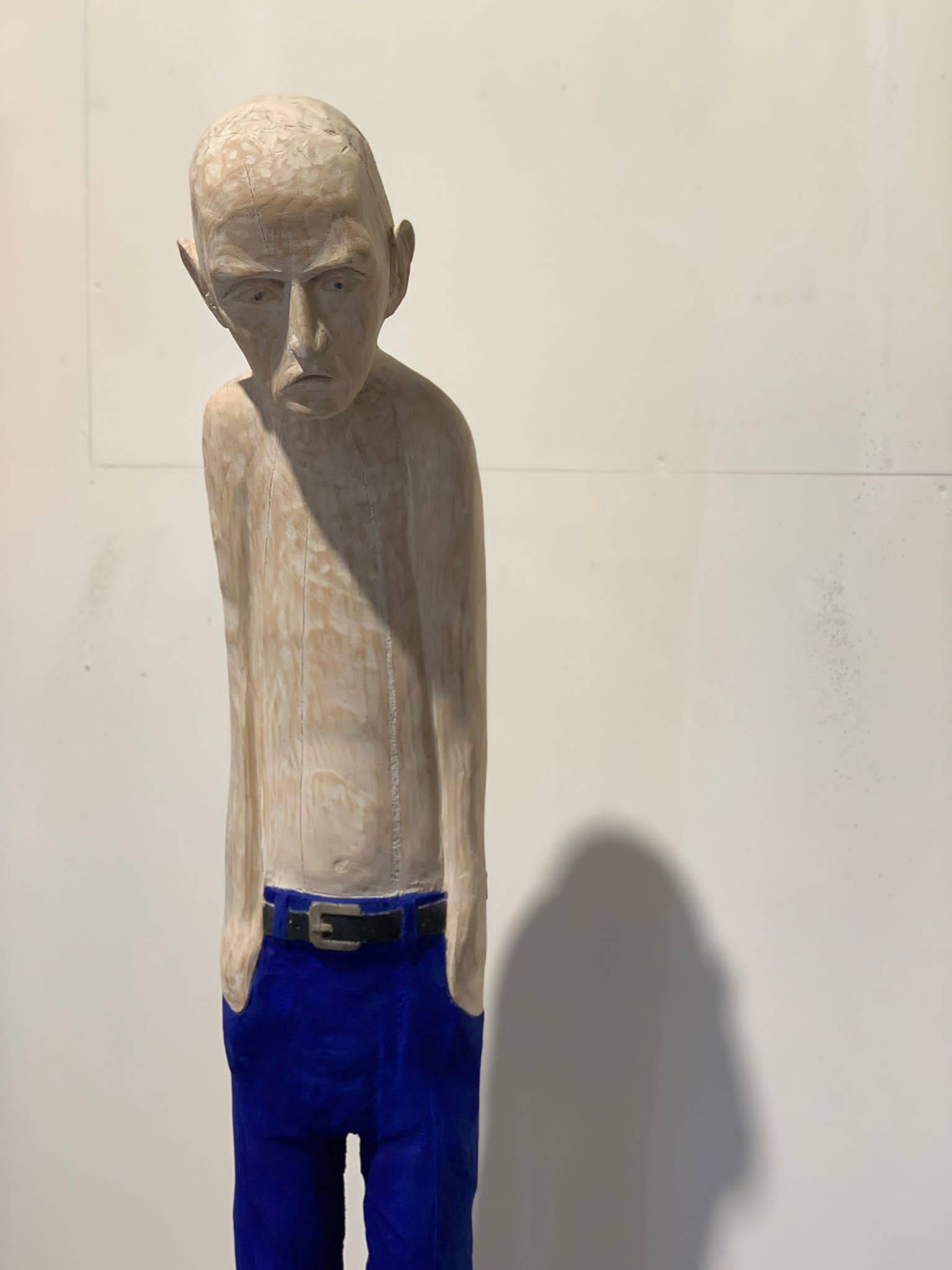 Looking for dignity: This is a man who is questioning and marginalised, left behind by society.

For a start, he was able to embark on a project which “I’d been thinking about for twenty years” – that is, with the help of “the young fellow”, his son Kienan, he converted a large but broken-down shed into a light-filled, weather-proof studio.

Here he finally lined up all the wood he had gathered over the last decade, picked up his inherited tools, and began the real heavy work, digging down to the figures hidden in the wood.

All Mick’s sculptures are carved out of a single rough block, and he enjoys the nature of found wood.

“A lot of the time there’s a basic shape or form you can follow, and then as you get deeper, a natural blemish in the wood might turn you another way. The trick is knowing where the finishing point is, knowing where to stop and leave it alone.”

He also loves how the finished sculpture, smoothed and polished with bees wax, continues to change over time, drying and dimpling with maturity, exactly like aging human skin.

Mick, whose father was a farmer and truck driver and whose mother was a homemaker, always had “a grá” for art and his parents were supportive of his interest.

“My mother would have been creative, she was always making decorations for the house, always trying out different things. And my father’s view on life was once you have your health and a bit of happiness, go do what you have to do.”

He realises now that he absorbed the basics of his art from the people of Blanemore themselves. Nobody around him considered themselves to be “artists” and yet, says Mick, they were all “makers”, whether makers of their own butter in little milking parlours, or makers of what they needed on the farm.

His neighbour, Pat, “was a natural teacher, always designing tools, always creating something”.

“I learned a lot from him – how to shape a piece of wood, making it useful – he would have opened that window for me, I could see how you could transform a piece of wood or a length of wire into whatever you wanted or needed.” 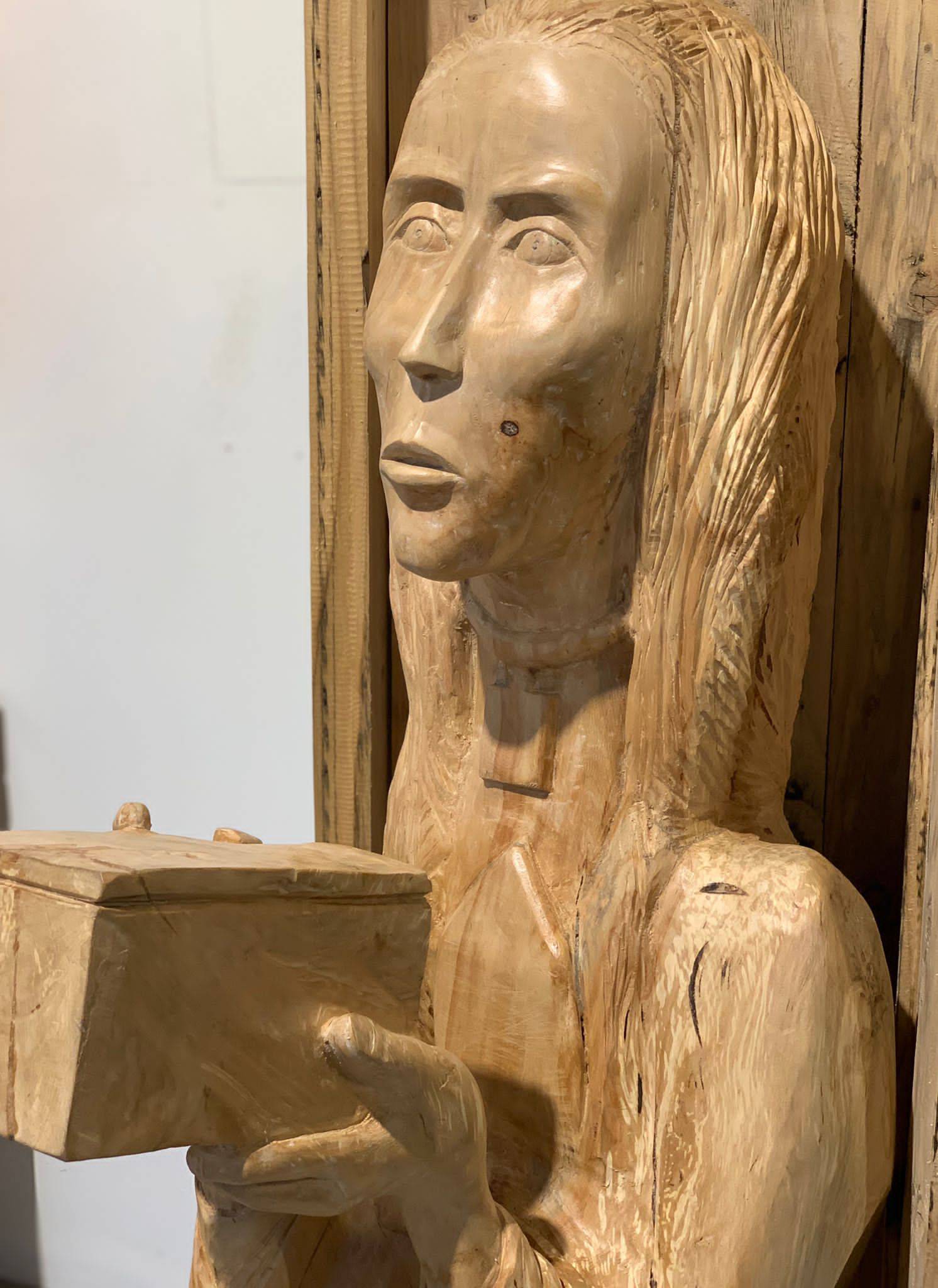 The Box of Tears: The woman holds out a sad little box, in memory of the Tuam babies.

He also recalls the amazing single-minded resolve of his uncle’s father, who spent a whole day running to and from the kitchen range to the garden with a red hot poker, using it to bore a hole through a felled telegraph pole which he wanted to use for something.

“He got there but it was a major undertaking.”

There were other forms of art as well, like music, both from his mother’s family and also because “there were so many good musicians in the area, Foxford, Knockmore, Ballina, the sessions in the pub could run from straight after Sunday morning Mass to 11.30 at night”.

Mick was in a band himself, called Gypsy Moth, which people might remember!

Despite his ambitions, Mick didn’t go to art college after Leaving Cert – “that avenue wasn’t as accessible as it is nowadays”. His first paid job was in Gavin’s shoe shop in Ballina. After that, there was construction work and then work as a gardener’s labourer in, of all places, Luxembourg.

“My partner, Kate (now his wife) had a cousin who knew the gardener…”

Throughout all this, he made time for music and art.

“I was always dong little bits,” he notes.

And then came a transformative moment: he got another job in Luxembourg, this time working with a screen printmaker (Francis van Maele, who now runs RedFoxPress in Achill). He learned how to make hand-printed books and posters, which taught him colour theory and introduced him to a range of interesting people involved in the arts scene.

By the time he and Kate came back to Ireland a few years later, Mick was determined that his next job would be in the arts. In Dublin he found work with the VEC, working on a project to engage artists in community settings, which involved both his passions – art and connection, the “mesh” that is the world.

And he loved Dublin back in those days – the old, relaxed Dublin before the Celtic Tiger hit.

“I remember near the Ha’penny Bridge, seeing an old woman meet an old man in the centre of a zebra crossing, and while the few cars waited, they nice and steadily held their conversation until they’d finished what they had to say, then went on their way.”

A few years after that, the boy from Mayo returned to his roots and raised his own family in Blanemore, in the old stone house beside his family home; the house that had once belonged to his creative neighbour, Pat.

For Mick, art is a dialogue, first between the artist and his material, then between the finished work and the viewer “after which the artist no longer has any hand, act or part in that conversation”. He likes questioning – “not everything is black and white, we need genuine debate” – and thinks we need to connect because we are all in this together. One piece made of ash is provisionally entitled Looking for Dignity and reflects being marginalised and left behind; another, carved out of a solid block of ordinary birch, The Box of Tears, is a work about the Tuam babies. Nothing he finds in the wood is meaningless, everything has relevance to something. The world is connected.

The world is a mesh.