‘Politics can be nice and smooth on the outside, but it mightn’t be inside’ 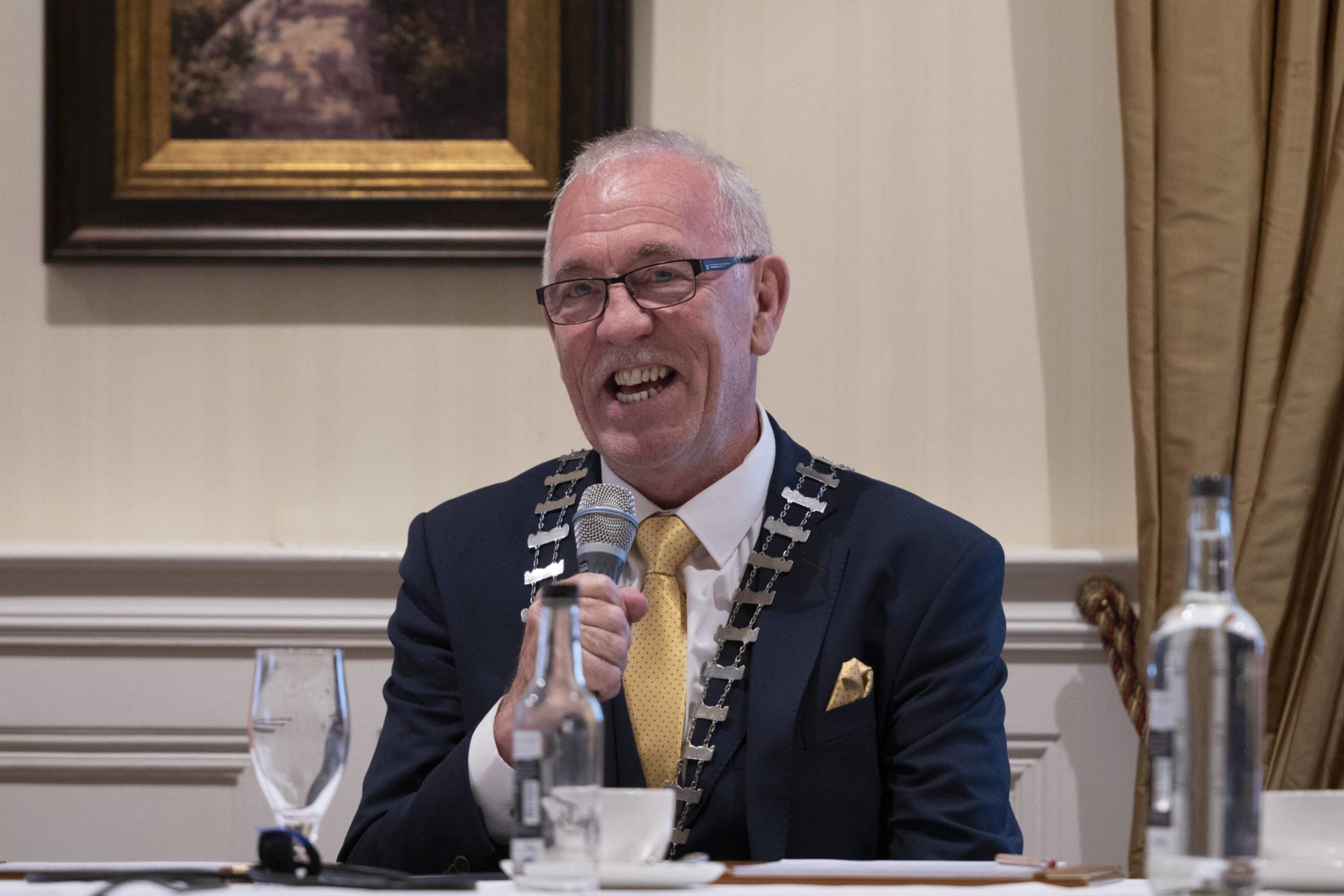 It has been an eventful 2022 for Knockmore man Seamus Weir who faced a serious health scare in spring before becoming Mayo’s first citizen earlier this month. He spoke with Trevor Quinn.

A significant health battle and a huge decision to leave the Fine Gael party over a divisive pylon issue are two events that have shaped the new Cathaoirleach of Mayo County Council, Seamus Weir.

The former Fine Gael councillor is steeped in his local community, but the threat posed by plans to build an overground power line led to him running as an Independent in 2014.

The renowned Mayo and Knockmore GAA footballer won five county titles and a Connacht championship as a player in the 1970s and 1980s, and a county and Connacht title as manager with Knockmore in 1992.

“I mostly played in midfield and occasionally in the forwards and I had a good career, and I was involved with some great players and people in management teams in Knockmore and Ardagh,” he recalls. 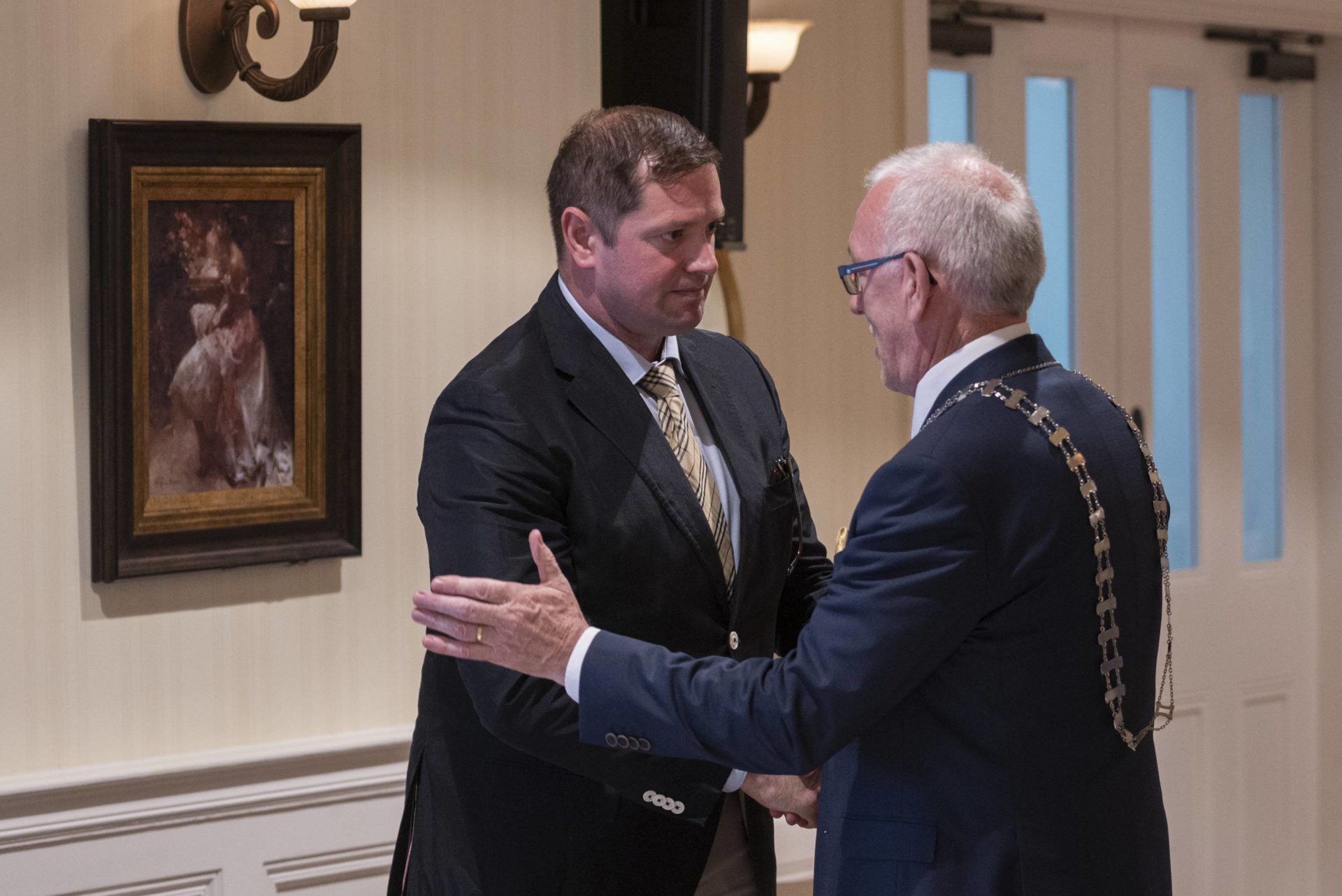 Seamus, who describes himself as being highly competitive on and off the pitch, was shocked earlier this year when a routine check-up led to major surgery for blocked arteries.

“I was going for my tests [in the Galway Clinic], and I went for an angiogram, and I was told I had two blockages and one of them was 90 per cent so it could have done damage. They told me they’d keep me in there and they did the job on me and that was grand.

“It was a shock to me, and I clearly think that we all should go and get ourselves tested. An angiogram is very important now.”

Seamus is thankful for the treatment he received at the Galway Clinic and he now feels fit and healthy. However, his own health scare coincided with the sudden death of a great friend in North Mayo, Pat Dowling, who was the former principal of Moygownagh NS.

“He was in his early sixties and a personal friend from the GAA, refereeing and he was the retired principal in Mowgownagh. He was a great community man.” 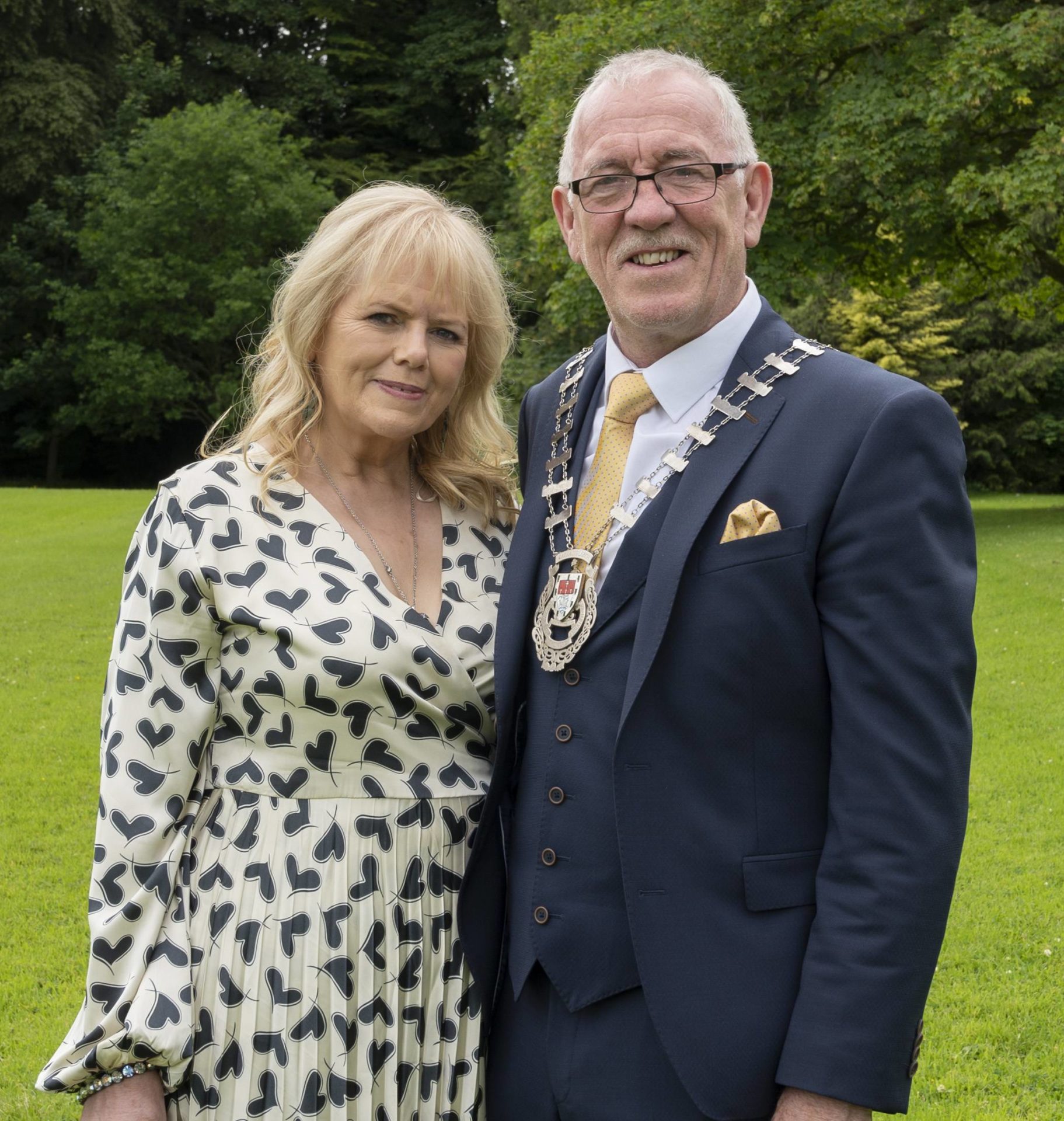 Cllr Seamus Weir with his wife Mary Frances after he was elected Cathaoirleach of Mayo Co Council.

Seamus became Mayo’s first citizen for a second time on July 1 last, having previously had the honour in 2007 when he was a member of Fine Gael. He was joined at the council’s annual general meeting at Mount Falcon Estate in Ballina by his wife Mary, daughters Yvonne and Tara, son Ronan and grandson Harry.

Becoming Mayo’s first citizen is another milestone in Seamus’ long political career, but it hasn’t all been plain sailing.

“Politics can be nice and smooth on the outside, but it mightn’t be inside sometimes. You have to be competitive… and every day you get up in the morning there’s a phone call [from a constituent] and if you don’t get back to them, they’re giving out.”

Cllr Weir fondly recalls being persuaded to join Fine Gael by Paddy McHale and the late Michael Faughnan in 1999 and said he still has close friends in the party.

He started working as a mechanic as a young man before moving on to the electrical sector. He was subsequently employed for 16 years as an instrument technician with the Asahi fibre plant in Killala and has had a successful and varied working life.

He now works as a dry-stock farmer and suggests walking down the fields and spending time with his animals helps him to unwind and relax.

“I enjoy it because I can go down the fields and it’s an escape.”

One of the most challenging periods of Seamus’ political career occurred over tensions with some Fine Gael colleagues over pylons and a section of the Grid West project. He recalls how a section of the proposed 130-kilometre overhead power line from Mayo to Roscommon was set to pass through Knockmore.

“It was coming right through Ardagh, up through Knockmore and they’re 400KV and here in North Mayo we have lovely scenery, and we depend so much on tourism. I never said we were against progress, but there was a massive revolt in the parish and there was a public meeting with 700 people.

“It was shocking, and they (the power lines) were passing right beside five or six primary schools.

“I didn’t get a good reaction and when I used to go into my own local Fine Gael meetings, I felt totally left out in the cold.

“I had a team built up for the underground [proposal] and I was the founder of a local anti-pylon group.

“The local elections were coming up in May 2014. When there’s an election you have to go and sign allegiance to the party and you’re signing for their policies and my gut feeling was I can’t go there. They wanted me to run for Fine Gael in the election, but the locals said they weren’t going to back me.”

Seamus took the difficult decision to leave Fine Gael and run as an Independent, a move that was vindicated when he was comfortably re-elected to Mayo Co Council. He retained his Independent seat in 2019 despite losing a large part of his old constituency in Foxford.

The new cathaoirleach has prioritised the delivery of housing and improving the health service as key targets during his 12-month term. He is also keen to ensure progress is made on the N26 Foxford to Ballina Road and the new ring road in Ballina.

He said becoming an Independent was positive in terms of freedom, but it was also difficult as you are essentially ‘on your own’.

The political stalwart listed Knockmore Community Centre as his greatest achievement back in the early 2000s.

“We had no centre really and it’s there to be seen now, it’s fabulous and there are lots of activities.

“We had hard times, but I set up an ad-hoc committee and we took it on. But it nearly broke me mentally because I was the coordinator and building it at the time.

“The council stood by us and there was a lot of community development fund money, €500,000 given out at the time by [then County Manager] Des Mahon.

“We built the recreation area of the centre and there was an outcry that we didn’t have a sports part and I had to go back again, and we built that.

“I worked with some outstanding groups and committees on community projects.”

Seamus was also actively involved in the Knockmore village enhancement and cites the upgrading of the public water system in 1999 as another massive development.

He is also delighted to be able to represent the people of Ardagh where he played GAA, and to give a voice to issues impacting Ballina town.

Being a grandfather to Harry brings the public representative a lot of joy and happiness and he is enjoying babysitting duties.

“It’s wonderful to have that quality family time.”

He is looking forward to a busy year as Mayo’s first citizen.