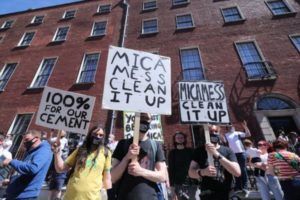 Mayo pyrite homeowners have been left devastated after the county’s three Government TDs voted in favour of the Defective Block Compensation Scheme in the Dáil.

Last year, the Government agreed to provide up to €420,000 to affected homeowners, but campaigners fear that many whose homes are riddled with pyrite and mica will remain “tens of thousands of euros” short of full redress.

The Defective Concrete Blocks Bill passed through the Dáil last Wednesday night by a margin of 71 votes to 67.

Sinn Féin TD Rose Conway-Walsh was the only Mayo TD to vote against the bill, with Dara Calleary, Michael Ring, and Alan Dillon all voting for it. The Government lost its Dáil majority after Donegal Fine Gael TD Joe McHugh rebelled against his party and voted against the scheme.

Homeowners from Mayo and Donegal were in tears in the public gallery of the Dáil. They had sought a number of significant changes to the scheme, which they argue are essential.

In particular, the homeowners feel the legislation has been rushed through unnecessarily. They are deeply aggrieved that just two hours of debate was allowed for such a complex issue with a slew of proposed amendments.

“What we didn’t expect was for Dara Calleary to vote in favour of the two hours,” said Barbara Clinton, of the North Mayo Pyrite Group.

“It’s devastating. We are all in bits.”

Ms Clinton was among the group who sat in the public gallery for the debate. Homeowners were not allowed to wear T-shirts or facemasks bearing pyrite slogans.

“Did they want us to put paper bags over our heads?” said Ms Clinton.

When the vote was completed on Wednesday, homeowners chanted: ‘Shame on You’ at the TDs who passed the bill.

“That’s the reality. I don’t have it. I am left to watch my house crumble,” said the Ballina homeowner.

Ms Clinton said she feels “ignored” by the Government TDs and accused Dara Calleary of “selling his soul” at the expense of constituents.

“He stuck with the party and sold us out.”