Mayo Fianna Fáil TD Dara Calleary says he stands by his decision to vote with the Government on the Defective Concrete Blocks Bill. 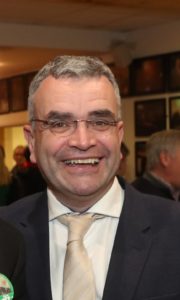 The passing of the Bill last week has angered many of Deputy Calleary’s constituents whose homes have been impacted by pyrite.

“If we voted against the legislation we would be keeping the old scheme on the table which is completely not fit for purpose,” Deputy Calleary told the Western People.

“There is still a lot of work to be done on the scheme. I am not denying that. But a lot of that work will be done through the regulations that are being prepared now as a consequence of the Bill passing. A lot of the concerns that homeowners have, a lot of them will be dealt with by regulations.

Deputy Calleary argued that if he had voted against the Bill he would have excluded himself from playing a role in improving the scheme and feels he can have a far greater impact from within Government.

“I wasn’t going to walk away from finishing that job by voting against the legislation.”

He received an angry reception from frustrated homeowners who were at the Dáil last Wednesday.

“It has been very difficult. I went down and met the homeowners at the front of Leinster House and they were very angry with me, absolutely. But I have outlined my reasons and will keep working on this.”

Sinn Féin’s Rose Conway-Walsh was the only Mayo TD to vote against the legislation.

“It was very hard seeing the homeowners in tears. It does something to your soul to see the devastation of people and families who have suffered so much already,” said the Erris Deputy. “There were a number of priority amendments (drawn up by homeowners and not included) that were very reasonable.”

The Sinn Féin TD fears the Government “is being wagged by senior civil servants”.